YIELDING, DEFLECTING AND COUNTERING IN ONE CONTINUOUS PROCESS 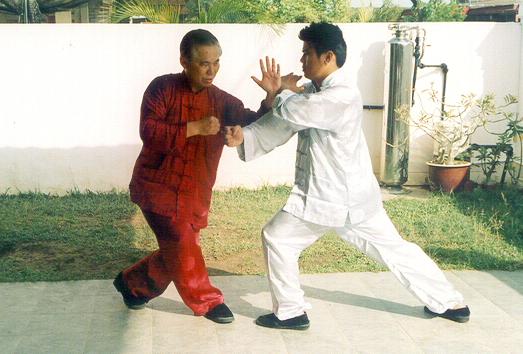 Originally posted by the challenger.

“'Tai Chi Chuan defensive responses generally move forward into the attack, rather than retreating from it. 'Peng' or 'Ward-Off' for example expresses dynamic forward motion both energetically and physically. So, if I respond to an opponent's jab or straight punch by advancing toward him with either foot while using 'Ward-Off' Form as played in the Set, I will be shifting my weight forward into a 'Bow and Arrow Stance'. I will also be lifting his outstretched arm and hand upward as I advance and will be rotating it outward to the side.”

I find his mention of shifting his weight forward into a Bow and Arrow Stance interesting because of the issues it raises on basic footwork and Tai Chi Chuan body movement principles that it appears to ignore. Shifting forward as suggested by the challenger not only gives his opponent an unnecessary advantage, it may also cause knee injury. It would be more difficult for him to defend himself if the opponent attacks him while he moves his body forward. These two problems are avoided if he rotates his waist instead of moving his body forward. Readers note that the key here is the importance of understanding the basic Tai Chi Chuan principle: that all movements are issued from the waist.

“I will also be lifting his outstretched arm and hand upward as I advance and will be rotating it outward to the side.”

This is an example of going against the momentum of the opponent, instead of flowing with the opponent's momentum and turning it against himself, as advocated in basic Tai Chi Chuan principles.

It is also an example of failing to appreciate the important principles of spacing and timing. Going into a jabbing attack, which is technically faster than a defending “peng” is enhancing the technical advantage of the opponent.

“Rotating it outward to the side”

Is a good move, but it is seriously weakened by advancing forward. 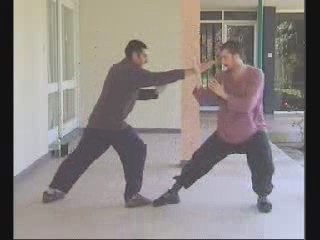 As I regard my challenger as a friendly sparring partner in this debate, and not as a deadly opponent, I left an opening for him to come in to attack me. In my post on his response to a jab or punch, I said that it was “inadequate”. I proposed a few other alternatives, one of which was to slap the opponent's jab or punch away with my left hand along with the opponent's momentum, and instantly thrust a right cup fist into his ribs, using the Tai Chi Chuan pattern "Punch Below Sleeves".

Earlier my challenger agreed that the examples he cited were low level because he found many forum members were not sifus. This implied that he had higher level techniques. So I left an opportunity for him to come in and “attack” me with his higher techniques so that we could have a debate, hopefully from which all could benefit.

But for whatever reasons, he did not take up this opportunity. So I would like to fill the gap myself. The technique he mentioned is also used in our Wahnam Tai Chi Chuan. In fact it is one of the first lessons my Sifu, Sifu Wong, teaches to Tai Chi Chuan students. The pattern to implement this technique is called "Immortal Waves Sleeves" in our school, and is called "peng" in Yang Style Tai Chi Chuan.

The challenger showed only the third (and last) part of the continuous process, missing the first two parts. I do not know about his intension in this case, but leaving out some parts was a common practice among Kung Fu masters in the past so as to preserve their secrets. But here I do not have to apologise to him for sharing the secret, because I am now talking about Wahnam Tai Chi Chuan and not Tai Chi Chuan in his school. Actually it is not much of a secret in our school. We not only teach this to beginning students, we also openly explain this to the public in our websites. If you look at the video clips in Sifu Wong's website, you can find a lot of examples.

The first part of this continuous process, here implemented in the pattern "Immortal Waves Sleeves", is yielding. The second part, which follows without a break from the first, is turning the opponent's momentum back to himself. And the third part, which again follows continuously from the second, is going into the opponent, and striking him if desired.

The movement, therefore, is not just going directly forward, as the challenger mentioned. First we yield, then we deflect, and lastly we return the momentum to the opponent, using his initial momentum. This is using the opponent's force against himself. If you miss out the first two parts, as in the challenger's case, it is using force against force.

If the opponent's attack travels from north to south, for example, the first part of the countering process is from north-north-east to south-south-west. This is the yielding part, and the movement is not executed by the hands but by the rotation of the waist.

The second part, which deflects the opponent's attack and turns it against him, travels from south-south-west to north-north-east. The change of direction is not abrupt or angular, but smooth and circular, and is in three dimensions. The movement is again not executed by the hands but by rotation of the waist.

The third part, which is using the opponent's force against himself, continues from south-south-west to north-north-east or north-east. Here the hands move as a continuation of the waist rotation. All the three parts, which represent yielding, deflecting and countering, are in one smooth continuous movement. 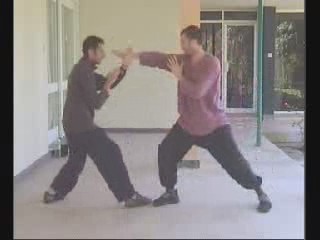 Originally posted by the challenger. “Simply leaning backward to avoid a blow, such as Western boxers often do.”

Ah, it seems it has now become a question of semantic. For me, the above is not an example of yielding in a Taijiquan or Shaolinquan context. But I suppose it is the broad sense of the term (i.e "giving way to").

Interestingly, because I am French and didn't know the English term before I learnt it from Shaolin Kung Fu. I associate it with the actual technique (i,e "neutralizing", or "swallowing", or something like that - it is easier to demonstrate than to describe!.

Anyway, I certainly hope the challenger can "neutralize" Marcus' points by something else than not posting anymore - it would be a shame as we start to uncover the dark secrets of yielding

At last, for those of you like myself who accept that "a picture paints a thousand words" here's one better, a video . This video (picture stills of the video with explanation can be found here ) illustrates clearly that "Yielding" is a continuous, and not an isolated, process.

This is not an advance level teaching in Wahnam Tai Chi Chuan, it is taught to beginning students in their first lesson of pushing hands.