Way back in post 1 of this thread I wrote:

“Yielding is to lead the opponent to futility, then his attacking momentum is turned against the opponent himself, thus completing the yang part of the yin-yang harmony. This continuous process is expressed in Chinese as 'xian hua hou ji', which means 'first neutralize then attack'. In Shaolin Kung Fu it is expressed as 'dun du', or 'swallow-shoot”.

Here is an example of Dun du, or Swallow-Shoot, taken from my personal favourite, the Dragon-Tiger set:

Suppose I have just pressed and attack forward against my partner using the pattern “A Lohan Goes out of the Cave” see fig1.

Because my body is leaning forward it becomes a tempting target for my partners attack. No matter if the attack is a kick or a punch I can respond with “To Tame a Tiger with a String of Beads” see fig2. Shifting of the body from the front leg to the back leg, without moving the legs, to ward off an attack is an expression of the “Swallow” technique.

After my partners attack is spent I “shoot” forward to attack him using “A Hungry Tiger Catches a Goat”. See fig3. 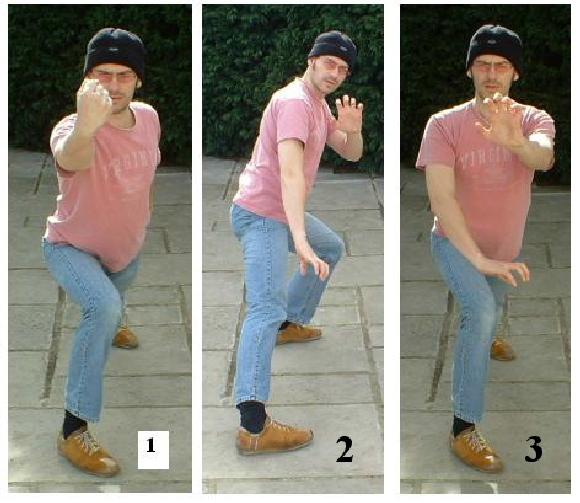 I have been following this thread with interest, not the unpleasantness, the actual part about yielding. Although I don't practice kung fu, I wondered if my limited experience of fencing might bring some insight.

I practice 15th century based Italian style fencing for long sword (hand and a half sword-Fiore dei Libeiri). Ok, in its basic form we also train unarmed to learn good stances and wrestling/grappling, as well as locks and throws. If the footwork is poor in unarmed form, then you can forget about the rest, be it with dagger or long sword.

As we have been taught about yielding, the above pictures by Sifu Santer would to my mind resemble more "avoidance". This is just my opinion though. For me, yielding involves making and maintaining contact with the incoming fist/blade, and moving so as to "steal" the energy/force and putting this back onto the attacker.

I am talking purely physical force here, not internal. This can be done by shifting the body weight back onto the back foot and pivoting from the waist, but it can also be done by moving forward into the oncoming attack. Not directly, but obliquely, so that you are not trying to stop force with force, rather to redirect it. This forward movement can be done to the inside or outside of the attacker, and once you have stepped off the attack line, you have closed your own line and opened his, leaving you free to counterattack.

With a blade, the principle is exactly the same but easier to see. Suppose an attacker stepped forward and struck a downward blow at 45 degrees from your left to right. With your right foot leading you could for example step obliquely forwards and "away" from the blade, raising your sword with the hilt held high and to the right, thus covering your head and body. As the blades make contact, you don't try to stop the blow but keep the wrists relatively relaxed, thus yielding to the attacking blade.

This energy is then "stolen" such that your own blade arcs around and back to the attacker. A second small step with your back foot puts you back in guard position but now offline. However hard the attacker strikes, by stealing this energy, your sword will be directed back at him all the faster.

Apologies for the long-winded description, and my apologies if this is totally off-topic.

I really enjoyed your post, thank you for sharing. Your point about the Dragon-Tiger picture sequence appearing to demonstrate "avoidance" is well taken. This was a demonstration of Dun Du or "Swallow-Shoot".

Perhaps a better demonstration of yielding in Shaolin Kung Fu would have been Combat Sequence 6 "Dark Dragon Draws Water". If time permits in the next few days I will take some photos and post them here. Though you can also view them by following this link .

Today I'd like to share with you pictures taken from the Wahnam Tai Chi Chuan Pushing Hands Series 1 that demonstrates "Xian Hua Hou Ji" or "first neutralise then attack".

Picture 3 shows Riccardo sinking his body backwards to "swallow" Javier's force and deflect his arm to the right in a smooth circular movement.

In Wahnam Tai Chi Chuan this sequence is repeated many times.

For a much better and fuller description click here .

I'm happy to see the discussion carrying on. It is fascinating how many different interpretations there can be about the same word "yielding." Personally, I find the comparisons to weapon arts interesting. Nevertheless, I hope that my classmates and I can somehow clarify the concept of yielding as we have learned it from Sifu Wong, specifically in relation to Shaolinquan and Taijiquan.

Quote from Kevin
“For me, yielding involves making and maintaining contact with the incoming fist/blade, and moving so as to "steal" the energy/force and putting this back onto the attacker.”

In Shaolinquan, I don't think it is necessary to maintain contact during the yielding phase. You can "neutralize" the attack without any contact. An example may help:

Imagine that someone is about to forcefully push open a door that they think is stuck. If, at the last moment, you open the door, then they will stumble forward on their own accord. No contact was ever made with the door.

Similarly, if someone punches forcefully, I can "open the door" at the golden moment by shifting the target (i.e. my body) backwards. This not only neutralizes the attack, but also puts the attacker at a disadvantage. His old strength has been spent, but his new strength has not yet been created.

During this gap, I can apply the pattern "Dark Dragon Draws Water." With one hand, I "tame two with one", effectively controlling his entire upper body. At the same time, I strike with the other hand to his ribs. The effect is such that I use his energy against him. Not only does the yielding cause him to "tangle up" his arms, but he also "crashes" into my Dragon palm with his body.

I think those of you who have learned this pattern will know exactly what I am talking about. The entire process -- yielding, taming, striking -- happens in one smooth, continuous movement. If you don't know the counter, it is a terrible pattern to run into.

I just remembered that my latest promotional video has a short segment with Shaolin Wahnam students practicing the pattern "Dark Dragon Draws Water". These are students practicing, not demonstrating, but I think the video gives a decent visual explanation of what I was describing in my last post.

You can find this segment at about 36 seconds into the video.

What is Shaolin Kungfu? .