THROWING AN OPPONENT WITHIN THREE SECONDS 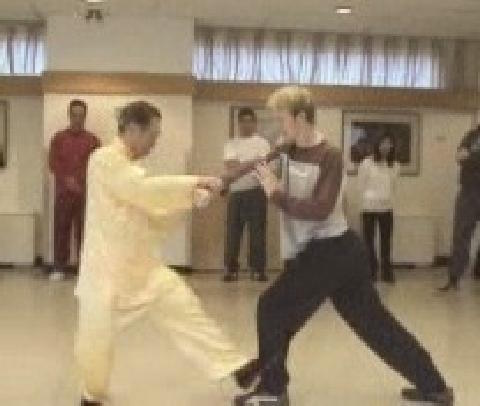 Although Alex knows the counter-technique, still he could not avoid being thrown onto the ground by Sifu Wong

“At the advanced stage of the training session, even for beginners they would be able to implement this technique in a second, which is about the time the attacker completes his initial attack and begins to recover from his initial move.”

I just did some experimenting, and it seems that I can do the technique in less than a second. The technique actually begins during the opponent's attack, making it quite fast, tactically. See here for more on the subject of tactical speed .

Actually, back in my Karate days, we often used a crude version of this technique in sparring. Tactically, it was much slower. And yet even that technique worked amazingly well in full contact free sparring. 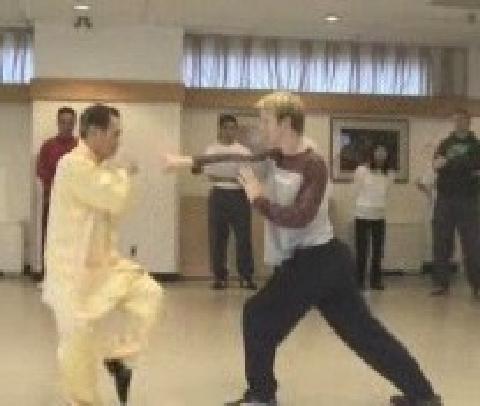 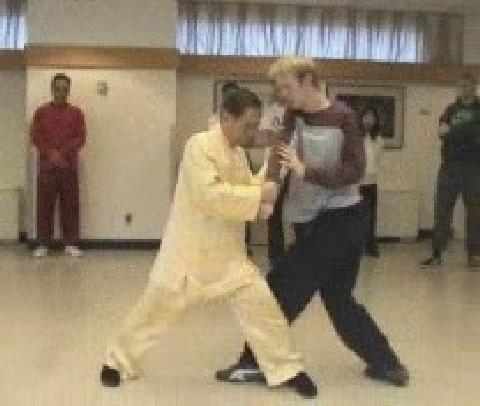 Challenger
a grandmaster of another school
14th March 2006

I am familiar with the technique shown, and have no objection to it per se, but only to the scenario in which it is applied. I seriously doubt that many people are capable of performing 3 or 4 steps with full weight shifts as shown in the 3 seconds time allowed for beginners ... essentially the time it takes to quickly say "one thousand and one, one thousand and two, one thousand and three".

I am even more skeptical that anyone other than an experienced Master can realistically perform all of these actions effectively, and with good balance and body control, in 1 second or less...i.e. the time it takes to quickly say "one thousand and one"! Thus, unless the average defender possesses 'Supersonic Speed' that others do not, the scenario depicted will probably require too much time to apply. And so, I guess anything is possible, but some things remain highly improbable.

I actually remember also doing some sparring with one of my Sihings (I won't mention him by name as he may or may not want to get involved) here in Switzerland. I certainly landed on the floor well within a second --- and am still grateful for that lesson from him.

“He (Sifu) asks them to “Really throw me.” and when the student expected to find Sifu on the ground, he found himself on the ground instead! It is an inspiring experience. It awes us to the beauty of Wahnam Tai Chi Chuan and Shaolin Kungfu. I invite anyone who has had such an experience to share it here with us.”

In the most recent Kung Fu course held in Toronto, Sifu had kindly picked me to demonstrate flowing/intercepting, tiger claw, using the opponenets force against himself, and tactical speed. That was an experience and a half that I will never forget.

On the 'flowing with the opponents force' aspect, Sifu put me in a simple chin-na grip, holding my wrist and pressing my elbow. I countered this with “Hide flowers in Sleeves” followed by a “Precious Duck”. (The “Hide Flowers” follows the momentum, and a turn of the arm releases the grip. The harder the "attacker" tries to execute the elbow-lock, the easier it is get out of!).

Sifu countered my “Precious Duck” with a “False-Leg Hand Sweep” aimed at the outside of my elbow. I followed this momentum, and brought my arm round to attack Sifu's temple with a hanging fist (“Reverse Hanging of the Golden Lotus”).

Now this was the part that amazed me. Sifu threw me to the ground. I could see it coming, I knew the counter. Yet Sifu still managed to get me in a complete tangle, with both my arms wrapped around one another, and my legs falling over themselves. He had performed “Fell Tree with Roots”, added with a simple hand movement to get me to the ground. I just couldn't help but laugh at the situation I was in, and how simply he had got me under his complete control.

The discussion at the moment seems to be focused on the “Fell Tree with Roots” technique. I agree that, at first, it is a slow technique shifting weight and all. But over time, the shifting of weight becomes subtle, and 'just enough' to avoid the opponents attack. With this, the technique can be performed very quickly.

Yet what is really important is, you probably guessed it, the skill involved. I may be able to perform the technique in under a second (not there yet, but for the sake of argument), but if I am not skillful enough to control the opponents arms and legs correctly, I may find myself walking into a palm-jab at my ribs or eyes, or even a snap-kick to the groin.

A quick point to mention on the technique itself is that the arms are not the main throwing "weapon". In fact, the whole body is used to throw the opponent, by a sink in the stance, or in changing the stance. Again, if the skill isn't there, it's going to be as much use as a chocolate fireman, and what I think is going to give me victory will actually give my opponent the clinch he needs to secure himself a win.

Warm regards to all

Sifu Wong throws Alex onto the ground despite Alex knowing the counter. All these movements are impromptu, and the pictures are extracted from a video recording.

I did the technique sooooo fast that no one saw me do it!

It seems to me that each situation has it's own requirements. Where I find myself very close to my opponent a throw is a good option. If I find further away then I'm not going to waste time moving in, I'll use a longer range technique. Spacing, not just timing.

Back to the yielding, we can also react to the opponent's movements. If he is put off balance as I shift my weight forward after the sink I can easily keep the momentum going as I do the throw.

If the opponent however presses back against my move or plays me at my own game by yielding then I must react accordingly.

What is the perfect yield? There isn't one shoe for all feet.