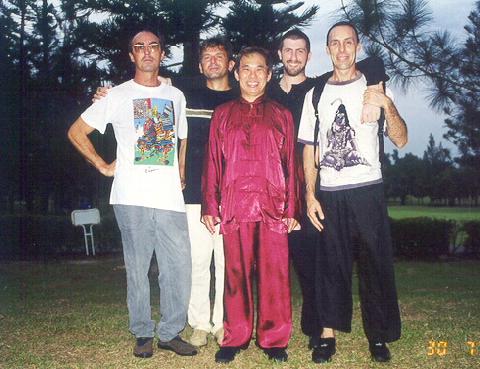 Sifu Wong and some of his Wahnam Taijiquan instructors at the Special Taijiquan Course held in Malaysia in July 2002. From left: Attilio, Ricardo, Sifu Wong, Jeffrey and Roberto.

The following discussion is reproduced from the thread Using Taijiquan against Western Boxing posted by Sifu Jeffrey Segal, Chief Instructor of Shaolin Wahnam Australia, in the Shaolin Wahnam Discussion Forum on 3rd September 2003.

I'm slowly making my way back to Zurich after 2 months in Australia and as it would be a shame to fly over Malaysia without stopping to say hello, I wrote Sifu an email telling him that I was in the neighbourhood. He generously invited me to join in the last training session of the current intensive Shaolin Kungfu course and took the opportunity to explain and show some of the many counters that we have at our disposal in Wahnam Taijiquan to use against Western Boxers. During a sparring practice against martial artists of different styles, Roberto (on the right side) used a firm but flexible stance against a Western Boxer, posed by Inaki. Such a stance enabled Roberto to swallow the Boxer's fast punches, then counter-attack effectively.

So, what can we do against a fast agile Boxer? Slow down and use our firm but flexible stances. Swallow his punches by sinking back and turning the waist to deflect them so that we control both his arms with just our lead arm. One very suitable pattern is “Green Dragon Shoots Pearl”. To obtain extra reach we can also deflect his punch using the Unicorn Step, advancing into Bow Arrow to shoot or present the pearl.

Another principle that can be applied is using long range techniques against short range techniques. This can take the form of kicks, particularly side kicks as found in Wahnam Taijiquan and Chen Style Taijiquan and surprisingly enough, “Single Whip”, which works on the same principles of swallowing and counter-attacking described above. In sparring against a Western Boxer, posed by Ricardo, Jeffrey used the tactic of “long against short”. A side kick like this one shown above is effective not only in keeping the Western Boxer at bay but also in exploiting his comparatively limited range of counters against kicks.

As is always the case, it's not enough just to know the correct techniques. Systematic practice both alone and with partners is absolutely necessary.

I hope this gives some answers to those of you who were pondering this matter. Many thanks to Sifu for taking such an interest in the forum and for sharing these pearls with us. As for me, I'm going to go and join Sifu, Simu, Linda, Neeta, Gordon, Michael, Chris, Pascal and Peter (the last 5 being participants in the Intensive Shaolin Kungfu Course) for their well deserved graduation dinner at one of my favourite Chinese vegetarian restaurants