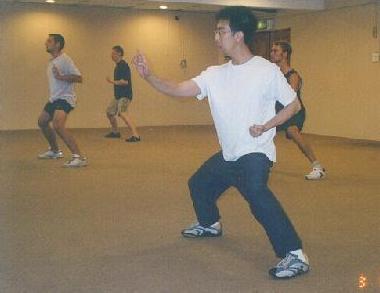 Students at an Intensive Shaolin Kungfu Course in Malaysia in September 2003 practicing One-Finger Shooting Zen, which is an excellent exercise to train chi ("qi") as well as "jing" and "shen". From left: Peter, Chris, Michael and Pascal.

The following discussion is reproduced from the thread Striking Across Space.

We all have chi, otherwise we would not be alive. However, without training, few of us are sensitive to it. In chi kung, we not only develop a greater sensitivity to the chi within our own bodies, but also learn how to tap into an unlimited source of chi around us.

Can you please describe these?

Remember that most people do not believe in chi. Many people argue that chi is just "air," forgetting that past masters described chi as energy long before anyone had a concept of "air" as we know it today. Others argue that it is just a metaphor for proper body alignment. Still others argue that it is nonsense. These are the people who probably wouldn't believe the things I do on a daily basis.

Most people will not believe that, every morning and every evening, I literally tap into energy from the cosmos (i.e. the sky, the heavens) and absorb it for myself.

Most people will not believe that I can "breathe" energy into my abdomen.

Most people will not believe that I can internally sense acupoints (the same ones as in acupuncture) using just my mind and my energy. At my level, I can only sense a few, like the Third Eye, Laogong (palm), Yingxiang (base of nose), and Baihui (top of head). In time, I'm sure I'll "find" them all.

Most martial artists, even if they knock forearms with me in Three Star Hitting, will not believe that my force comes only from internal methods. They might even call me a liar when I say that I do no external forearm conditioning.

Most people will not believe that I can manipulate my own energy and direct it to various parts of my body. For example, yesterday, I sprained my thumb while repairing a computer at work. I channeled energy to it last night and this morning. Tonight it feels fine.

Most people will not believe that, when I perform an exercise like One Finger Zen (Yi Zhi Chan), my hand shakes (albeit slightly) not from dynamic, isometric tension but from the internal force running down my arm.

Most people will not believe that I have experienced chi coursing through me with such vigor and strength (during Self Manifested Chi Flow) that it literally knocked me to the ground.

Of course, many people here (i.e. members of the Shaolin Wahnam Discussion Forum) will have no trouble believing all of these things because they have had similar experiences on their own. These people are not most people. 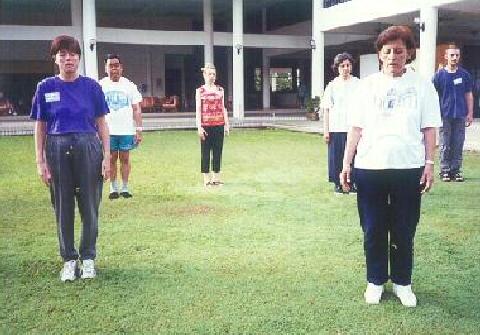