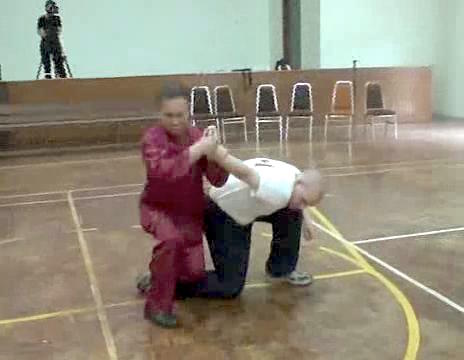 This strategy is often used in chin-na. I give a feint attack to tempt an opponent to respond

After reading the attacking strategies, I kept thinking about the first one of them: "Stomp the grass to scare the snake." As I had no idea about what this strategy meant I searched for some information on Internet. What I understand is that one can launch a brief and direct attack and observe their opponent's reaction. That will uncover his strategy.

Based on this understanding, I formulate my questions below:

If one launches a direct and brief attack in order to undercover the opponent's strategy, wouldn't that be too risky? Should he then use this strategy only when he is totally ready for attack? Then, in which situations would it be good to use this strategy? Would it be a fake punch an example of this strategy?

To make it clearer, let us list the steps of the strategy, “Hit Grass Startle Snake”:

What you described was only Step 1, or at most 1.5. The enemy might revealed his strategy as a result of your feint move, but he had not responded in action, and you had not defeated him.

To be successful in applying this strategy, you do not just make a feint move, but also anticipate what your enemy would do, and have all the preparation ready to defeat him when he makes the expected move. If you have sufficient resources, you may have a second and a third anticipation, and a second and a third preparation. If you don’t have sufficient resources, you have to modify your response if the enemy does not move as expected, or call off the counter strike. Strategies, like kungfu moves, are alive.

Safety first is the first principle in all combat – in kungfu as well as in warfare. When you make a feint move, you must ensure that yourself or your soldiers are safe.

When you make a feint attack to an opponent’s head, for example, purposely leaving an opening to your ribs for him to attack, you must be ready to exploit his attack to defeat him, not to be hit by him even when you anticipated his attack. But if he retreats, which is your second anticipation, you should be able to move in safely to defeat him.

When Dr Daniel of Belgium took me to visit Waterloo many years ago, I bought all the military books available. I was very surprised that all the books described the same thing – victory depended on sheer number. If a general had more soldiers than his enemy, he would send his soldiers in to charge, sacrificing the front lines, and defeating the enemy with the remaining extra soldiers.

This contrasted sharply with what happened in the Sino-Vietnamese War of 1979. The Chinese general, who was Shaolin trained, sent in dogs to test the ground before sending in soldiers.

The success of a strategy depends on the skill of the person using it. If one launches a feint attack and uncovers his opponent’s strategy but does not follow up with victory, he is not a strategist, at best he is a reader of strategies. In the hands of a strategist, a feint move is never risky. 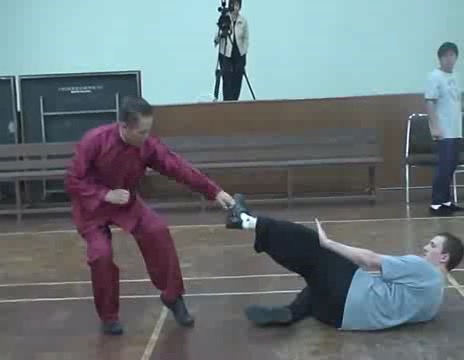 After warding off my attack, an opponent counter-attacks.

Yes, a strategist should use his strategy, any strategy, only when he is totally ready, not necessary for attack, but sometimes for defence or other purposes. In the Sino-Vietnamese War of 1979, for example, the aim was not to attack Vietnam, but to demonstrate to Communist countries in particular, and the world in general the inability of Soviet Union to help Vietnam even when Vietnam was used as a pawn in the Sino-Soviet quarrel.

At that time China constantly addressed the United States as a paper tiger, i.e. a tiger for show but without real power, like flowery fists and embroidery kicks. China could be using the strategy of “Point Mulberry Scold Acacia”, i.e. pointing at the United States, but actually scolding Soviet Union. The Sino-Vietnamese War was a demonstration of this strategy.

This war had long term consequences that many people may not realize. I believe it had great influence on the subsequent break-up of the Soviet Union and the emergence of many new countries, including present day Russia.

The strategy, “Hit Grass Startle Snake”, is very useful in situations when you are not sure of defeating your opponent openly, or not sure of your opponent’s next move, and temping him to make a move so that you can defeat him even when at normal times he is superior.

A feint punch by itself is not an example of this strategy. When used in the strategy, it is only the first step, as illustrated in the 3-step procedure above. The other two steps are to tempt him to respond and to defeat him in his response.

You must be ready with more than one main anticipation. If he does not respond as expected in your first anticipation, you are ready with other moves to defeat him in other anticipations. If his response is very odd, different from all your anticipations, you have to let the strategy pass, and wait for another opportunity.

You must live to fight again, in sparring and in real life – a very important principle many martial artists today do not appreciate even when they talk about it. They just fight without knowing whether they would win, but they do not bother if they die in the fight. Looking at sparring today, it is shocking that combatants have no regard at all for their own safety.

If a general wants to launch a secret attack on an enemy, he would not hit the grass to startle the snake. That was what Israel did in the attack on Egypt in the Six-Day War in 1967. Egypt was caught by surprise.

When a housing developer wants to buy premium land, for example, he would do so quietly, instead of making a public announcement which may arouse the interest of other competitors. If he publicizes his intention, it is for other purposes using a different strategy, like purposely raising the price of land so that he can later raise the price of his houses for sale, using the strategy of “Throw Stone Attract Jade”. Strategies are alive. Their success depends much on the strategist. The Attacking Strategies course in Ireland is going to be a lot of fun where course participants will learn and practice how to be strategists making their strategies alive so as to enrich their lives and the lives of other people. 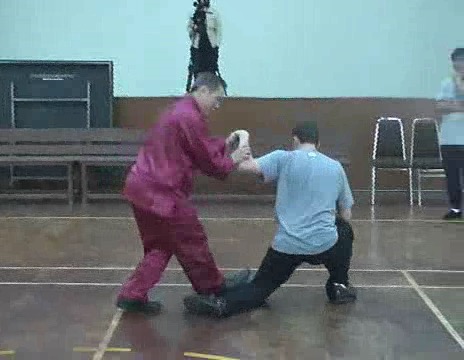 I move in with a chin-na technique.