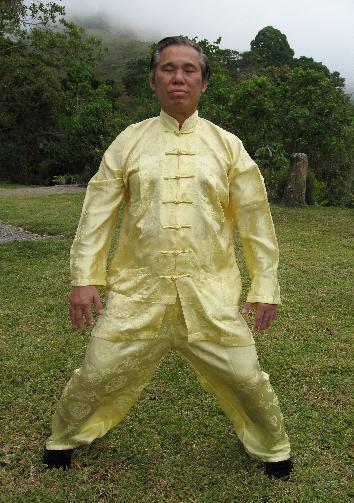 When I started with Zhan Zhuang I diligently followed your advice, to relax and to be focused. After I reached a certain level my mind would not only be focused on my dan tian anymore but being everywhere.

Then I would love to learn how the Cosmos mode in Shaolin Kungfu would differ from the Expansion mode in Xingyiquan physically, energetically as well as at the mind level?

I was very impressed with your zhan zhuang training at the start of your kungfu career. I remember that you could hardly remain at any stance for a few minutes, but through sheer dedication and diligent practice everyday, at a time even when you were holiday in Vietnam or Lao, you could eventually remain at a stance for an hour! As a result you developed tremendous internal force and at the same time remained very agile. Your nick-name of being a gorilla was aptly earned.

What was even more important was that you started with bodily pain everyday when you were a trainer for top sportsmen. You thought, wrongly at that time, that being in pain was part of the training for world top sportsmen. But eventually you became pain free. I still remember your joy when your reported to me that for the first time you felt free from pain. That, indeed, was a remarkable achievement. It was to me more significant than winning an Olympic title. It was an inspiration for all sportsmen and top trainers. You demonstrated from direct experience that it was possible to be pain free and still remained at world’s top level.

Your progress from being focused at your dan tian to being everywhere is a natural development, but it is a rare development that happens only to high-level masters. Masters in the past would need at least 20 years of training to arrive at this level. Some critics would be angry and asked how long had you trained? I don’t actually keep count of the years you have been training, but I would estimate that you would have arrived at this level with less than 10 years of training. These critics would not believe in your attainment, and that is their business. What is important is that you have benefited much from the attainment, which is similar to what was described that past masters had attained.

What benefits can one get when he has progressed from focusing on the dan tian to being everywhere. We can learn a great lesson from Yagyu Tajima, one of the greatest Japanese swordsmen. Yagyu Tajima said that when a swordsman’s mind was focused on any one part, like on his sword, he could use his sword expertly, but he might not be able to use other parts expertly. But if his mind was everywhere, he could use all parts expertly.

Interestingly, Yagyu Tajima attributed his expert swordsmanship to his Zen training, and not to his sword techniques. His Zen training enabled him to be present everywhere.

The development from a wandering mind with myriad thoughts to a one-pointed mind to a mind that is present everywhere is a progress of mind training. First we bring the mind to one, then we let the mind expand to zero. It involves the processes of taming the mind, strengthening the mind and nourishing the mind.

Like most senior practitioners, you may think that your development from the focus mode to the Cosmos mode was unintentional. But actually it was the result of the many courses you had taken. Those who did not take the many courses like you did, would not have this development.

Basic courses like Generating Energy Flow and Five-Animal Play tames the mind, More advanced courses like Flower Set, Sinew Metamorphosis and Dragon Strength strengthen and nourish the mind. In basic exercises like the Eighteen Lohan Hands and the Eighteen-Lohan Art you bring the mind to one. In more advanced exercises like Cosmic Breathing and Merging with the Cosmos, you let you mind expand to zero.

It is helpful to remember that terms like Cosmos mode in Shaolin Kungfu and Expansion mode in Xingyiquan are not scientific terms with rigid definition, but chi kung and kungfu terms meant for convenience and better understanding. Hence, unlike rigid scientific terms, the meaning of chi kung and kungfu terms may vary according to different situations.

Generally, in the situations we normally use these terms, Cosmos mode is where we let our mind pervade, and not abide to anything. Instead of being in a Cosmos mode, if a student is in a focus mode in performing a combat sequence, he lets his mind abide to that sequence. If his partner responds accordingly, the student will be able to perform the sequence expertly. If the partner makes a mistakes or purposely goes out of routine, the student will be unable to cope with the different response.

But if the student has progressed to the Cosmos mode, and let his mind pervade in everything instead of being focused on his combat sequence, he will be able to handle the unexpected response from his partner. It is the same in actual combat or in daily life.

The Expansion mode in Xingyiquan is specially used when students practice the Santi Stance. They let their internal force expand out from their body, instead of internal force focusing at their dan tian.

These three aspects of the physical, energy and mind are not just applicable to the examples above. They also generally apply to other situations. In other words, in daily life, for example, the Cosmos mode applies to moving activities with the mind spread over all the activities, whereas the Expansion mode applies to static activities with energy expanding out from the centre.

You are in a restaurant making an order, but a waiter is not paying attention. While physically static in your seat, you may let your energy expand into your voice to ensure that the waiter takes the right order. This is the Expansion mode in daily life. 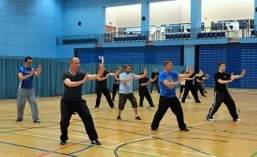