WE NEED TO EAT, DRINK AND BREATH 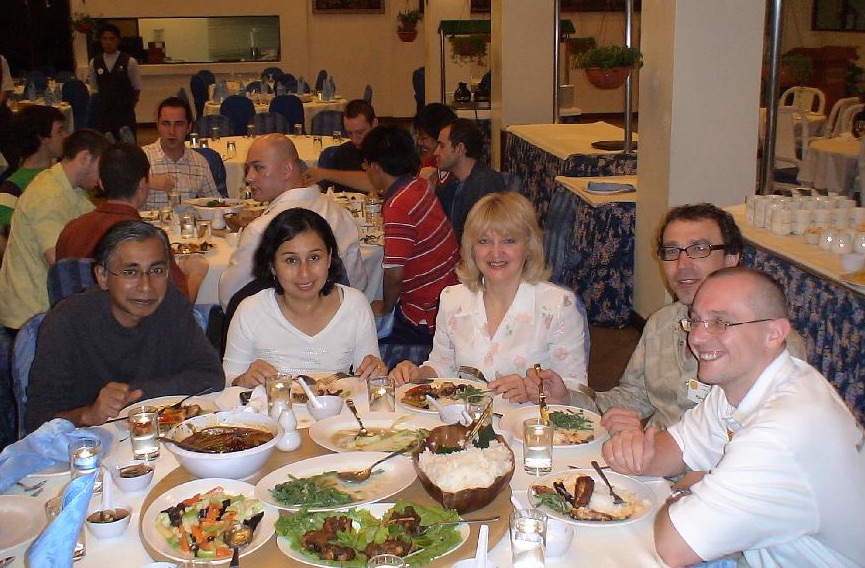 Students at an intensive course in Sabah enjoying delicious food

Seemingly one does not necessarily need to eat neither drink (do you?) nor breathe. Why do most animals then do need to do those three things to survive. Isn't it easier to just breathe cosmically rather than care about getting sufficient food all day long etc?

When in the mothers womb you don't breathe either, but pulsate with the Cosmos. So why gets this connection cut and we start breathing? Is there any life form except humans which do or can do "cosmic breathing" in a wider sense?

Some very rare exceptions may not eat or drink, but they still need to breath. Many years ago I practiced “bigu”, which literally means abstinence from eating grains, for about 20 days and found myself with more energy and more mental clarity than usual although I did not eat any food. As this happened many years ago, I can’t remember now whether I drank any liquids, as my experiment was on not eating. Even if I drank, it wasn’t much — certainly not like the amount of delicious orange juice I drank when in Spain.

But I still breathed. At that time I did not know Cosmic Breathing, at least not consciously. So I breathed with my nose and mouth.

The word breathing in Chinese, which is “hu xi”, means an exchange of energy. It does not mean an exchange of air, though many modern Chinese, including modern Chinese chi kung masters, may not realise it. This term, “hu xi’, was used long before air was “discovered” by scientists, though air had been with us all the time.

When we perform Cosmic Breathing, we do away with air as a vehicle. If air gets into your stomach, you could be in big rouble. We take in fresh energy from the Cosmos directly when we breathe in, and give out used energy form our body when we breathe out.

Animals, like human, need to eat, drink and breath to survive. Even when animals hibernate, they still need to breathe. The chi kung we practice is meant for human. I leave chi kung for animals for others who may be interested. So I don't know whether some very rare animals practice Cosmic Breathing, irrespective of the name the animals may call this art or natural ability.

Your statement that it is easier to just breathe cosmically rather than care about getting sufficient food all day long, is also wrong. It is not easier to practice Cosmic Breathing. Students in our school are lucky. They have a chance to practice Cosmic Breathing and do away with finding food if they want to. Yet not all of them take the opportunity to learn it when this course is offered, which indicates, though it may not be conclusive, that they, often unconsciously, regard normal breathing via their nose and mouth easier than Cosmic Breathing.

People, even in countries where food is not easily available, do not have to find food all day long. Even when we take the term “all day long” figuratively, many people spend less time finding food than loitering about.

I don’t know where you live, but if you live in Western Europe, the United States, New Zealand or Australia, you don’t even have to spend any time finding food. If you are lazy to find food, your government will feed you. If you do not want to eat solid food, like if you fast in protest that Cosmic Breathing is not taught to people to replace finding food to eat, doctors will feed you liquid food in the form of glucose drips.

You also have forgotten another important point. Most people we know do not eat to survive. We eat because we like eating. Initially I did not find the food in some countries, like England, Switzerland and Germany, palatable, but now I find it delicious — much thanks to the organisers who take effort to scout for food to enjoy, not to survive.

When you were in your mother’s womb, you breathed. You did not pulsate with the Cosmos — I don’t think you knew Cosmic Breathing then. But your mother supplied you with fresh energy and take away your used energy through your quan-yuan and ming-men vital points. Your mother gave you life. This is one of many reasons why you must always be grateful and kind to your mother.

Why did you cut this connection of receiving energy from your mother, which was necessary for your life, and start breathing like what normal people do by breathing in and breathing out air through your nose and mouth? You may not know the answer, but I can tell you.

Your needs when you were in your mother’s worm were also different from your needs now. In your mother’s womb, you were warm and comfortable, and you did not have to do anything, except moving about occasionally which gave your mother joy, and sometimes pain, which she lovingly endured. Now you have to find your own food, which includes breathing in air that contains energy, drinking liquids, and eating material which preferably you like.

Yes, there are also life forms besides humans which do and can do cosmic breathing. Unless you live in a desert, you can normally find a lot of examples if look around, except that you may not be aware of their ability. The great variety of plants, including all kinds of trees and grasses of all sizes and shapes, do this as their norm. They don’t breathe like humans do.

There is a kind of plant or animal known in Chinese in Cantonese pronunciation as “toong choong ha choe”, which means “winter worm summer grass” that can also do cosmic breathing. I don’t know its English or scientific name, but I know that, as its name indicates, in winter it is a worm and in summer it is like a blade of grass. I don’t know whether as a worm in winter it does cosmic breathing or breathes like humans or as a worm does, but it certainly has to breathe so that it lives and can be like grass in summer, during which time it does cosmic breathing. You may be able to see it, or buy it to keep as a pet if you are willing to pay the price as it is an expensive item, in some Chinese medical shops. 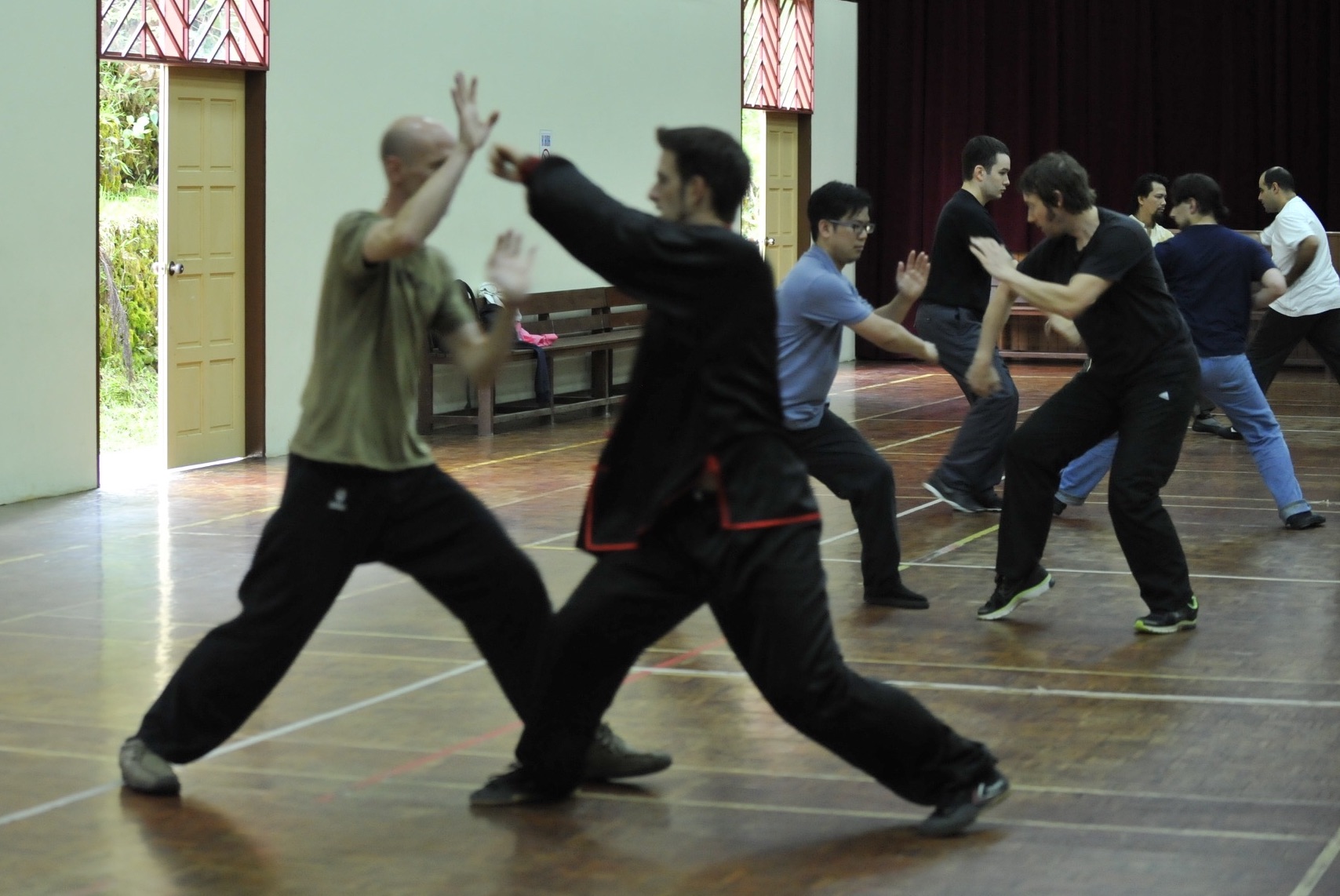 Participants at an Intensive Shaolin Kunngfu Course in Sabah did not have to breathe normally during sparring; they used cosmic breathing