HOW WOULD ZHANG SAN FENG VIEW THE LEGACY COURSE? 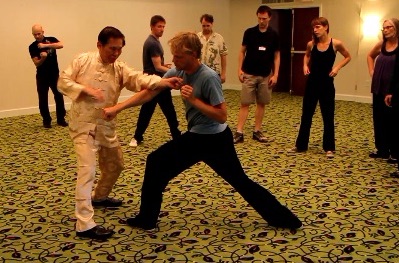 Sifu has noted that Zhang San Feng was probably the greatest martial artist ever. My questions are as follow:

If Zhang San Feng were alive today, what would Sifu wish to learn from him?

Zhang San Feng is celebrated as the "inventor" of Taijiquan. Probably based on his previous Shaolin training, Zhang San Feng developed this complete system which, I believe, covers all aspects from health to internal force, from martial skills to spiritual cultivation, etc. Can Sifu please share his thoughts as to why others later found it necessary to develop other Taijiquan styles from this already compact, complete and highly efficient system?

If Zhang San Feng were alive today and willing to teach me, which will be a great honour for me, I would like to learn from him how to live in this phenomenal world for more than 200 years.

I was a very good student when learning from my four sifus, Uncle righteousness, Sifu Chee Kim Thong, Sifu Ho Fatt Nam, and Sifu Choe Hoong Choy. But I might not be a good student if Zhang San Feng asked me to abstain from eating delicious food like Portuguese grilled prawns, Spanish jamon and Latin American steak.

Honestly I think the great Zhang San Feng would be very surprised when viewing the Legacy course I shall teach at the UK Summer Camp. In all probability he would say, “How could you teach my legacy in five days? I took more than 30 years to attain what you will teach.”

In terms of content, Zhang San Feng might say, “The patterns you will teach are not the same as those I performed but the principles and practice are close enough. And why do you reveal the secrets of internal force so readily. I didn’t use the terms ‘flowing force’ and ‘consolidated force’, but they describe quite accurately what I did.”

In terms of teaching methodology, Zhang San Feng might say, “What is this video thing about the Wudang set you name after me? You mean they learn the set before even attending the course? My students would take a few years to learn a kungfu set, with me supervising them everyday. They would also take many years to develop internal force. But you do that in five days? You must take care that your students don’t over-train.”

In terms of potential achievement for the course participants, the great Taoist patriarch and sage might say, “Overcoming pain and illness? My students didn't have this problem. They were already healthy before they started learning kungfu from me. Being combat efficient? Of course! I don’t want my students to make a mockery of the martial art they practice. But like you, combat efficiency, though important, is not our priority. Our priority is to return to the Tao.”

“But what are these shoots and pin-downs, and Muay Thai knee jabs? If these attackers fought that way, my students could kill them with palm strikes on their head. But we won’t kill them. We would throw them about like little boys.

“Applying what they learn in daily life? That is not my concern, nor the concern of my students. I and they have done that before we come to the Wudang Mountain to cultivate. But if your students still live in the phenomenal world, that is an excellent achievement for them. But wait. You are the first kungfu master I know who has this aspiration. All other kungfu masters taught their students how to fight well.”

“And did you say you would teach Taijiquan and call it my legacy? What is this Taijiquan? I haven’t heard its name before. What I teach was Wudang Shaolin Kungfu.”

“But the most amazing is that you want to teach my legacy in five days! Anyway I wish you all the best.”

Yes, the Wudang Shaolin Kungfu that the great Zhang San Feng “invented’, which was called Taijiquan a few centuries after him, covers all aspects from heatlh to internal force, from martial skills to spiritual cultivation. It is, in my opinion, the climax of not only Shaolin Kungfu development but the climax of all martial art development.

Zhang San Feng lived to more than 200 years, and was healthy and full of vitality before he eventually merged with the Tao. This gives an idea of the benefits of his legacy in terms of health.

Zhang San Feng was peaceful, happy and free, had many glimpses of Cosmic Reality, and eventually merged with the Tao, which is the highest spiritual attainment any being can attain. This gives an idea of his legacy in terms of spiritual cultivation.

When his legacy is already compact, complete and highly efficiecnt, why was it that others later found it necessary to develop other Taijiquan styles? It was because of various factors. Not many people, for example, had the opportunity of Zhang San Feng’s students, nor the ability of Zhang San Feng himself. Others might have learned the art much modified due to passage of time, and further modified it when teaching it to others due to meeting expedient needs.

Chen Wang Ting, the First Patriarch of Chen Style Taijiquan, for example, was a scholar-general. He spent most of his life leading an army, not cultivating or practicing Shaolin Wudang Kungfu on the Wudang Mountain like Zhang San Feng and his succeeding disciples did. Chen Wang Ting was the first to give the name “Taijiquan” to the art. The focus of Chen Style Taijiquan was on combat efficiency, not on spiritual cultivation.

Later Yang Lu Chan moved from the Chen Village in Henan to Bejing (or Peking) where he taught Taijiquan to the public. Many of the fighting secrets of Taijiquan would not be taught openly. 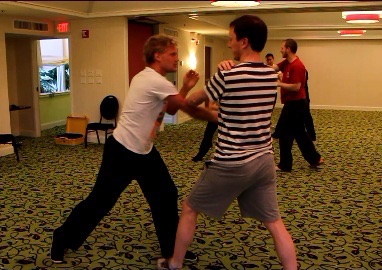 The questions and answers are reproduced from the thread Legacy of Zhang San Feng: 10 Questions to the Grandmaster in the Shaolin Wahnam Discussion Forum.