Would you believe that a master could use just one technique to counter all attacks? 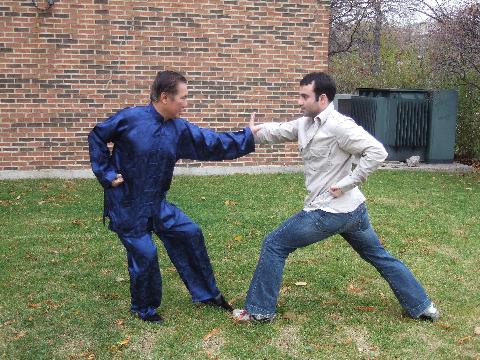 A common scenario amongst kungfu movies is that the hero's teacher is defeated by a bad guy using a technique he has perfected. This technique is so effective that it is known as a “chute chew” (Cantonese pronunciation) or “ultimate technique” , that is, whenever the exponent uses his “ultimate technique” he would defeat his opponents.

In the movies, the hero escapes and travels all over the country in search of another master who could teach him a counter for the “ultimate technique” of the bad guy. Eventually he succeeds and avenges his teacher's defeat.

This gives a mis-conception that techniques are all important, and that a particular technique is needed to counter a particular attack. If one does not know its particular counter, he would be unable to defend against the attack. The primary task in combat, therefore, is to know counter techniques against possible attacks. This, however, is not necessarily true.

In my younger days I often had fun with my kungfu classmates and other kungfu students naming suitable counters to particular attacks. For example, a classmate would call out an attack by name, such as “Black Tiger Steals Heart”, which is a middle thrust punch, and I would respond by calling out its counter technique, such as “Single Tiger Emerges from Cave”, which is a deflecting technique with a tiger-claw.

I would call out another attack pattern, like “Happy Bird Hops up Branch”, which is a side kick, and my classmate would respond by calling out the name of its counter-pattern, like “Lohan Strikes Drum”, which is dodging the kick using appropriate footwork and simultaneously hitting the attacking leg with a downward arm strike. Such “sparring by pattern names” can be both interesting and educational.

Nevertheless, later I discovered that it was “kung” (“gong”) that made a particular technique formidable, and not the technique by itself. More interestingly I discovered that while “Single Tiger Emerges from Cave” was effective against “Black Tiger Steals Heart”, and “Lohan Strikes Drum” effective against “Happy Bird Hops up Branch”, the reverse could also be true, that “Black Tiger Steals Heart” could be an effective counter against “Single Tiger Emerges from Cave”, and that “Happy Bird Hops up Branch” an effective counter against “Lohan Strikes Drum”. There are no absolutes in kungfu. With proper “kung” any technique may be used against any other technique! Further, any technique can be an “ultimate technique”!

“Kung” is a kungfu term that may be roughly translated as “skills”, and include, among other skills, the three fundamental skills of “chun”, “kheng”, “fei”, which are the Cantonese pronunciations meaning “accuracy”, “force” and “speed”.

Let us take an example to illustrate this important combat principle. Suppose a master's formidable technique is “through the heart palm”, which means that the master's palm strike would go through the opponent's heart, thus killing him, or if the master is compassionate, would cause sufficient damage to put the opponent out of combat.

This technique is his “ultimate technique”. It is ultimate in the sense that if he executes this technique in combat, he would defeat his opponent. This “through the heart palm” technique can be executed with different patterns, and a famous pattern for this purpose is “Fierce Dragon Across Stream”.

In order for the technique to be “ultimate” it must have accuracy, force and speed. In other words, the pattern must be spontaneous and picture-perfect. It must have sufficient force to put an opponent out of action with just one strike, and is executed with such speed that the opponent could not defend against it. 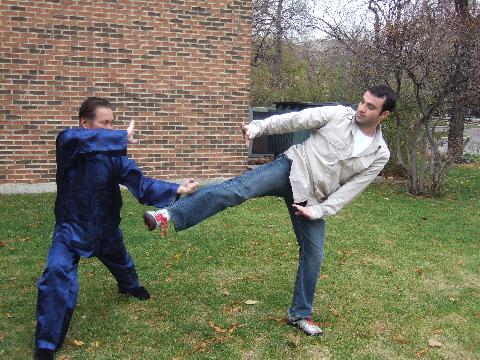 Another person executing the same pattern but lacking in accuracy, force and speed, would not even come close to the master's effect. If you are sloppy in your form, for example, or do not have striking power, or is slow in reaching your target, not only the same technique cannot be effective in defeating your opponent, he may turn the technique around to defeat you.

This reminds us of the great Taijiquan patriarch, Yang Lu Chan. His “ultimate technique” was “Cloud Hands”, which has now been stylized into “Grasping Sparrow's Tail” in Yang Style Taijiquan. It was reputed that Yang Lu Chan used just this one pattern, “Cloud Hands” (or “Grasping Sparrow's Tail”) to defeat all challengers, irrespective of what forms of attacks his opponents used! His “ultimate technique” earned Yang Lu Chan the honorable nickname “Yang the Invincible”.

I shall use just one technique from Shaolin Kungfu, called “chuin sau” or “thread hand”, to illustrate that it can be used to counter any attacks. The pattern chosen to implement this technique is “Traveling Dragon Plays with Water”.

Attacks can come in countless ways but all of them can be generalized into four categories, namely striking, kicking, felling and gripping. A representative attack is chosen from each category to illustrate how just one technique or pattern, “Traveling Dragon Plays with Water”, can be used to counter all forms of attacks.

The pictures below show an opponent, posed by Sifu Anthony Spinicchia, is about to attack me. The opponent moves in with a “through the heart palm” using the pattern “Fierce Dragon Across Stream”. I move a small step backward into a right False-Leg Stance to avoid the strike, and immediately move forward with my right leg in a side-way Horse-Riding Stance to counter-strike the opponent's throat using the pattern “Traveling Dragon Plays with Water”. 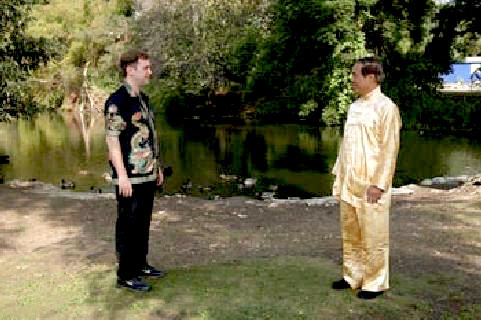 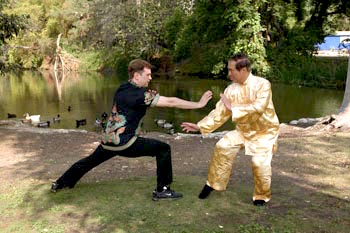 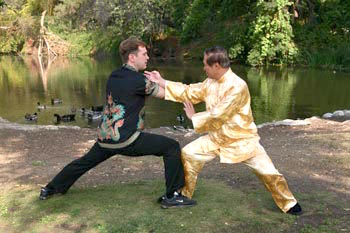 The pictures below illustrate how the same pattern “Traveling Dragon Plays with Water” can be used to counter kicks. Sifu Anthony Spinicchia moves in with a side kick, using the pattern “Happy Bird Hops up Branch”. I move back a step to avoid the full impact of his attack, and as his kick is fully extended I move my body forward to counter strike a vital pointy at his ribs using “Traveling Dragon Plays with Water”. 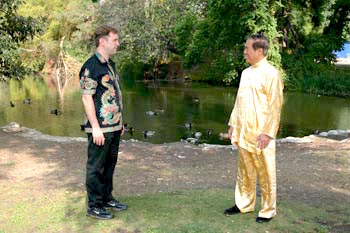 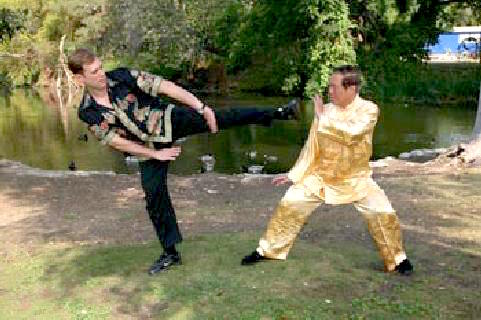 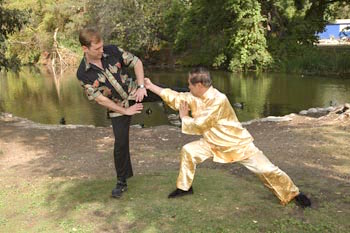 The same pattern can be used to counter throws too. An opponent is about to throw me backward, using a Shaolin pattern called “Fell Tree with Roots”. I move a small step backward to neutralize his leverage advantage, thus frustrating his felling attack, and simultaneously I circulate my hands over his, releasing his hold on me as well as preventing him from striking me. I continue my hand movement and strike the side of his neck, while adjusting my feet for the best stance position. 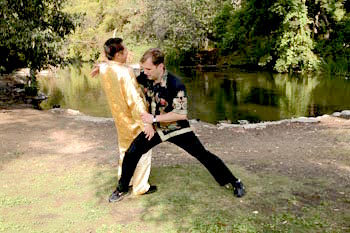 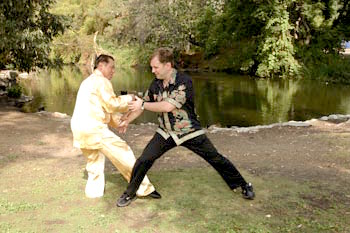 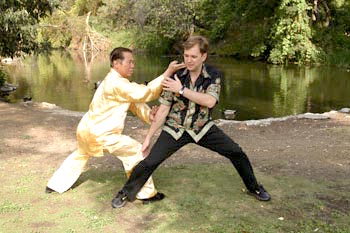 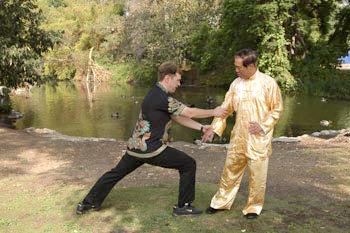 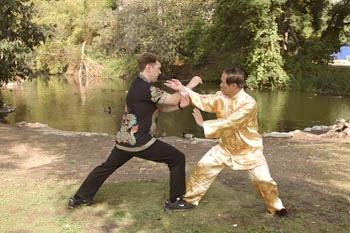 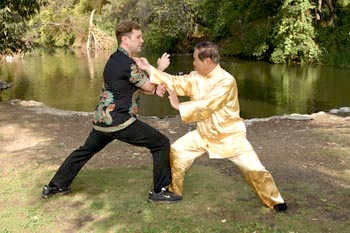 If I practice this technique, “Traveling Dragon Plays with Water” to a very high level of skills, it will become my “ultimate technique”. Not only I can use it to counter any attacks, but also whenever I apply it I will defeat my opponents. Actually my opponents are defeated not because of my technique but because of the very high level skills I use in my technique. In other words, they may know the counters to my attacks when I apply my “ultimate technique”, but in spite of that they are still defeated because I apply the technique so skillfully.

If he starts to specialize too early, he lacks the fundamental skills as well as the deep knowledge of techniques that are necessary to enable him to use just one technique to counter all attacks or to defeat opponents despite their using different counters against his one attack.