WHY WAS I NOT A GOOD FIGHTER? 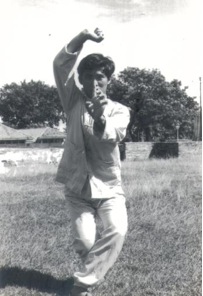 Kungfu form is beautiful to watch. This beautiful pattern from the Tiger-Crane Set is called Sun Moon Shadow Hand. I knew of its sophisticated combat application only much later.

There is no doubt that my late master himself was a great and much respected kungfu fighter. There is also no doubt that he taught me the best he could. Why, then, was I not a good fighter? The reason is because of the norms of the time – because of the way kungfu was (and still is) normally taught, because society at my time was comparatively peaceful, and because of the concepts people generally assigned to kungfu at that time. No kungfu schools I knew of at that time taught controlled or free sparring. Arranged sparring sequences were meant more for demonstration, rather than as a means to learning how to fight. The following two examples illustrate this fact clearly.

In one particular sparring sequence, I was to kick at the groin of a partner. But I was specifically told by my senior who instructed me, to kick far off the intended target, and in a manner easy for my partner to block. In another sequence, the exponent holding a sabre in a slashing attack was told to hold it in such a manner, as well as to stop the momentum in time, so that it would not injure his partner even if the latter had not bother to defend! The exponent would be warned never to execute the sabre slashing technique in the way it should be executed in a real fight, as this could accidentally hurt the sparring partner. Obviously, the advice or warning was well intended. But what was not realised is that not only fighting skills (which are more decisive than techniques in real fights) were not trained, but insidiously more harmful, the students were unwittingly groomed to be complacent.

My master lived at the end of an era when the fist more often than the law ruled the day, while I live at the beginning of a more law-abiding period when fighting (though more cruel and cold-blooded if it ever happens) is less common. Hence, the chances of actually testing one’s kungfu in fights are infrequent. Maybe the unpleasant memory of rough kungfu fighters of older days still lingered on, so that at one time it was fashionable for many people to stress that they learned kungfu for health, and not just for fighting. But in time, this modest declaration, initially made to prevent the abuse of kungfu for petty quarrels, became overstressed and backfired, so much so that the combative function of kungfu was almost missing.

At one time, if you were so bold or naive to suggest that you wanted to learn kungfu for fighting (which actually has been the primary aim of kungfu for all ages), decorum of society would consider you an outcast. Then, when Karate and later Taekwondo came with their open, unbashful conviction that their martial arts were for fighting, many kungfu exponents were rudely awakened to the fact that they were no match for the Karate and Taekwondo exponents. 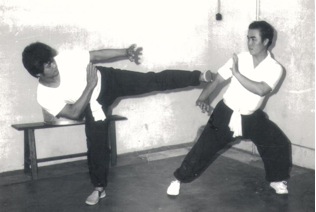 Kungfu is for fighting. Wong Weng Tuck, my early kungfu student, avoided a powerful kick from Ah Bah, another early student of mine.