MY FIRST TASTE OF INTERNAL FORCE 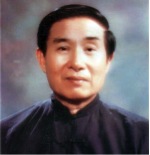 Sifu Chee Kim Thong, regarded as a living treasure of the People's Republic of China

It was in my Wuzuquan training in Sifu Chee Kim Thong's school that I had my first experience of internal force -- at the receiving end. During Kneading Hands training, I was easily thrown about by my seniors, despite me having good stances acquired in my earlier Southern Shaolin training with Uncle Righteousness. On the other hand, I could hardly move my seniors.

I remember a few occasions when my siheng, Sifu Chee Boon Leong, placed his arms over mine during Kneading Hands, I could not move my arms or myself away. His arms just followed mine. Neither could I move his arms away.

It was in knocking arms that the internal force overwhelmed me. I thought my arms were quite tough. In my earlier Southern Shaolin training in Penang, I hit a wooden man every night to toughen my arms. Then, I applied medicated vinegar on my arms to strengthen the bones. Although I was not known to have tough arms amongst my Southern Shaolin classmates, my arms were quite tough compared to other people's.

So, one night, I decided not to give up when knocking arms. I cannot remember which of my classmates I knocked arms with that night, but I could remember he was not muscular or big-sized. We went knocking arms on and on. My partner just swung his arms leisurely, without using any strength. I was stubborn. Despite much pain, I refused to give up, not that I wanted to win in the arm-knocking contest but I wanted to prove to myself that my arms were not soft. Finally, my siheng, Sifu Chee Boon Leong, intervened and asked us to stop.

The next day my arms were swollen and in pain, but my partner’s arms were fine. Sifu Chee Boon Leong applied medicated powder on my arms and bandaged them up. I had to change the medicated powder regularly, and had my arms bandaged for a week. In my school teaching during the day, I wore shirts with long sleeves to cover up the bandage.

This experience taught me two valuable lessons -- that sheer endurance would not strengthen my arms, and that my arms, though stronger than many people’s arms, could not match a person with internal force.

I also remember a conversation with a classmate about internal force while chatting outside normal training.

"Our school is famous for internal force," he said.

"Have you developed much internal force?" I asked in earnest.

He showed me a pattern called Mirror Hand. I could clearly hear a "verf" sound as his palm swept across the air in front, creating what was called "palm-wind" (掌风) in Chinese, and I could see internal force vibrating in his palm.

"I practised Shaolin Tantui (少林谭腿) for many years but there was nothing like this," he said.

"But I am still not satisfied with the result. I want to make it soft," he continued.

"Yes, soft. My force at present is too hard."

I could only listen. 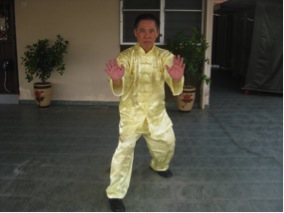