A STORY THAT HAS CHANGED MY LIFE AND COUNTLESS PEOPLE'S LIVES

"I know of a Taekwondo master," Chang said. "His name is Yong, and he also came from Malacca. He is a former Mr Malacca a few years ago. Now he's very keen on Taekwondo."

"How good is he at Taekwondo?" I asked.

I always wanted to find out the background of my opponents before sparring with them. Although I had not heard of Sun Tzu then, without realising it, I employed his advice, "Know yourself and know your enemy, and you will win a hundred battles out of a hundred." If possible, I would like to observe how my opponents spar, and I would prepare myself accordingly.

"He is one of the best in the country," Chang answered. "The Korean masters who came here to spread their art had appointed him to take over when they leave."

"That's a formidable opponent," I thought to myself. "I must do a lot of homework."

"But, to everybody's surprise, he wants to give up Taekwondo," Chang continued.

"Yes, everyone is surprised. He'd be missing a golden opportunity. If he remains in Taekwondo, he will likely become the top man in Taekwondo when the Korean masters have left."

"Why does he want to give up Taekwondo?" I asked.

"He says Taekwondo is injurious to health. He says he knows Taekwondo masters who have to dip their hands in warm water when it starts to rain or else they will feel excruciating pain."

"I didn’t know about dipping their hands in warm water, but I’ve met many Taekwondo masters with deformed hands."

"They deformed their hands while conditioning them by striking a wakiwara."

"They wrap a rope round a pole or a pad, and strike their hands against it," Chang explained.

"And they don't apply any medicated wine to heal their injuries," I added.

"But that's not the real reason why Yong wants to give up Taekwondo," Chang said. "It's a secret. He hasn't told anybody else. But I'll tell you."

I became excited. "What’s it?"

"Yong injured his leg while doing some Taekwondo kicks. Usually they just leave the injuries unattended to. But this time, his injury is so bad that it affects his work. Yong is an engineer. He has to move about, and now he can't."

"It is unwise to leave injuries unattended to. In kungfu, we always apply medicated wine to heal the injuries," I added.

"He went to Sifu Ho Fatt Nam for treatment."

The mention of Sifu Ho Fatt Nam made me more interested.

"During treatment, which took a few days, Yong observed Sifu Ho Fatt Nam's students practising Shaolin Kungfu. Yong was interested. He thought it would be nice to learn some kungfu techniques which he could use in his Taekwondo sparring."

"Yong was very surprised. He beat his Taekwondo sparring partners easily. And he has just practised Shaolin Kungfu for two or three weeks!"

Defending against Taekwondo kicks was a big problem for me at that time when I had free sparring with other martial artists. Shaolin Wahnam students who have often heard me say that countering kicks is easy may be very surprised. Now, it is easy for me to counter kicks, after learning from Sifu Ho Fatt Nam.

"I asked Yong," Chang continued, "Is Shaolin Kungfu so effective? Yong told me a secret. It is a secret. He says he is now confident in beating any Taekwondo exponents in Malaysia, except the Korean masters. Then, as an after-thought, he says, even the Korean masters, I may beat them."

This story is very important for our school, Shaolin Wahnam. It has changed my life, and countless people’s lives.

I thought to myself, "I must learn from Sifu Ho Fatt Nam. I'll rather be a fool for one day, or even one year, but I don't want to be a fool for life." 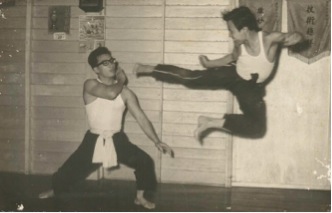