When I was posted to Kedah as a school teacher, thus enabling me to return to Penang every weekend, I wanted to continue my tit-ta studies. Sifu Choe Hoong Choy (曹雄才) was a well-known tit-ta master in Penang. He was also the Patriarch of Choe Family Wing Choon Kungfu (曹家詠春拳). The best part was that he was a personal friend of my father, which made it easier to have an opportunity to learn from him.

Choe Family Wing Choon was a secretive art, and not normally taught to people without special recommendation. “Tit-ta” was exclusive and was normally taught in a one-to-one master-disciple relationship. My father, Wong York Sang (黄育生), introduced me to Sifu Choe Hoong Choy, and explained my intension. I was quite surprised that Sifu Choe Hoong Choy accepted me promptly and readily.

“I’ve heard praises about your kungfu attainment from many people,” Sifu Choe Hoong Choy said to me. “Tit-ta will further enhance your kungfu achievements.”

“I’m very happy that sifu accepts me as your student. I’ll do my best to justify your teaching,” I said.

“You don’t have to call me sifu, calling me Choy Kor will do,” Sifu Choe Hoong Choy said smilingly in his typical modest manner.

“Choy Kor” (才哥), which is in Cantonese pronunciation, means Elder Brother Choy. “Kor” is an affectionate term. It means the person addressed to, accepts you as his younger brother. I felt much flattered that even on our first meeting this great sifu was so kind and generous to accord me this privilege.

“Sifu” is also an affectionate term. It means the person addressed to, accepts you like a son. It is therefore an honour when a great master answers you when you address him as “sifu”.

My relationship with Sifu Choe Hoong Choy was interesting. I always regard him as my sifu, though I followed his instruction to call him “Choy Kor” instead of “sifu”, but he regarded me as his equal. In fact, once during a class at Poon Yu Association where he taught Wing Choon Kungfu, in a rare occurrence in kungfu history, he told his students that he and I were of the same hierarchy in kungfu. This gave me some special privileges that even his close disciples did not have. I could, for example, choose what to learn and he “showed” it to me in a few days, instead of many months students would normally take to learn from a master.

My learning of “tit-ta” or traumatology from him was also special. Although it was a traditional master-apprentice relationship, learning from him on a one-to-one basic from direct experience, much of his teaching, in order to save time, was also from notes systematically prepared by him, structured like in a university education. Hence, I had the benefits of both worlds – the classical and the modern.

Sifu Choe Hoong Choe encouraged me to practise the “tit-ta” I learned. So, I prepared and carried about, when needed, a large male version handbag, containing necessary tit-ta apparatus and medicine like a burner, some wine, bandages and various types of Chinese herbal medicine in powdered form.

Sometimes, to look more professional, I even had a student carry the tit-ta handbag for me. In a grand Karate show held at the impressive Han Chiang High School Hall in Penang, for example, where I was invited as a tit-ta consultant in case of any injuries sustained in demonstrations, my senior student, Goh Kok Hin (吴国兴), attended the function with me carrying my tit-ta bag. 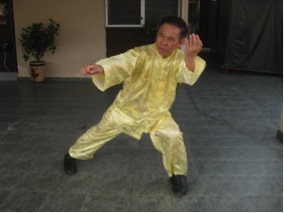