CHUN NGA COULD BREAK A BRICK AT THE AGE OF ELEVAN 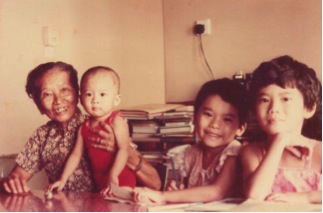 My mother with Chun Nga, Wei Foong and Sau Foong

While I was teaching as a school teacher in Alor Setar, my wife and second daughter stayed with me. My eldest daughter stayed with my parents in Penang, which was only about 125 kilometres away and which I considered my hometown, where we returned every weekend. As a teacher’s salary was poor, I could afford to buy a used car only after working for about ten years, which both my daughters obviously enjoyed travelling in, often counting other vehicles as they passed us by. Before this, we travelled by public buses.

More important than a car was the arrival of my son, Wong Chun Nga (黄俊雅), who was born in 1979. The name “Chun Nga”, also suggested by my wife, means “Handsome and Elegant”, which describes him very well.

Chun Nga was eager to come out to see the world. My wife bore him for only seven months, instead of the usual nine months. So he was very tiny when he was born. According to Chinese belief, a seven-month child, poetically described as a seven-star child, is supposed to be very intelligent.

Despite being tiny when he was a baby, Chun Nga had a lot of internal force. He learned it the hard way, not directly from me but from my senior students even before our present worldwide Shaolin Wahnam Institute was established. After I had resigned from Shaolin Wahnam Association which I had founded earlier, the story of which will be described later, some senior students came to my house to continue their Shaolin training.

My wife told me that Chun Nga would wait at the gate of our house, and when Goh Kok Hin, who owned a small sundry shop which has now grown into a mini supermarket in Kota Kuala Muda, a small town about 25 kilometres from Sungai Petani, arrived he would give a packet of sweets to Chun Nga.

Chun Nga did not just enjoy eating the sweets; he observed our training. Later, he was helped by Cheng Cheong Shou, another senior student, who was a chi kung instructor helping me to spread the benefits of chi kung to the public. At the age of eleven, Chun Nga could break a brick. It was a remarkable demonstration of internal force as a child of eleven could not have the physical strength to break one.

Chun Nga’s internal force opened some psychic centres in his head. He could see through a person’s body. I was quite surprised when one evening he told me he saw two bones inside the forearm of a chi kung student who came to me for some consultation. I did not expect an eleven-year-old child to know of the radius and the ulna of the forearm. Most children would think there was only one forearm bone.

On another occasion when Wong Yin Tat, another senior student who had Iron Shirt, consulted me for some internal injury sustained when he tensed as I struck him on one shoulder to let chi pass to the other shoulder, Chun Nga could see a black mass of blocked chi in his chest. When I channelled chi to heal Yin Tat, Chun Nga could see golden chi transmitted from my sword-fingers disperse the black mass of blocked chi.

I had an experience of Chun Nga’s internal force much later. During an Intensive Shaolin Kungfu Course in Sungai Petani, I demonstrated a felling technique to the course participants on Chun Nga, but was surprised that he was stable and solid. I could fell any able-bodied adult quite effortlessly, but in this case, though eventually I fell Chun Nga, I had to use some special techniques.

Many of our senior instructors in Shaolin Wahnam Institute today were first trained by Chun Nga. When they attended my Intensive Shaolin Kungfu Course, I asked Chun Nga to familiarise them with basic Shaolin stances. I did not know Chun Nga was hard on them until a few told me, not complaining but commenting that the course was indeed tough, that Chun Nga had them in their Horse-Riding Stance for an hour! No wonder they have very good internal force now. 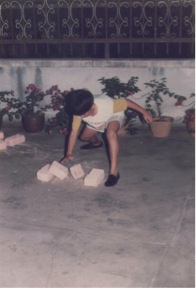 Chun Nga breaking a brick when he was only eleven