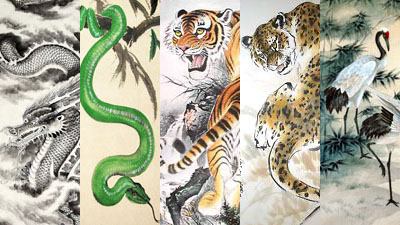 These research papers were originally in German, and translated by the author, Sifu Leonard Lackinger, himself. You can view his overview here.

The animal forms of Shaolin Kung Fu, consisting of the dragon, the snake, the tiger, the leopard and the crane, are a very well-known concept. The imposing imitations of animal movements are an eye-catcher at every show. But what is it actually about?

Practitioners do not want to become an animal by exercising their Kung Fu. As long as it is about classic Kung Fu and not about modern Wushu, it is also not the goal to imitate the respective animals as precisely as possible. So, one does not attack the opponent on all fours or by snaking on the ground towards him.

While the usual way of viewing -- as so often -- is limited to superficial things, it is rather about expressing certain qualities of the various animals in Kung Fu techniques. Many patterns (techniques) can also be attributed to one of the animal styles on the outside, but actually, it is less about the appearance than about inner, partly invisible characteristics.

When our grandmaster, Wong Kiew Kit, read a classic about the five animals in his early years, he was still surprised that the depictions of the individual animal forms hardly differed. Only years later did he realize that the internal components made the difference.

Hei Sai or Spirit of Energy in Shaolin Kungfu from Wong Kiew Kit on Vimeo.

In the "72 Shaolin Arts" practiced in Shaolin Wahnam, this manifestation is cited as "Hei Sai" (Energy Spirit). The outward movements are thus to be inspired by the "spirit", the temperament, or rather the essence of the respective animal.

Therefore, the five animals have mainly symbolic character. You can find out more about their importance and their influence on the development of Kung Fu in the following articles.