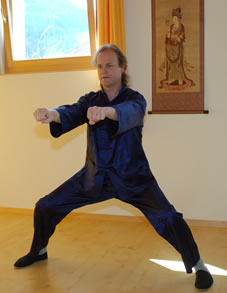 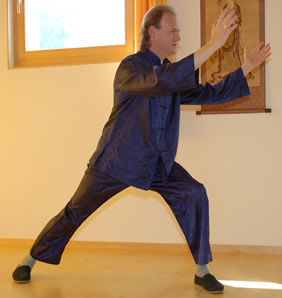 According to the Oxford English Dictionary, a stance is "the way in which someone stands, especially when deliberately adopted (as in cricket, golf, and other sports); a person's posture."

The primary stances are Horse Riding Stance, Bow-Arrow Stance, False Leg Stance, Single Leg Stance, Unicorn Stance, Goat Riding Stance and Four-Six Stance. These are considered primary stances as they are the most commonly used. The inclusion of the Four-Six Stance in this primary group is because of its extensive use in the Shaolin Kung Fu derivatives of Wing Choon Kung Fu and Taijiquan.

The secondary stances are numerous. Some examples are Seven Star Stance, Cat Stance, T-Step Stance, Stream Character Stance and Slanting Body Stance. As noted, these are just some of many secondary stances.

Why and when were stances developed?

It is unclear when the development of stances began. However, all classics of Kung Fu display clear use of stances.

When man (meaning the species rather than gender) started to fight, he did so randomly -- much like children in the playground. The winner (whether human or animal) was almost always the physically stronger of the opponents. Through trial and error, he discovered that certain positions were more advantageous than others in combat. By remaining in a static posture rather than bouncing around, for example, he could observe his opponent(s) more effectively whilst preserving his limited energy resources. By remaining in this posture, he was always ready to strike effectively and just at the right time.

Having said that, the static posture was soon found to be disadvantageous if it was too rigid. So began the experimentation that finally led to the stances we know today, which contain a perfect balance between stability and flexibility, solidity and agility, rooting and flowing. This balance, however, is neglected in many schools and styles of Kung Fu and indeed other martial arts. Some have even gone so far as to discard stances completely. This is surely caused by a lack of understanding. 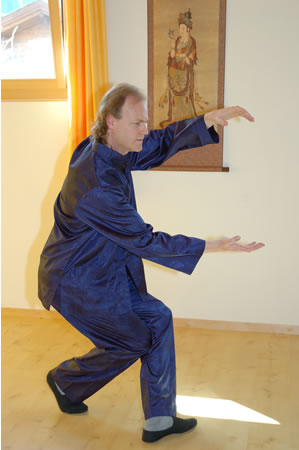 As we know from Kung Fu classics, the stances were (and are) referred to as "the Foundation of Kung Fu". Many have probably heard this statement, yet few have taken the trouble to understand it. Kung Fu is a structured system of movements for cultivating at various levels. These levels combine to form a comprehensive system for personal development physically, mentally, emotionally and, in the high-level arts, spiritually. Different styles (and schools) of Kung Fu have placed more (or less) emphasis on these four aspects.

As noted, great Kung Fu requires a structure. As with all stable structures, the stability starts at the point of connection to the surrounds. In the case of Kung Fu, this connection is usually to the ground. Using a building as analogy, the building can only be stable if the foundation is stable. A building can be built as well as anyone can conceive using the greatest materials but, without a great foundation, even that building will fall apart if faced with the forces of nature. Such is also the nature of Kung Fu. The stances build this physical foundation on which all patterns and application are based.

The physical foundation, however, is only one part of the stances as the foundation of Kung Fu. Kung Fu foundations (stances) extend to the energetic, mind and spiritual levels too.

The benefits of stances extend beyond the limitations of the physical foundation, as noted above. For convenience, the benefits can be categorised as follow:

At the physical level, the solid base for all Kung Fu patterns and techniques is created. In addition, by training stances, strong leg muscles and physical stability can be achieved. However, if only trained at the physical level, and without adequate complementary training such as stretching and speed training, the body can become slow and inflexible. The larger muscles become, the more effort is required to move them.

In terms of combat, experience has shown that the stable, flexible, solid but flowing stances make a major contribution to overall combat efficiency. Note, though, that stability alone is not enough to achieve this. Without the other components of flow, fluidity, agility, balance and flexibility, the stances can indeed become disadvantageous. Incorrect stance training (as implied above) would lead to this result. This is possibly the main reason that many systems have discarded stances when not practicing their demonstrative forms. 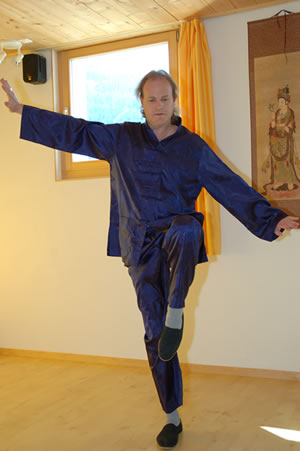 A human comprises three main "components" -- Jing, Chi and Shen. Jing, in this respect, can be considered the physical body; Chi the vital energy; Shen the mind. Correctly performed stances enhance the flow of energy in the body. When performed in a static, relaxed manner, they lead to increase in internal force. Internal force, not to be confused with physical, or muscular, strength, can be considered as the total amount of energy flowing and "stored" in the body. This internal force not only leads to an increase in vitality, health and power or strength, it enhances performance in all other activities.

Correctly trained stances also enhance our mental and spiritual aspects. By increasing the internal force and volume of energy flowing, energetic blockages are removed at all levels. Thus, emotional and mental balance and strength are achieved. The mind is calmed, stress levels dramatically reduced and mental freshness and clarity achieved. At the highest levels of stance practice, the mind (or spirit) can, and does, expand beyond the physical, phenomenal dimension allowing spiritual joys and the cosmic dimension, all that is more than just the physical, to be experienced.

Just considering these benefits, it is not surprising that the stances continue to be a key, foundational element in Shaolin Wahnam and all other schools of genuine, high-level Kung Fu.

The original article can be found here