Horse racing was a popular sport during the Period of Warring States (475-221 BCE). Competitors would match three races. The one who won two of the three races would win. The result would be two-zero or two-one. Tian Ji, the general of Qi, usually lost.

“Why are you so miserable, my General?” Sun Bin asked Tian Ji.

“I lost heavily in a horse-race.”

Sun Bin asked Tian Ji to tell him more about the horse race. The horse owners classified their horses into three classes. Class 1 horses were the fastest, followed by Class 2 and then Class 3. It was a usual practice to match Class 1 horses in the first race, Class 2 horses in the second race, and Class 3 horses, if there was a draw, in the third race.

“Arrange for another horse race. Bet heavily on it. I shall teach you a strategy that you will win,” Sun Bin told Tain Ji.

So in the next horse race, Tian Ji bet heavily on his horses. Sun Bin advised Tain Ji, “Match your Class 2 horse against your opponent’s Class 1 horse.”

“I shall be sure to lose the race,” Tian Ji demonstrated.

“That is a sacrifice,” Sun Bin explained, “but you will win the subsequent two races, making you the overall winner.”

“How are you sure that I shall win the other two races.”

Tian Ji did as he was advised, and won handsomely.

Bitten off by a Mouse

During the Period of Three Kingdoms (220-280 CE) a quartermaster looking after the store of Cao Cao, the Lord of Wei, found that Cao Cao’s horse-saddle was bitten off by a mouse. At that time there was a belief that if a mouse bit off something, the owner would have bad luck. So the quartermaster was scared. He knew that he would be executed by Cao Cao.

Cao Cao’s son, Cao Chong, discovered this incident. He pitied the quartermaster, consoled him, and told him a strategy that would save his life.

“I’m going to see my father,” Cao Chong said. “You should follow soon after and tell my father the truth. I guarantee you that you won’t be punished.”

Cao Chong tore off a piece of his clothing, as if it had been bitten off by a mouse. He pretended to be very sad.

When Cao Cao saw his son, he said, “Son, why are you looking so sad?”

“Father,” Cao Chong said, “a mouse bit off a piece of my clothing.” He showed the torn clothing to his father. “According to a belief, if a mouse bit off something, the owner would have bad luck. That’s why I am sad.”

Cao Cao laughed out loudly. “Don’t listen to such non-sense. It is not true.”

Just then the quartermaster entered and told Cao Cao about a mouse bitten off his horse-saddle. Cao Cao laughed more loudly.

“It’s pure non-sense,” Cao Cao said. “A mouse bit off the clothing of my son. What is the horse-saddle compared to my son. I don’t believe in such non-sense.”

One Thousand and One Nights

The frame-story of the famous collection of stories, “One Thousand and One Nights”, sometimes called the “Arabian Nights”, is based on the strategy of “Plum for Peach Sacrifices”. Scheherazade, the story teller, sacrificed herself for millions of women.

The frame-story is as follows. Shahrayat, King of a Muslim empire, probably in India, discovered that his queen was unfaithful to him. He executed her and her maids, thinking that all women were deceitful. He wanted to take revenge.

He had a wife every night but killed her the next morning until no woman in the whole empire wanted to marry him. He sent his Prime Minister to get him a wife but no woman dared to marry the King.

The Prime Minister became very sad and thought he would be executed by the King due to his failure. After finding out the reason, his daughter, Scheherazade, decided to marry the King. Of course the Prime Minister would not consent to it, but Scheherazade said she had a plan which would not only make the King not execute her but change his behavior.

On the wedding night, Scheherazade told the King a story, but stopped the narrative at its most exciting point. The King postponed executing her so that she could continue the story.

The next night Scheherazade continued the story she stopped the previous night. When the present story ended she started another exciting story, but stop her narrative at its most breath-taking point. She continued in this manner every night for one thousand and one night. Eventually the King changed his behavior and really made her his queen.

The collection of stories told by Scheherazade is called the “One Thousand and One Nights”. The stories are interesting and come from many sources, but mainly Arabian, Persian and Indian. Some of the famous ones are Alauddin and his Wonderful Lamp, Ali Baba and Forty thieves, and Sinbad the Sailor.

A crucial reason, which many people may not know, how the Allies won the Second World War (1939-1945) was because the Allies could successfully decipher secret codes of German military messages.

Winton Churchill, for example, knew that the Germans would bomb an important industrial town in the United Kingdom and he had sufficient time to prevent it. But if he did so, it would be an admission to Nazi Germany that the Allies could decode its secret messages, thus causing the Germans to change their codes. 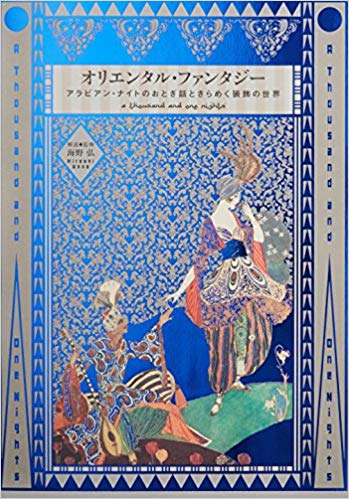 One Thousand and One Nights, picture taken from https://www.amazon.com/Thousand-One-Nights-Folklore-Literature/dp/4756248160