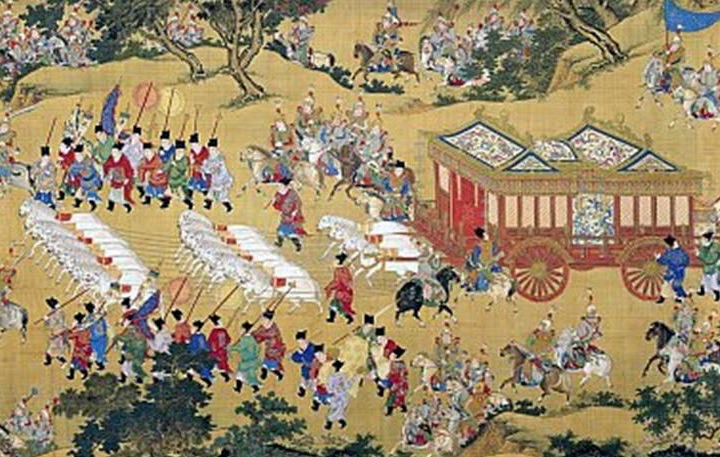 You wish to get something valuable, but you don’t have any clues. So you say or do something to test the situation. This prelude leads to information or circumstances that can bring out what you ultimately want.

During the Period of the Warring States (475-221 BCE), the State of Zhao and the State of Qin formed an alliance to attack the State of Wei. The Qin King offered the Zhao King the Wei City of Ye as a reward if they won the war.

The King of Wei was worried. He summoned his ministers and generals to discuss what to do.

Wang Mao, a Wei general, said, “All along Zhao and Qin were not in good terms. Now the main purpose of them forming an alliance is to attack us, and if they win, the Qin King would offer the Zhao King our City of Ye. In the past we and the State of Zhao were friendly. I have a plan which will avoid their attack and bring us benefit.” Wang Mao then whispered the plan to the Wei King, who was very happy.

The Wei King sent his minister, Zhang Yi, as an emissary to see the Zhao King.

Zhang Yi said to the Zhao King, “We know we shall not be able to defend the combined attack of your State and the State of Qin. We also know you attack us because of the City of Ye. We have been friends all along. But you and Qin were not friends. The Qin army is known to be barbaric. So after much deliberation my King has decided to hand the City of Ye to you, our friends, instead of letting it fall to the barbarians.”

The Zhao King was happy, but he managed to hide his happiness. He asked Zhang Yi, “But we haven’t started war yet. Why does your King want to hand the City of Ye to us so soon?”

“In any war,” Zhang Yi replied, “the people suffer and the place is destroyed, regardless of who wins. My King is a humanitarian. He does not want his subjects to suffer.”

“What do you want of me in return for the City of Ye?” the Zhao King asked.

“We just want you to severe your alliance with Qin.”

“I shall think over your proposal. Come back tomorrow and I shall give you my answer.”

The Zhao King consulted his ministers. One minister said, “Our purpose of forming an alliance with Qin to attack Wei is to occupy the City of Ye. Now the city is offered to us without fighting. It is an offer we shouldn’t miss.”

Another minister said, “Qin is a powerful state. Even when we win the war against Wei, the Qin King may retract his words and refuse to give us the City of Ye.”

So the Zhao King severed ties with Qin, and sent a small troop to take over the City of Ye.

The Commander of the City of Ye was Wang Mao himself. When the Zhao general told Wang Mao about his intention of taking over the city, Wang Mao became angry.

“I was sent by the King of Wei to defend this city,” Wang Mao said. “The King never gave me any instruction to hand the city to you.”

“But your emissary, Zhang Yi, said that the State of Wei would give the City of Ye to us.”

“In this case, you better ask Zhang Yi for the city. As for me, you better leave quickly before I attack you.”

As the visiting troops were small, the Zhao general knew his troops would not match Wang Mao’s army. So he left to report to the Zhao King. The Zhao King realized he was tricked, but it was too late.

Meanwhile, the Qin King was furious that the Zhao King severed the alliance. So he prepared an army to attack Zhao.

Emperor Tang Tai Zong of the Tang Dynasty (618-906) was an ardent admirer of Wang Xi Zhi (303-361), regarded as the Sage of Calligraphy, who lived in the earlier Jin Dynasty. The Emperor had a rich collection of Wang Xi Zhi’s own writing except the famous calligrapher’s masterpiece, “Orchid Pavilon”.

Xiao Yi, the imperial historian, reported to the Emperor that “Orchid Pavilon” was originally a treasure in the Wang’s family but now it had been passed down to Venerable Ban Cai, the abbot of the Yong Huan Temple in Henan Province. The Emperor commented that it would be wonderful if he could have possession of this masterpiece.

Xian Yi said he could acquire it for the Emperor.

“Use whatever means you can, but don’t use force,” the kindly Emperor reminded Xiao Yi.

Xiao Yi borrowed two treasured pieces of Wang Xi Zhi’s writing from the Emperor, and paid a personal visit to the abbot at the Yong Huan Temple (or Forever Happy Temple).

Knowing that he was an imperial historian, the abbot welcomed him warmly and soon they became good friends. As both of them were steep in culture, they spent many days together discussing or engaging in cultural arts, like playing the Chinese piano, playing chess, reciting poetry and painting together.

One day a topic of discussion touched on calligraphy and Wang Xi Zhi. Xiao Yi said that he admired Wang Xi Zhi greatly and had two of his treasured writings which he showed the abbot, but he hadn’t seen Wang Xi Zhi’s masterpiece, “Orchid Pavilion”.

The abbot confided that he had “Orchid Pavilion”. The imperial historian feinted surprise, and expressed his earnest wish to have a look. The abbot led him to the temple library, took out an iron box, and showed him the masterpiece.

Xiao Yi was in deep admiration of the master’s writing. Then the imperial historian exhibited doubt on his face. “This masterpiece disappeared from the world for a few hundred years,” he said, “I wonder whether it could be fake.”

“It can’t be fake,” the abbot said, “I inherited it from my own master, and it has remained as a secret treasure in our temple.”

“The master forgot to bring his shawl,” Xiao Yi told the librarian, “he’s asked me to return to get it for him.”

The temple librarian knew that the abbot and Xiao Yi were close friends, so he did not suspect anything amiss.

Xiao Yi took the masterpiece from the iron box and replaced it with a counterfeit. He then hurried back to the Tang Emperor.

A Horse Tail for a Real Fine Horse

“Why are you so sad?” the monk kindly asked.

“Last night a pack of wolves ate my horse. This tail is what is left of it.”

“Don’t be sad. I’ll exchange this horse tail with a real horse from the local rich man,” the monk said.

“The local rich man is noted for being greedy. He won’t exchange a horse tail for a horse with you.”

“Just wait here,” the monk said. “I’ll bring a real horse back for you.”

The travelling monk went to the house of the local rich man, but found him out hunting. So he waited on a route where he knew the rich man would pass on the way home. The monk found a hole at the side of small hill, so he pushed the horse tail in, leaving half a portion sticking out.

Soon the rich man and some followers returned from hunting. The monk pretended to pull the horse tail from the hole.

“My horse has entered this hole, and I’m trying to pull it out.”

The rich man was more curious, He alighted from his horse and came near the monk. “The hole is too small. How could your horse enter a small hole?”

“Mine is a magic horse,” the monk replied. “It can become big and small. It can travel a thousand miles by day, and eight hundred by night. Sometimes it can fly in the air.” The monk spoke with such seriousness that the rich man thought it was true.

Then a feeling of greed arose in the rich man. He wanted to have the magic horse for himself.

“Don’t talk non-sense to me,” he shouted at the monk. “Get out of my sight quickly.”

“But I’ve sprained my ankle trying to pull my horse out. I can’t get out of your sight quickly,” replied the monk.

“Here, take my horse, and get out of my sight quickly.” The rich man handed his horse to the monk.

The monk mounted it and sped off.

He found the old man still waiting patiently for him. The monk threw a horse tail and got a real fine horse. He gave the horse to the old man.

Maotai Made its Debut in World Expo

In 1915 a World Exposition was held in Panama. Many fine products were introduced by various countries. China wanted to introduce Maotai, an exquisite but strong liquor fermented from sorghum, to the world, but not many people were interested in it.

A smart Chinese official had a brilliant idea. He took a bottle of maotai, went to a busy place at the Expo, and as if by accidence, dropped the bottle of maotai on the ground. Fragrance of the exquisite liquor filled the air. Many people spontaneously exclaimed, “Good liquor!”, “Fine liquor!”, “Wonderful liquor!”

Maotai made its debut, and soon was famous throughout the world. 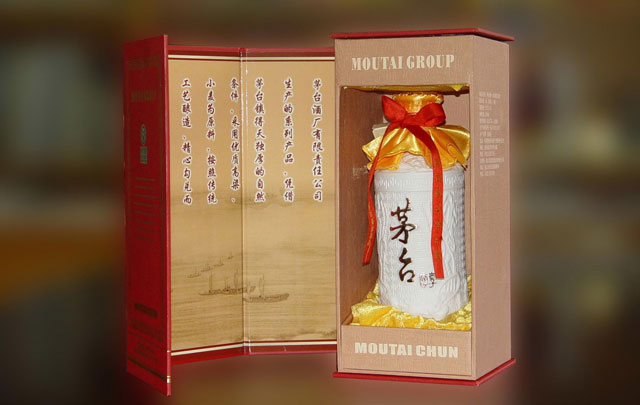