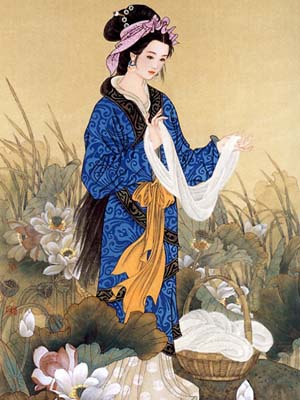 There is a Chinese saying that even heroes may not escape the temptation of beauties. Thus, the “Beautiful Woman Strategy“ has been used often to tempt heroes. Ordinary people have little chance to escape from this strategy.

Towards the end of the Spring-Autumn Period (770-475 BCE), Fu Chai, the King of Wu, captured Gou Jian, the King of Yue. Gou Jian and his wife worked faithfully as servants for Fu Chai for three years, after which Fu Chai released them.

After Gou Jian had returned to his kingdom, he wanted to avenge his humiliation. His minister, Wen Zhong, knowing Fu Chai’s weakness, proposed using the “Beautiful Woman Strategy”.

Another minister, Fan Li, found Xi Shi, one of the four great beauties of China. Fan Li told Xi Shi about their strategy to retrieve the State of Yue. Admiring Fan Li’s loyalty, Xi Shi agreed to the strategy only if Fan Li promised to marry her when the Yue King had succeeded in conquering the State of Wu.

Xi Shi was presented to Fu Chai, the King of Wu. Fu Chai was so bewitched by Xi Shi’s beauty that he neglected his state affairs. He spent days and nights enjoying himself with Xi Shi.

Fu Chai’s advisor, General Wu Zi Su, warned the King about Guo Jiang and Xi Shi, but Fu Chai did not listen. Eventually Fu Chai gave Wu Zi Su his sword and ordered Wu Zi Su to commit suicide. Before he died, Wu Zi Su told the King to take off his (Wu Zi Su’s) eyes and hanged them on the city wall so that Wu Zi Su could see Gou Jian conquering the State of Wu.

True enough, In 473 BCE Guo Jian lead an expedition to attack Wu. Guo Jian sieged the Wu capital for three years before it fell. When an offer by Fu Chai to surrender was rejected by Guo Jian, Fu Chai committed suicide. The State of Wu was annexed by Guo Jian.

Guo Jian was ruthless in killing Fu Chai’s followers. He did not want to make the same mistakes Fu Chai made earlier by sparing his enemies.

Fan Li was abhorred by Guo Jian’s ruthlessness. He knew that Guo Jian would also go after him soon. So he asked Guo Jian’s permission to retire, giving the reason, or excuse, that he had helped Guo Jian to annex Wu.

Another great beauty of China, Diao Chan, was also employed in the “Beautiful Woman Strategy”.

Towards the end of the Eastern Han Dynasty (25-220), Dong Zhuo led his army into Luoyang, deposed the emperor, Han Shao Di, and installed the emperor’s brother, Han Xian Di, as the next emperor. Dong Zhuo moved the capital to Changan and became the Prime Minister. Han Xian Di was a puppet, and the empire was under the control of Dong Zhuo. Many ministers were unhappy with his ruthless control.

A loyal minister, Wang Yun, wanted to overthrow Dong Zhuo. He had a very beautiful maid, Diao Chan, whom Wang Yun treated like his own daughter and who was one of the four great beauties of China. One night, Wang Yun found Diao Chan praying to the Moon Goddess for peace in the empire.

After securing the agreement of Diao Chan, Wang Yun had a plot to use the “Beautiful Woman Strategy”. He invited Lu Bu, who was a great warrior and an adopted son of Dong Zhuo, to his house for a banquet, and Diao Chan served liquor to them.

Lu Bu was enchanted by the beauty of Diao Chan. Wang Yun said, “General, if you do not mind, I shall present my daughter to you as your wife.” Lu Bu was flagabusted and knelt down to thank his father-in-law.

Two days later, Wang Yun invited Dong Zhuo to his house for a banquet, and asked Diao Chan to serve them. Again, Dong Zhuo was surprised to see such a beautiful woman. Grasping the opportunity, Wang Yun said, “Prime Minister, if you don’t mind, you can take Diao Chan back to be your maid.” Dong Zhuo was very happy, and immediately took Diao Chan away.

When Lu Bu heard of the news, he was furious. He sought out Wang Yun to sort out the matter. Wang Yun pretended to cry. “The Prime Minister sent people here to take away Diao Chan,” he sobbed, “and said he would immediately marry her to you.”

Lu Bu rushed to the Prime Minister’s residence to find his adopted father, but found Diao Chan instead. Seeing Lu Bu, Diao Chan began to sob. She leaned on to Lu Bu and murmured into his ears “I’m your wife, but the Prime Minister took me here and molest me. Please save me, my dear husband.” They embraced and whispered words of love.

Dong Zhuo happened to pass by and saw their loving embrace. Dong Zhuo was enraged. Lu Bu quickly ran, with Dong Zhuo hot on his heels. But Dong Zhuo could not catch up. He saw Lu Bu’s crescent-moon spear against a wall. He took the spear and threw it at Lu Bu attempting to kill him. But Lu Bu caught the spear in his hand, and escaped out of the Prime Minister’s residence.

Lu Bu consulted Wang Yun. After listening attentively to the story, Wang Yun exclaimed with indignation, “What a beast Dong Zhuo is. He kidnapped my daughter, stole your wife, and molested her. I am a scholar, not a warrior. But you are a great warrior, a great hero. How can you tolerate such injustice, such immorality!”

Lu Bu sighed, and said, “He is like my father. If I kill him, people will gossip.”

“How can that be!” Wang Yun exclaimed in surprise. “Your surname is Lu, and his surname is Dong. There is no father-son relationship. When he threw the spear at you to kill you, did he ever consider you a son?” Lu Bu was infuriated.

Soon, Dong Zhuo was wounded by some assassins secretly sent by Wang Yun to slay him. Dong Zhuo cried for help, “Lu Bu, Lu Bu, where are you!”

A pretty German female spy used her beauty to acquire a blueprint of the British tank during the First World War (1914-1918). German intelligence received information that this blueprint was kept in the house of a high-ranking French military officer in Paris.

The pretty spy set to work. She met the military officer in a dance party, and soon became her mistress. Knowing that he was alone, she suggested moving into his house. He was of course delighted.

She was her mistress at night and housekeeper during the day time. But her duty was to find the safe keeping the blueprint. One day while tidying the house she found it, with a code of figures outside. She tried for many days opening the safe but to no avail. Then she received intelligence from the Germans that the code could be in six figures.

She tried again and again using six figures but still could not open it. Suddenly she saw an old-fashioned clock hanging on an opposite wall, and the clock had stopped at 9 o’clock 35 minutes and 15 seconds.

She had an inspiration. 9 o’clock was 21 hours. So she tried the code 21 15 15, and it worked. She took photographs of the blueprint and send them to the German intelligence.

Aroma of Fragrance Before Signing Contract

Some people may think the following story fanciful but it is not an uncommon strategy used by some companies in business negotiations.

After a short while the assistant came back with a big envelop. The young executive was surprised at its size, and was about to open it.

“Just keep it in your briefcase,” the general manager said, “You can check it later on.” And he continued to mention some other business matter.

When he returned to his room, he was shocked to find that there was much more money than the amount he gave the general manager for currency exchange.

“The general manager wanted to bribe me,” he said to himself.

The next day he returned the big envelop with a lot of money in it to the general manage. “There is much more money for the currency exchange,” he said. Then he quickly continued, “I’ve come for business negotiation for my company, and I'll do my best for my company.”

“Oh, that’s alright,” the general manager said. Then he clapped his hands, and a beautiful young woman in a business suit but with a fragrant aroma around her came out.

Surprisingly to the young executive, the negotiation went on smoothly, all according to the terms of his company. But the young executive was captivated by the beauty of the private secretary, as well as her fragrant aroma. Once a while he would steal a look at her, and occasionally when she caught his stealing looks she would smile back sweetly.

“I shall write out the contract tonight, and tomorrow morning you and my general manager can sign it,” she said.

As the young executive returned to his hotel room, he was glad that the negotiation went according to plan, and following the terms of his company. But he was thinking of the beautiful private secretary.

The telephone in his hotel room rang. He was extremely delighted that it was from the beautiful private secretary.

“I’m working on the contract now, but I just come across a small problem that I need you to help me. Can you please come to my apartment?” She then gave him directions to go to her apartment.

When he pressed on the door bell of her apartment, he heard a sweet voice asking him to go in. When he entered the apartment, he was dazzled. The beautiful private secretary was sitting at a dressing table gently combing her hair. She was the same beautiful private secretary he saw in a business suit in the day, but her appearance was now very different. She was in a transparent night dress. But the drift of fragrance around her was still the same.

She smiled at him from the mirror. Then she stood up, turned around, walked to him and said, “I managed to finish the contract before you arrived. Please have a look at it.” She handed him the contract.

Although he could hardly control himself, he could still see it was the same contract they had been negotiating.

The young beautiful private secretary returned with two glasses of wine. “Let us drink to our successful negotiation,” she said.

He found the wine fragrant. Then he found himself in a daze.

When he woke up, he could still find the aroma of fragrance around him, but the beautiful private secretary was gone. He found himself in a big bed. To his horror he found himself naked.

The television set in front of the bed was running. To his further horror, he found that the two actors in the television were him and the beautiful private secretary, naked and making love wildly in the same bed he was on.

He reached out to turn the television off, but found a note. It read, “If you don’t want the video to go public, please sign the contract tomorrow.”

When he turned up to sign the contract the next morning, he found it different from the one he saw the previous night. The terms were, of course, favourable to the international corporation. 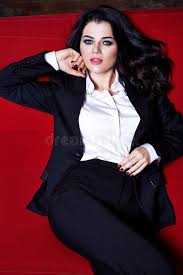 A secretary, picture taken from https://www.shutterstock.com/search/beautiful+secretary