In this strategy you make some initial sacrifice, but achieve your objective eventually. Sometimes the sacrifice can be severe so that other people may not know it as a trick.

This strategy is drastic and not many people would use it. But it shows to what extent Chinese strategists in the past would go to to achieve their purpose.

During the Spring-Autumn Period (770-475 BCE), Ji Guang killed the King of Wu and ascended the throne. The former prince, Qing Ji, escaped and wanted to retake the kingdom. Ji Guang wanted to assassinate Qing Ji.

Looking at Yao Li’s physique, the new Wu King said, “Qing Ji is a great warrior. He could lift up a heavy bronze vessel with one hand, and with the other hand fight a group of formidable warriors. Do you think you can assassinate him?”

Yao Li said, “Assassinating a warrior needs brains, not brawn. You would increase my chance of assassinating Qing Ji if you chop off my right arm at the shoulder and kill my wife.”

The new Wu King was shocked. He found the strategy too drastic. But Yao Li persisted and the King finally gave in.

Rumours were spread that Yao Li opposed the Wu King and was imprisoned. Yao Li tried to escape but was caught. His right arm was chopped off at the shoulder. But he escaped again. The Wu King killed his wife.

Yao Li wandered about and eventually arrived at Qing Ji’s place. Qing Ji took pity on him and made him an advisor. Yao Li helped in drawing plans to retake the throne of Wu.

They set sail to attack Wu. Qing Ji and Yao Li were in the same boat. When Qing Ji was most unexpected, Yao Li pierce through Qing Ji from his back. Qing Ji’s soldiers came forward to kill Yao Li but Qing Ji stopped them.

“He is a true warrior,” Qing Ji said, referring to Yao Li. “No two warriors should die on the same day.” But Yao Li committed suicide after he had killed Qing Ji.

The story of Si Ma Xiang Ru and Zhuo Wen Jun which illustrated the use of this “Self-Torture Strategy” was romantic rather than drastic. Indeed, their romantic stories became legends among Chinese people.

Si Ma Xiang Ru, a great Chinese poet and writer, met Zhuo Wen Jun, a female poet and the daughter of a very rich man, during the reign of Han Wu Ti of the Han Dynasty (206 BCE to 220 CE). They fell in love at first sight, and eloped to the city of Cheng Du.

Si Ma Xiang Ru and Zhuo Wen Jun had no money, but they had to live. At first they asked Zhuo Wen Jun’s rich father to help, but he was furious at their elopement and refused to give any financial aid. Si Ma Xiang Yu had a plan using the “Self-Torture Strategy”.

They sold all their belongings and started a little restaurant and liquor shop. The food and liquor were just mediocre, but a lot of people patronized the shop. They came because they wanted to find out how two great poets survived. Si Ma Xiang Ru and Zhuo Wen Jun, although they were great poets, wore tattered clothing and served their customers like servants.

Soon the news spread to Zhuo Wen Jun’s rich father. He relented, and gave them a lot of land and money, making them one of the richest in the area.

During the Middle Ages (5th to 15th century) in Europe, kings were under the suverignty of the Pope. The Pope would preside over coronation of kings and investiture of bishops. Kings had to kneel before the Pope.

In 1078 it came to a head-on conflict. King Henry IV called a synod of German bishops and renounced the Pope. Pope Gregory VII called a huge conference of all Catholics in Europe to excommunicate King Henry IV, giving him one year to repent, failing which the excommunication would be permanent.

The Pope’s influence was great. In Germany many German princes rebelled against King Henry IV, wanting to replace him unless the excommunication was revoked. King Henry IV was caught in a precarious situation.

He left Speyer in Germany with a royal entourage in a long walk of penitence to Canossa in north Italy where the Pope was. He wore a hair-shirt, the traditional clothing of monks, and walked bare-footed through the winter cold. On 25 January 1077, he reached Canossa castle.

King Henry IV employed the “Self-Torture Strategy” to gain time. When he was back in Germany he consolidated his army. First he quenched the rebellions. Then he attacked the papacy. The Pope fled and later died.

To Fall So to Rise

There was a beautiful firm star in Paris, but she was initially not famous. Her movie company conducted a publicity conference in a luxury hotel to promote her.

When all newspaper and television reporters crowded around her, she suddenly had a bad fall. Her skirt flew up and exposed that interesting part most women would not want others to see. Photographs of her falling, together with that interesting part accidentally exposed, were flashed throughout the world, and she became famous instantly. In fact. her exposed skirt became an icon.

Later her confidant asked her, “Why were you so careless to fall in front of cameramen?” “Careless?” she replied in surprise. “I rehersed the falling carefully.” 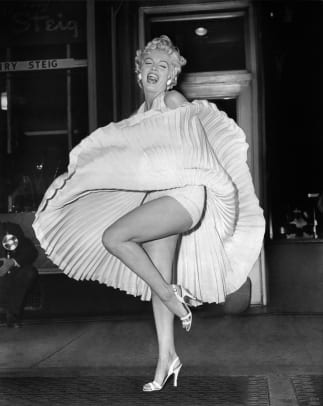 The flying skirt of Marilyn Monroe, picture taken from https://www.biography.com/news/marilyn-monroe-seven-year-itch-dress-photos