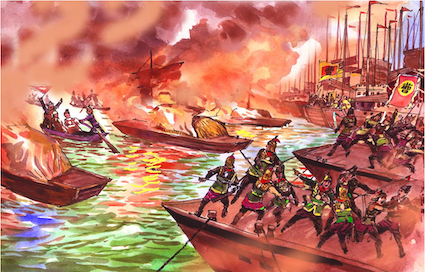 The Battle of Red Cliffs, picture taken from https://thehistoryofchina.wordpress.com/2014/09/28/episode-38-the-red-cliffs-of-chibi/

During the Period of Three Kingdoms (220-280) Cao Cao led a huge navy to attack the State of Wu. Cao Cao’s navy was commanded by two capable generals, Cai Mao and Zhang Yu. Employing the “Double-Cross Strategy”, the Commander-in-Chief of the Wu army, Zhao Yu, made Jiang Gan to get Cao Cao executed these two capable navy commanders.

Jiang Gan felt embarrassed as he left Zhou Yu hurriedly without biding farewell. He wondered aimlessly in the woods. He found a lighted hut. Going closer he was surprised to find a well known strategist, Pang Tong, reading Sun Tzu’s Art of War.

Entering the hut, Jiang Gan introduced himself, and said, “I see you are reading the Art of War,”

“I’m now unemployed,” Pang Tong said. “So I spend my time reading the Art of War to brush up my strategies.”

“It’s no use,” Pang Tong sighed. “No lords want my service.”

“If you want to serve under Cao Cao, I can give you an introduction.”

Cao Cao, who was known to take in talented people, was very happy.

Pang Tong found that many of Cao Cao’s soldiers were sea-sick because of the moving boats. This delayed Cao Cao from attacking the State of Wu with his large fleet.

Pang Tong suggested to Cao Cao, “To overcome sea-sickness, we can link all the ships with iron chain. The whole fleet will move in one unity, like on land. There will not be any more sea-sickness.”

Cao Cao was very pleased with the idea. Immediately he ordered all the ships to be linked by iron chains. Soon no one on board was sea-sick.

Cao Cao then moved his massive fleet towards the State of Wu. When the ships were near enough, Zhao Yu, the Commander-in-Chief of the Wu army, ordered his soldiers to shoot fire arrows at the ships.

As the ships were linked together by iron chains, there was no escape. Cao Cao’s sailors were burned to death or drown. Cao Cao’s navy suffered a great loss. This was known as the famous Battle of Red Cliffs.

Another story that illustrates the use of the “Continuously Linked Strategy” was also from the Period of Three Kingdoms (220-280). This strategy was employed by Zhu Ge Liang, one of the greatest strategists in Chinese warring history.

Zhu Ge Liang led the Shu army to attack the District of Han Zhong, defended by Cao Cao himself and his Wei army. Both armies met at the opposite banks of River Han Shui.

Zhu Ge Liang ordered a famous Shu general, Zhao Yun, to lead 500 soldiers to hide upstream. He was to sound battle drums when he heard signals from the main camp, but he should not venture out to fight.

At night when the Wu army was sound asleep, Zhu Ge Liang gave signals and Zhao Yun and his soldiers sounded their battle drums. The Wu army got up from their sleep and was ready to fight, but there was not an enemy around. So the Wu soldiers went back to sleep.

Then they heard battle drums again and got up ready to fight, but again there was not an enemy around. This happened a few times every night for many nights. The Wu army became weary. Cao Cao had to retreat many miles from the river.

Zhu Ge Liang led the Shu army across the river and encamped on the opposite shore. Zhu Ge Liang ordered a Shu general, Liu Feng, to engage the Wei army in fighting. Cao Cao sent a Wei general, Chu Gai, to meet him.

After a few rounds, Liu Feng pretended to run away, with Chu Gai in pursuit. When the Wei army was tricked into a narrow valley, the Shu army came down from their ambush. The Wei army was in confusion and lost many soldiers.

While still in confusion the main Wei camp was attacked by two prongs, led by Zhao Yun and an old Shu general, Huang Zhong. Cao Cao retreated to the fort of Yang Ping.

With confusion everywhere and attacks coming from all directions, Cao Cao decided that a viable solution was to lead his army to fight through the blockage. He was met by a Shu general, Liu Feng. After a few rounds of fighting, Liu Feng pretended to run.

Cao Cao chased for a short distance, then realizing that it might be a trap again, he turned back to Yang Ping. Just then, the Shu army returned with more vigour and greater forces. A Shu general, Wei Ting, shot an arrow which hit Cao Cao’s teeth. Cao Cao retreated with his Wei army, and the District of Han Zhong was taken by Shu.

The Normandy Landing, the largest seaborne invasion in history which signalled the eventual victory of the Allied forces over Nazi Germany in the Second World War was a good example of the application of the “Continuously Linked Strategy”.

Preparation for the Normandy Landing which happened on 6th June 1944 began two years before, and was codenamed Operation Bodyguard. The aim of the operation was to deceive the Germans as to the location and date of the landing. This was the strategy of “Sound East Strike West”.

The strategy was so effective that Germany focused its main defence at Calais, and on the night of the landing, the German Commander-in-Chief, Field Marshal Erwin Rommel, was back in Germany to celebrate his wife’s birthday, and most of the German defence was mainly at Calais, where across the sea the distinguished British soldier, Leutenant General George Patton, was stationed.

During the landings, the Allied forces conducted airborne attack behind the enemy front. But they were not real soldiers. They were dummies with explosive which gave off a lot of distracting noises on landing. This was the strategy of “Trick Tiger Leave Mountain”. The German sent forces to combat these dummies, thus neglecting the actual landings at Normandy coast.

The Allied forces gave an impression that the Normandy Landings, which were real, were only a diversion. The “real landings”, with which the Allied forces deceived the Nazi Germans, were somewhere else, like at Calais, the Balkans, Norway or the Soviet attack on Bulgaria. This is the strategy of “Deceive Heaven Cross Sea”.

Nazi Germany had no idea where the Allied forces would attack. Hence the German forces had to be spread out, with fortifications all along the Atlantic coast from Spain to Norway.

A particular spectacle shop in an Asian country was enjoying good business all along. Then suddenly there were some small businessmen starting hawker stalls around the shop selling spectacles. Some of them even sold spectacles at the road side.

Their prices were much lower than those of the big shop, and they announced that customers could get their spectacles immediately. These hawker stalls greatly affected the business of the big spectacle shop.

The general manager of the spectacle shop studied the situation and analysized the strong points and weaknesses of these hawker stalls. Their strong points were that heir prices were low and customers could obtain their spectacles immediately. Their main weakness was that they did not have professional knowledge. The general manager drew up a “Continuously Linked Strategy”.

Firstly, he used the strategy of “Point Mulberry Scold Acacia”. He had advertisement in newspapers and cinemas that it was important to make spectacles from qualified professionals. Customers might pay low prices for badly made spectacles, but would spoil their eyes.

Then he used the strategy of “Ascend Roof Remove Ladder”. An important strong point of the hawker stalls was that customers could get their spectacles fast. The general manager organized a few motor-cyclists, who delivered ready spectacles to customers, saving them the inconvenience.

With this “Continuously Linked Strategy”, the general manager not only regained the business he lost to the hawker stalls, but created more business for his shop. 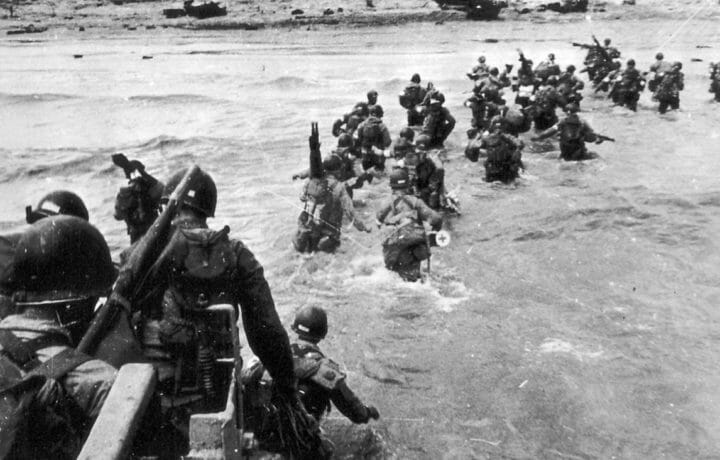