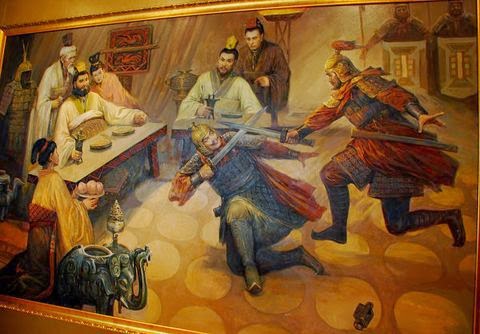 The feast at Hong Gate, picture taken from http://chineseaesop.blogspot.com/2014/05/the-feast-at-hong-gate.html

In Chinese this strategy is called “zou wei shang”, which is literally translated as “escape is top”. Top may mean good, or the best.

Escaping is not being defeated. It is running away because of disadvantageous conditions, and coming back to fight when conditions are advantages.

Xiang Yu and Liu Bang were the two warlords who eliminated the Qin Dynasty. In the year 206 BCE Xiang Yu was very angry when he heard that Liu Bang would make himself king. So he invited Liu Bang to a banquet at Hong Gate, and planned to kill him.

Liu Bang was undecided whether to attend. He knew that his life would be at stake if he attended the banquet, but since Xiang Yu was more powerful it would give Xiang Yu an excuse to eliminate him if he did not attend. So he consulted his strategist, Zhang Liang, who advised him to attend.

Liu Bang pretended to be drunk, and wanted to go to a toilet. Seeing that Liu Bang was drunk, Zhang Liang accompanied him. Liu Bang took the opportunity to escape.

After making sure that Liu Bang had escaped quite far away, Zhang Liang returned to the banquet and told Xiang Yu, “My lord, Liu Bang, was not feeling well. So he had to return home early. He had asked me to present these two precious pieces of jade to you and to General Fan Zeng.”

At the beginning of the Period of Three Kingdoms (220-280 CE) before Liu Bei had established his own State of Shu, he served under Cao Cao, the Prime Minister. Cao Cao, who was very powerful, asked the Han Emperor to make Liu Bei a general.

Liu Bei knew that he was under the control of Cao Cao. He hid his ambition to start his own state. To avoid his secret ambition known by others, especially Cao Cao, Liu Bei spent his time growing vegetables in his garden. Seeing this Cao Cao thought that Liu Bei lacked ambition, and did not pay much attention to him.

One day Cao Cao and Liu Bei received intelligence that an enemy warlord, Yuan Shu, would pass near their area. Liu Bei thought to himself, “This is my opportunity to escape from the restriction of Cao Cao.”

Liu Bei proposed to Cao Cao, “Prime Minister, I can lead an army to intercept Yuan Shu and bring him to you.”

Cao Cao thought for awhile and said it was a good idea.

But fearing that Cao Cao might change his mind, Liu Bei himself proposed to the Emperor the next morning. The Emperor granted his proposal.

Hurriedly Liu Bei packed his belongs to leave. His two sworn brothers, Guan Yu and Zhang Fei, asked why he was in such a hurry.

After Liu Bei had left, Cao Cao’s strategist, Guo Jia, told Cao Cao that he should not let Liu Bei go. Cao Cao realized his mistake. He asked his general, Xu Zhu, to get Liu Bei back.

Xu Zhu chased after Liu Bei and caught up with him.

Liu Bei told the general, “This is an imperial order from the Emperor. I can’t disobey the Emperor.”

Xu Zhu, who had brawn but not much brain, was lost for words. He returned to tell Cao Cao of the situation.

Cao Cao often recalled this incident and regretted that Liu Bei escaped. Years later Liu Bei established the State of Shu and was a threat to Cao Cao.

The Great Naval Escape during the Second World War

During the Second World War (1939-1945) in May 1940 Hitler dispatched 136 regiments, 3000 tanks and thousands of bomber planes to drive the combined British and French forces to the north of France. Nine British regiments and ten French regiments were all surrounded.

Then the German Commander received a message from Hitler to halt his advance. The Commander read the message many times, and wondered what Hitler was up to.

Winton Churchill too wondered what Hitler was up to. But that didn’t matter. The halt gave him just enough time to order a huge escape. His action was decisive and fast. He ordered the British Navy to start evacuation immediately. Soon everywhere Britain shipping companies received messages from the British Navy to ferry the combined British and French forces across the sea. Later many people regarded this as the greatest telegraphic message of the War. More than 870 British ships and 300 French ships of all sizes were involved in the rescue mission.

It was indeed a miracle. In this situation, escaping was the best strategy, otherwise the whole combined forces would be wiped out.

Three Escapes due to Market Conditions

“Sir,” the young entrepeneur began, “I know I would be nowhere compared to your large, luxurious restaurant. So we have decided to cater for low income people. This will not affect your market of high-income groups.”

The elderly chief executive officer patted on the shoulder of the young entrepeneur, and replied, “Old boy, that’s a good idea. As the saying goes, well water would not mingle with river water. Both of us will make money together.”

This arrangement worked out very well. But one day, the young entrepeneur received a message from a trusted manager that due to changing market conditions, the luxurious restaurant is shifting to lower income groups.

This was bad news for the small restaurant. It would be defeated by the luxurious restaurant if they competed head-on. The young entrepeneur had to come up with expedient plans.

He did a survey and found that in the suburb of the city there were a few restaurants catering for high income groups but none for low income groups. But there were many working class people. So he ended his small restaurant in the city and started a new one in the suburb. Business turned out to be good. Soon he was making much profit. 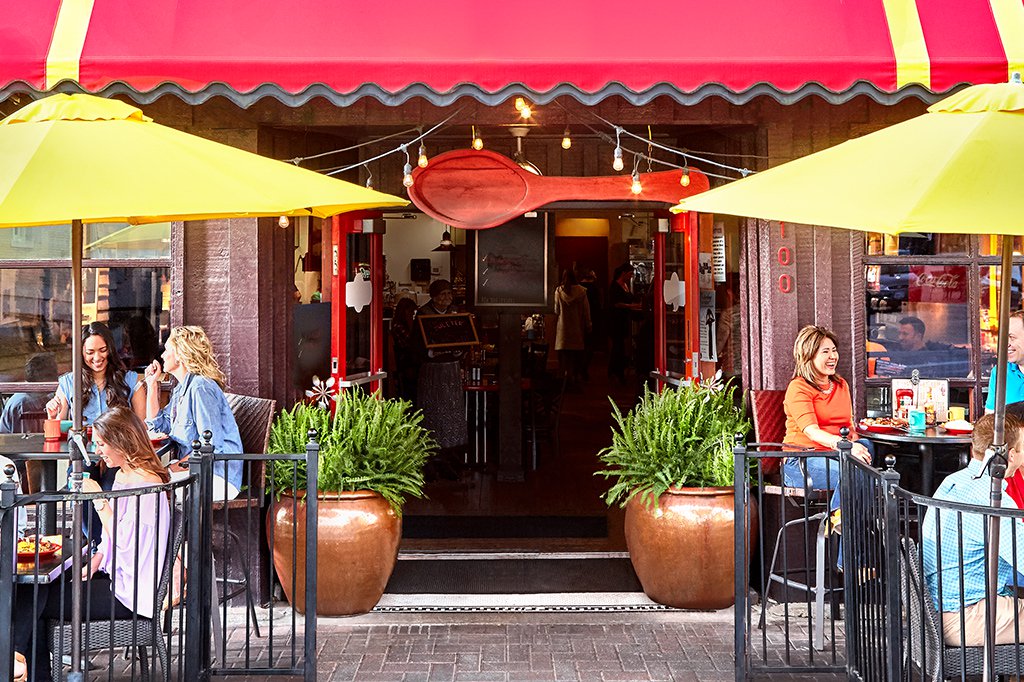 A small restaurant in a suburb, picture taken from https://www.dmagazine.com/publications/d-magazine/2017/april/best-neighborhood-restaurants-dallas/