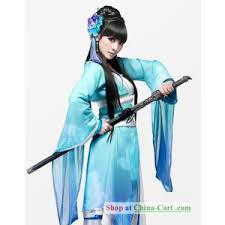 Miss Hu looked wide-eyed, unable to follow the argument. Yang appeared thoughtful, closed his eyes and tried to figure out what Chin was saying.

"If you examine the fox again, you'll see what I mean."

The fox was like any ordinary fox. Its head was pointing to the right side of the piece of fine silk on which it was painted.

"This," Chin explained as he point to the fox's head, "suggests that the artist may be left handed. A right-handed artist generally, though not always, paints an animal's head facing left. The brush strokes, especially at the tail and at the fur of its ears, confirm it. But the most convincing feature is the way she dots the fox's eye. If you scrutinize carefully enough, you can see that the finishing stroke of the dot, just as the brush was about to leave the silk, points to the left-bottom corner."

"Yes," Yang eventually said, "there are only three well known lady kungfu experts who are left handed. Miss Ma living in the capital itself, Wen Ai Ping, the Red Lady of the North East, and the fabulous Lin Su Ching of Szechuan."

"You surely have much knowledge of who is who in kungfu circles," Miss Hu said.

"That's why my father says Sifu Yang is indispensable in this investigation."

"But I must warn you, my dear Yang," Chin butt in confidently, "against making the wrong approach in criminal investigation. I bet many detectives would adopt this approach because it is easy and it seems logical, and that's why many investigations fail."

Miss Hu and Yang were puzzled.

"Remember," Chin continued, "the golden rule in criminal investigation -- and that is also the secret of my success -- is to let the clues lead logically to the suspects; certainly not select some likely suspects first, then search for possible clues to convict them. To find the suspect from the clues is surely more difficult than to find clues to suit presupposed suspects; but it is the proper approach to adopt."

Miss Hu and Yang listened like pupils listening to a master.

"Nevertheless, we must of course mark these three left handed women," Chin said. "I'll also give instructions to mark all the people mentioned by Miss Hu just now. Miss Hu, please pardon me for spying on your friends and relatives; I don't mean they are suspects, but I still can't rule out the possibility that they may provide further clues. Our culprit, we must always bear in mind, may or may not be one of these people we spy on."

"What shall we do now?" asked Miss Hu.

What else could a pupil ask a master?

"We have to find more clues," Chin replied.