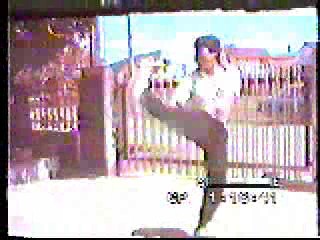 Liang Yi Chun rose to greet them as they approached the waiting room. Liang, the Chief Security Officer of the Prime Minister's Residence, was in his early fifties, but he looked and acted like a young man of thirty. He attributed his youthfulness to the daily qigong exercise in his kungfu training.

"I really don't know what to say," Liang apologized earnestly to Miss Hu.

"Please don't feel this way, Sifu Liang," replied Miss Hu emotionally. "I sincerely know that you can't be blamed." Miss Hu was not only beautiful but also kind and intelligent.

"Has there been any theft before, Brother Liang?" Yang asked.

"No. Since I served here about ten years ago, there had been some attempts of trespassing, but all the trespassers were caught."

"And since Flying Mouse was caught by Sifu Liang last year, no one ever dares to break into this Residence again." Miss Hu added gracefully.

"And he was so grateful to the Prime Minister's leniency that he turned over a new leaf," added Commissioner Chin.

"By the way, Brother Yang, how is our Master?" Liang asked. "I know that in your recent travel round the country, you made a special trip back to the Monastery to see Sifu."

"Sifu is perfectly fine. And he's asked me to convey his regards to you."

Yang's mind turned to an old, kindly monk at Shaolin Monastery. One evening he and a senior classmate was sparring. The senior was definitely too good for Yang. The senior executed a left palm attack at Yang's face, and just as Yang lifted up his left hand to block, he saw a flash of the senior's right palm across his face, fast like lightning, yet that was only a feint movement, for instantaneously he felt a powerful kick thrust at his chest, causing him terrible pain, and the next instance an ominous palm was driving into the same spot where he was just hit.

"Stop!" A thunderous voice commanded. Their master, the Venerable Ta Cher, was passing that way, and was just in time to prevent the senior's palm striking on Yang. But the thrust kick was enough to hurt, and Yang flopped on to the ground groaning.

"May blessings be on two of you."

"Blessings on you, Sifu," the senior disciple bowed. Yang was too hurt to say anything.

The master gently lifted Yang and made him sit up leaning against a tree. With his right index finger, he deftly touched a few vital points on Yang's body so as to open his meridians (or energy pathways) and let qi (or energy) flow. Then he placed his right palm about a foot in front of Yang's chest so as to channel qi into Yang's body to cleanse energy blockage caused by the thrust kick, and also to nourish injured cells. After a few minutes, some colour returned to Yang's face, and he could murmur a weak "Thank you, Sifu."

The master turned to the senior, who was trembling both from fear of the damage he had done to Yang, and from fear of reprimand from his master.

But the master said kindly, "Ah Chai, Yang is your junior, and very far behind you in kungfu skill. You shouldn't have hurt him with your kick. And your follow-up palm strike, though correct in kungfu theory, is unnecessary in this situation."

"I'm sorry, Sifu. I really am. I thought if we sparred like real fight, we would learn faster."

"It's a practice, not a real fight. If Yang is ready, if he has learnt enough qigong to protect himself from accidental injury, then perhaps you might kick or strike him with uncontrolled force. On the other hand, even if you are involved in a real fight, you don't have to hurt your opponent unnecessarily. Use "release-force" that will send your opponent flying away, instead of "hit-force" that will injure him."

The master then turned to Yang Shao Ming. "You have to practice some qigong exercise for some time to effect a cure for that injury from the "no-shadow" kick. Come to my chamber tonight, and I'll teach you these qigong exercises."

"That's a famous Shaolin kicking technique. Just now Ah Chai executed the kick so fast that it cast no shadow!"

But Yang was brought back to the present situation by Liang's question.

"Does Sifu still practice kungfu and qigong every morning before sunrise?" Liang asked.

"Certainly! And every night before retiring to bed, he does his meditation."

"Sifu has been doing that every morning and night without a break for the past seventy years, since he first arrived at the Monastery as an orphan child," Liang recalled.

"His devotion to the Shaolin arts pays off very well," Yang added. "At eighty now, he is not only a fine example that chronological age and excellent health can go together, but his senses are as sharp as any of ours."