A BEAUTIFUL GIRL IN A TEA HOUSE 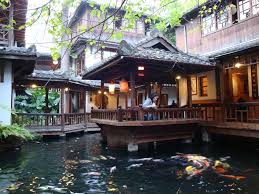 A tea-house taken from https://www.taichung.guide/a-tale-of-taiwan-tea-houses/

It was still evening. The sun was about to set into the horizon, and the homing birds had settled into their nests. Yang Shao Ming relished the beautiful memory of his first experience. That was many years ago, and since then he had a few romantic encounters. He was glad that there was nothing in the Shaolin Laws to forbid love making, in or even out of wedlock; but he was sure that it must never be done by force or deceit, or against the other's consent, or result in others' suffering. Let your life be guided by the Shaolin Laws, his master had advised.

He found it amusing that just before he left Shaolin Monastery, he had very much wanted to be a monk, to live a life of celibacy and be devoted to a higher life of spirituality. But now, only a few years later, he had become rather amorous; some people even called him the Romantic Knight. Perhaps this was what his master meant by expending his desires, by paying his karmic debts.

Whatever it was, Yang Shao Ming was a great lover of beauty -- he appreciated all things beautiful, like sunsets, music, smiling girls, loyal friends, good health and kind, little deeds.

He was now sitting alone in his favourite tea-house by a riverside. But the beautiful sunset did not attract him now, nor was he enjoying wine. He was now sipping tea. He sipped slowly, very slowly. He drank wine only when he wanted pure enjoyment, in the company of pretty women or loyal friends. He sipped tea when he wanted solitude, or to think over his problems. He did not want wine or women to distract his reasoning.

He had just thought about his amazing first experience with the pretty, shy girl. Now he was thinking of Fragrant Fox, of the clues left by Fragrant Fox, and of the future clues he, Commissioner Chin and other detectives all over the country would find to catch Fragrant Fox. Almost three days had passed. Chin must have received some information from his elaborate network of detectives and spies all over the country. Was this Fragrant Fox as beautiful as his first girl or as Miss Hu? Or was she as ugly as the bloated landlord who lived opposite his house, who squeezed the necks of the already impoverished peasants to draw out their last juice? I would squeeze his bloated neck one day, Yang thought.

Just then a pleasant waft of magnolia fragrance floated past. And a very beautiful girl sailed into a chair directly opposite Yang.

What a distraction to my thoughts! Yang murmured to himself. What a beautiful distraction!

Many girls would drop their heads when men admire them. Others pretend that nothing has happened. But this girl is different. She responds with a warm, bewitching smile, as if to thank you for your compliments.

She looks familiar, Yang thought. Where have I seen here before?

Yang could not remember. All he could remember was Miss Hu. Miss Hu's beauty had overshadowed all the other girls he used to picture in his mind before, including that unnamed girl he first loved. Am I so flirtatious or flicker-minded, so easily replacing that first girl with Miss Hu? I'd better forget her. She asked me to forget her. May be the snares of Maya, the Cosmic Illusion, project Hiss Hu to help me forget her.

What a contrast Miss Hu and this present charming girl would make, though both are so beautiful, Yang mused to himself. One is fragile and demure, the other open and inviting. Miss Hu would blush when somebody admires her, this girl smiles gracefully.

Where have I seen her before? Yes, I'll ask her. I'll go over and ask her right now!

But Yang was just a second too late. He couldn't see this beautiful damsel now. She had been blocked completely from view by a huge man who had just sat down between him and the girl. This fool! This ugly fool! Yang could not see this huge man's face, but he knew this man must be an ugly fool, as no one with any common sense would have sat here and blocked his beautiful view. And now he heard his ugly voice.