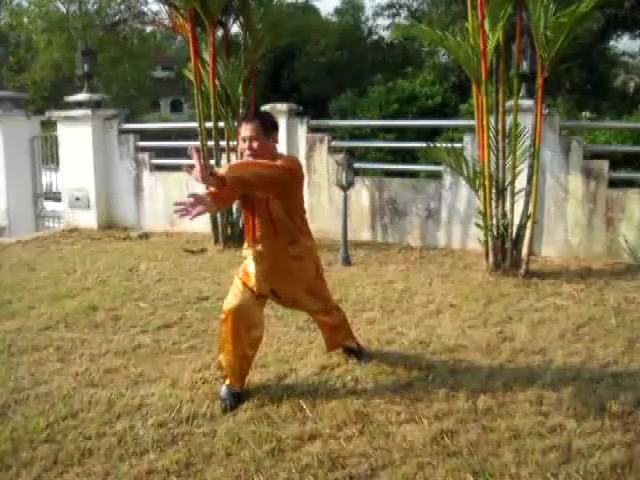 "Hei Beauty. Alone? What a shame! Never mind. Come drink wine with me."

What an ugly voice befitting an ugly fool, Yang thought. The beauty must be abhorred by it.

And now this fool rose from his seat, not to move away as Yang hoped, but to move closer to the beauty and sit beside her. And now he raised his huge, ugly arm and put it awkwardly around the beauty.

This fool was looking hungrily at the beauty, and the beauty was looking entreatingly at Yang, her eyes appealing for help. For a moment Yang imagined he saw Miss Hu's eyes, for this beauty's eyes spoke the same bewitching, captivating language Miss Hu spoke.

In a flash, Yang was beside that ugly fool, pulling the fool's arm away.

"What are you doing?" the huge man asked Yang.

"I'm just about to ask what you're doing."

"Mind your own business, you fool!" that huge man roared.

"Just imagine! That fool calling me a fool!"

But Yang did not say this orally; instead he said, "I just happen to like minding others' business."

Before Yang could complete the sentence, a huge fist was driving fast into his face.

Yang was a kungfu expert. Eighteen years of disciplined training at Shaolin Monastery could not have made him otherwise. He did not block the punch. He knew enough kungfu principles to understand the disadvantage of blocking a punch coming from someone whose shoulders reached your head.

Just as the powerful punch was about to smash into his face, Yang deftly dodged to his left, gliding the opponent's punch away with his right hand. The huge man was surprisingly fast too. Before his right punch had been fully extended, his left palm was chopping down at Yang's head, as he turned his body to his right so as to face Yang, and so as to add momentum to his already powerful chop.

Again Yang did not block, for blocking such a forceful chop might end with a fractured arm. Just as he felt the vibrating air caused by the palm coming down, he gently retreated a step into a position resembling a coiled spring; and as the chop passed him, Yang shot out like an arrow, and smashed his "butterfly palms" (formed by both palms resembling the paired wings of a butterfly) into the huge man, sending him flying back, breaking a hole on the plank wall and falling like a huge load into a river.

Yang did not bother about the victim nor the other surprised customers in the tea-house, but turned smilingly at the beautiful girl as if nothing had happened. Yang knew that the river was not deep, and that huge fallen load could pick himself up to run away. That man could not be hurt badly, because Yang used "released force" instead of "hit force" in his butterfly palm strike. Kungfu masters can strike the opponents using two different types of force -- "hit force" which could injure the opponent seriously, or "release force" which could send the opponent flying away but without serious injury.