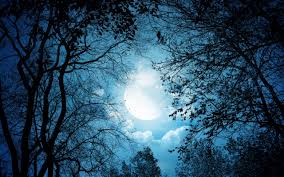 This picture was taken from http://www.wallpapermania.eu/wallpaper/beautiful-night-at-the-moonlight

When Yang Shao Ming knocked at Number 3 Phoenix Avenue, a kindly old lady opened the door. When he showed her the pink handkerchief, she eyed him scrupulously from head to toe.

"Miss Lin is very angry," she whispered. "She is waiting for you at her room over there. She says you can walk right in."

Yang smiled and generously slipped a piece of silver into her hand.

When Yang reached Miss Lin's door, he paused to take some deep breaths to calm his heart's throbbing. "I'll better knock first," he said to himself.

"Please come in," Miss Lin replied sweetly from within.

Yang felt more assured. Perhaps her anger has subdued by now, he thought.

Yet he pushed open the door timidly, and stepped in sheepishly. As he looked up, he almost jumped out of his skin!

Miss Lin was lying leisurely in her expensive bed. Except her bewitching smile, she was literally wearing nothing! Even her coiffeur had been undone, with her soft, silky hair flowing down to her silk-coloured bosom. What an amazing and beautiful welcome!

Many men consider a scantily dressed lady most exciting, because she leaves room for man's adventurous imagination. But Miss Lin was extraordinary; her body was as worthy of admiration as her beautiful face. For a few moments Yang Shao Ming was spell-bound. But he had enough sense to lock the door behind him.

"I thought you asked me here to get some wine," he finally found some foolish words to utter.

By now Miss Lin had risen and had led him -- like a cowherd leading a dazed buffalo -- back to her bed.

"I know what you really want is not wine," she whispered endearingly.

And before Yang could do anything, he found himself already lying on her bed, with this beautiful girl on top of him, kissing him all over so passionately, yet so artistically.

For a very long time he laid there, fancying that an angel had come and carried him blissfully to heaven. In the past, Yang often amused to himself how fast he had learned in the art of love making since that enchanting first experience with his pretty, shy girl, and how masterful he had become. There was much truth, he believed, in the saying that if one had the patience and endurance to bear the excruciating demand of kungfu training, and progressed well, he could learn any other thing easily. Love making, being more pleasant and less demanding, was certainly more easy to learn.

Yet, there was no doubt that in this present situation, Miss Lin was the complete mistress. This -- he gratefully and rapturously recaptured those blissful moments -- was surely the longest and the most beautiful love experience he ever could imagine.

After a long, long time, it was all over. Miss Lin had risen. She had put on her dress, and was now sitting on a stool near the bed, slowly combing her long, silky hair.