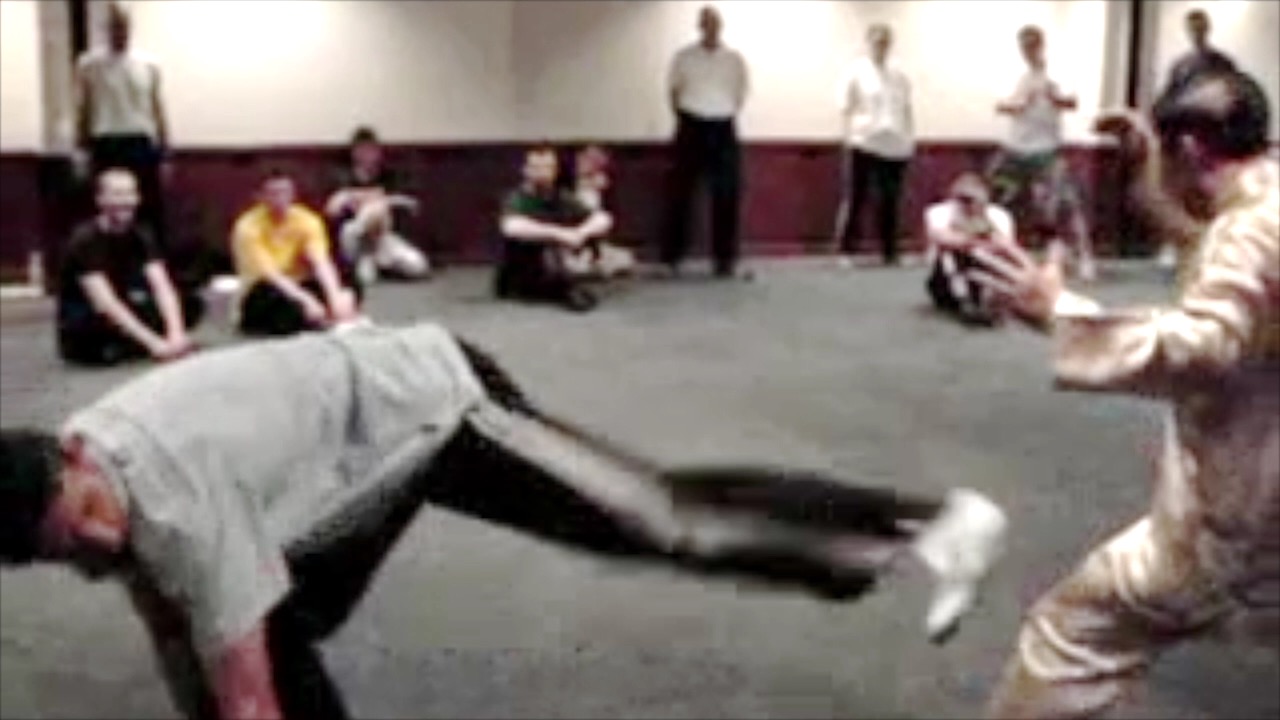 "An Arrow to Conquer an Empire", also known as "Fierce Tiger Springs Claws".

The intruder turned round and dashed out, hoping to escape. One man from the group shot out after him. Only one man. One man was sufficient, because he was as nimble and fleet-footed as a mountain deer. The other guards moved swiftly into formation. Soon the mountain deer was close behind the masked man, close enough to strike him. But he did not strike nor attempt to snatch the trespasser; instead he sped past the trespasser and stopped a few feet in front of his way. As expected, this mountain deer was the Fleet-Footed Liang Yi Chun, the Chief Security Officer of the Prime Minister's Residence.

The masked man did not stop too; he charged into Liang with a spear-hand to his chest, an attacking pattern known as "Poisonous Snake Shoots out from its Cave" -- as vicious sounding as it was deadly in application. But this attack was a feint; as soon as Liang tried to block, the masked man lowered his stance and changed the spear-hand, which was half-way through its execution, into a diagonal chop at Liang's front knee. Liang retreated his front right leg into a "unicorn step" (formed by bringing the front leg to the back, crossing the left knee with the right calf). The masked man changed his technique again, before even completing the palm-chop. He turned about his body, dropped his hands onto the ground, and thrust out his left leg in a tiger-tail kick at Liang's abdomen -- all these actions in one lightning movement.

Liang realized that the masked man was a kungfu expert -- in a split second he had executed three different attacks, changing from one attack to another precisely when the opponent attempted to counter, and executing all these movements so fluidly and fast as if they were all just one smooth action.

Liang lowered his stance, shifted his body backward so as to "absorb" the kick, and with his two hands like tiger-claws executed a pattern known as "Two Tigers Tame a Dragon", gripping the opponent's leg at the time when it had just extended its full thrust.

This time the masked man did not change his technique. Seemingly easy, Liang caught the thrusting leg. A less experienced kungfu exponent would have jumped at this opportunity to move in with a finishing strike. But not Liang. His Shaolin training taught him that if an opponent, who was normally very efficient, suddenly showed a weakness in combat, then he must be extremely careful! True enough, the weakness was actually a trick. In the next instant, the masked man, using his hands which were already on the ground to spring up and flipping back the held leg, shot out the other leg at Liang's chest -- like an arrow released from a bow. In fact, this pattern is known in Shaolin Kungfu as "An Arrow to Conquer an Empire".

Liang had anticipated this. He daftly retreated his front leg and gently pushed away the second tiger-tail kick as it reached its full extent.