SHAOLIN KUNGFU NOW AND 500 YEARS AGO

Four Gates in the Shaolin Murals 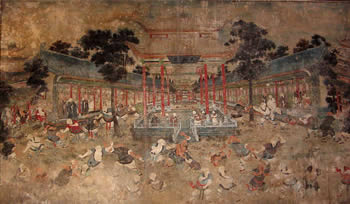 A mural at the Shaolin Temple

When I stressed that kungfu exponents used kungfu patterns and not freestyle fighting for combat, and that stances were very important, I used some close-ups from the famous murals found in the Shaolin Temple in China as illustrations to substantiate my claim. These murals depict Shaolin kungfu patterns performed by Shaolin monks for combat more than 500 years ago.

Dan Hartwright, my disciple and instructor of Shaolin Wahnam England, then sent me some photographs of the murals which he took while he trained at the Shaolin Temple. I took a closer look at these photographs. Then, suddenly, I became very excited. To my amazement I discovered that the kungfu patterns these traditional Shaolin monks practiced as shown in the murals were similar to the patterns of the Combination Set of “Four Gates” that we practice at Shaolin Wahnam Institute! Even the sequences were similar. This was most unexpected! 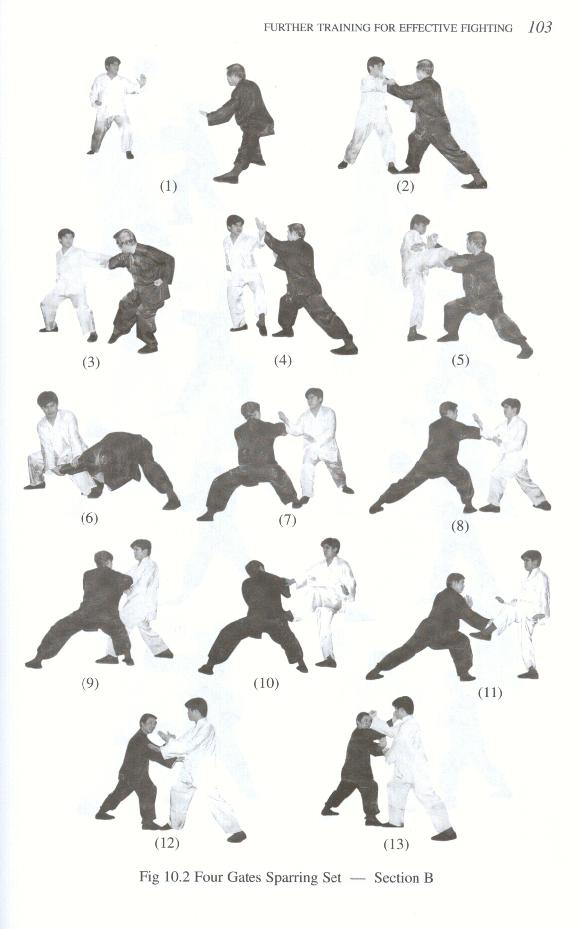 To me, this was a fantastic discovery. “Cross-Roads at Four Gates”, or “Sap Tze Seai Moon Khoon” in Cantonese, and “Shi Zi Si Men Quan” in Mandarin, was the fundamental set at the southern Shaolin Temple, my sifu, Sifu Ho Fatt Nam, from whom I learned the set, told me. In fact this was the set that my sifu took special importance in teaching me. It was the only set he taught me completely. In other sets he might start the teaching, but left it to my senior classmates to complete the instruction.

Years later while teaching kungfu and chi kung in Australia, I had a rewarding conversation with an elderly Chinese gentleman. When “Cross-Roads at Four Gates” was mentioned, his eyes lighted up. He said that in his youth he learned this set from his sifu, Ng Yew Loong, and he told me this set was passed down from the southern Shaolin Temple. Ng Yew Loong learned from Chan Fook, a lay disciples at the southern Shaolin Temple.

It was a surprise. I told him that Ng Yew Loong was my sigong (teacher's teacher), and he would then be my sisook (teacher's brother). Interestingly, I learned my “Four Gates” not from Uncle Righteousness (who learned from Sigong Ng Yew Loong), but from Sifu Ho Fatt Nam. The lineages of Uncle Righteousness and Sifu Ho Fatt Nam were different, but both led back to the southern Shaolin Temple.

It is inspiring to have further confirmation from the Shaolin murals that “Four Gates” was directly from the Shaolin Temple. It is not a well known set — not many martial artists know about it — and it is not spectacular to watch. But it is profound, and can be appreciated at different levels from novices to masters. Those invited to attend my coming Special Shaolin Kungfu Course will learn both “Four Gates” and its Combination Set, and will be likely to be amazed at its profundity in simplicity. This is Zen.

More significantly, knowing that we are learning something transmitted intact from the Shaolin Temple more than 500 years ago and still very effective today, is a great inspiration to our training. It is an interesting contrast to some modern Shaolin monks and masters who think that traditional Shaolin forms are inadequate for today's fighting and wish to modify traditional forms by borrowing from Western Boxing and Kickboxing.

The pattern in both cases is an elbow strike, known in Shaolin Kungfu as “Phoenix Flaps Wings”. Notice that the viewing angle as well as the point of time the illustrations are made, are different, though the technique and its function are the same. In the mural, the attacker is on the right side, and the picture was painted when the elbow attack was at the initial stage. In “Four Gates” the attacker is on the left side, and the attack is at the completed stage when the defender has brushed away the elbow attack and counter-attacks with a toe-kick to the opponent's ribs.

Superficially the mural illustration and the photograph from my book appear to be different, but actually they show the same Shaolin patterns and the same combat objectives in the sparring sequences. The apparent difference is due to different angles of viewing and different times the illustrations were made.

Again these two illustrations appear different, but actually they show the same patterns and the same functions in the combat sequence. In the painting, the monk on the left sinks his stance without moving his feet to avoid a middle strike from his opponent. This painting shows his transitional movement of the pattern “Hiding Flowers in the Sleeves”, before his completion with “Beauty Looks at Mirror”.

In the photograph of “Four Gates”, the combatant on the right is just about to complete the movement of “Hiding Flowers in the Sleeves”, and settle into “Beauty Looks at Mirror” to respond to the opponent's middle strike.

It is pertinent to remember that many things we (in Shaolin Wahnam) learn today were kept as secrets at the Shaolin Temple in the past when combat was often a matter of life and death. I believe that Shaolin masters at the Temple wanted to record such secrets for succeeding Shaolin disciples but did not want the secrets to be leaked out to outsiders. Painting the pictures in this way, where only the initiated would know, was a good method for this purpose.

In one of his interesting posts in our Shaolin Wahnam Discussion Forum, Ronan described a sparring session with me when he attacked me, posing as a boxer. As he attacked, he found that I did not move but he could not reach me despite his good spacing. Then, before he realized it, I had counter-attacked. What was the secret? It is found in the illustrations above. Obviously those kungfu practitioners who bounce about like boxers do, do not know the secret.

The similarities between these two illustrations are more obvious though the uninitiated may not realize them. In the painting the monk on the left executes an Organ-Seeking Kick with the pattern “White Crane Flaps Wings”, and the one on the right moves aside and simultaneously strikes the kicking leg.

The same patterns and the same objectives are illustrated in the photograph from “Four Gates”. The combatant on the right uses “White Crane Flaps Wings” to execute an Organ-Seeking Kick, and the one on the left moves aside, simultaneously striking the kicking leg.

Not only the techniques and combat objectives of both combatants are the same in both cases, the tactics and underlying principles are the same too. Notice, for example, the “shadow hand”, and the tactic of “no defence direct counter”.

The mural painting here is another example of hiding a secret in the open. Do you know what the secret is? The photograph from “Four Fates” reveals the secret quite openly — if you have been initiated. If you are not initiated, you may still not know the secret though it may be staring at you in your face.

In both cases the attackers use the same pattern, “Jade Girl Kicks Shuttle”. The defender also use the same response, “Catch a Tiger in the Mountain”. The objectives, tactics and principles are also the same. If you are uninitiated and puzzled over all these, it is no surprise. The concluding two lines of the “song of secrets” of “Four Gates” have anticipated this. The “song of secrets” is translated below.