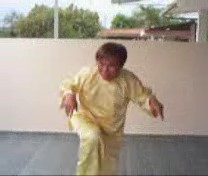 The Shaolin Monkey Set has special significance in Shaolin Wahnam because Sigung Ho Fatt Nam specialized in the Monkey. Sigung Ho, however, did not teach Sifu Wong the whole set; he explained to Sifu Wong the important principles underlying the Monkey and showed him some important combat applications.

Years earlier another Monkey specialist, whom Sifu Wong addressed as Brother Zheong, specially taught Sifu Wong not his Monkey Set (which was different from Sigung's set) but another of his specialty, the Double Knives. As Sifu Wong was much interested in the Monkey Set and as Brother Zheong had passed away then, he later sought out Brother Zheong's disciple to learn from him. Interestingly, this teacher was much junior to Sifu Wong in the kungfu circles then.

The Monkey Set shown in the video clip combines the combat applications of Sigung Ho's set and some characteristic patterns from Brother Zheong's set.