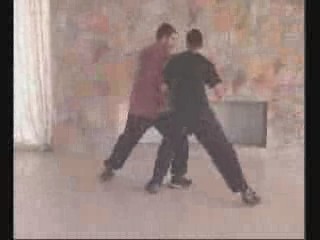 As a complete martial art, Taijiquan incorporates all the four categories of attack, namely striking, kicking, felling techniques and grips, and the counters against all these different attacks. In other words, if you are well trained in Taijiquan combat, you can effectively defend yourself against opponents using any martial styles or free fighting.

In this video clip, as Jeffrey attacks, Javier follows Jeffrey's momentum, grips his arm and pulls him to fall forward. Jeffrey relaxes his arm, follows Javier's momentum and strikes Javier with his shoulder. Here are two examples of the famous Taijiquan tactic of “using the opponent's force against himself”. Javier releases his grip and strikes Jeffrey's face, using the tactic of “long against short”.