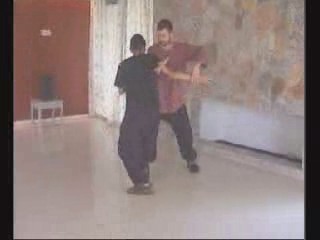 What would you do if a wrestler or grappler twists your arm to your back and locks it?

A good counter is to use the Taijiquan pattern “Carry Tiger Back to Mountain”. Using the opponent's force against himself, you will not only release his grip but also throw him onto the ground, as illustrated in this video clip.

This series of video clips show the application of basic Taijiquan skills and techniques in implementing all the four categories of attacks, and how to counter them. Indeed, all these four categroies of attack and defence are found in this series itself. When you are well trained in these basic skills and techniques, not only you can apply Taijiquan against opponents who use Taijiquan or other kungfu moves but also opponents who use other martial systems or who fight in unorthodox ways.