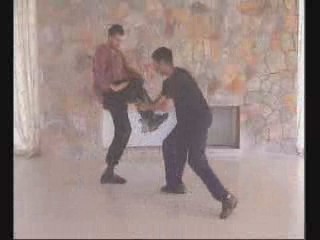 Taijiquan is a complete art. This means a skillful exponent can use Taijiquan to handle any forms of attack, without borrowing techniques from other martial systems. In other words, there is no need for a Taijiquan exponent to cross-train.

This video clip illustrates how you can apply Taijiquan techniques to counter a thrust kick as well as how to get out if your kicking leg is grasped by an opponent.

Jeffrey initiates the attack with two middle level punches, then executes a thrust kick. Javier dodges and grips the attacking leg, using the “lu” technique or the pattern “Carrying the Cosmos”.

Following the attacker's momentum, Jeffrey moves forward with a hanging fist. Javier has to release the leg to defend against the attack on his head, which could be fatal.