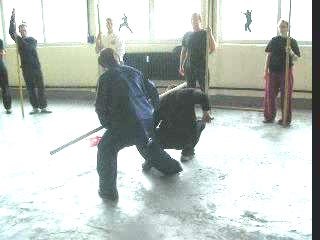 What is meant by being marvelous? There are many manifestations. One manifestation is that when you think you have known it all, you are then exposed to a skill or technique that surprises you but which you find so natural that you wonder why you haven't thought of it before.

Some marvelous techniques were revealed at the Flowing Water Staff course in Frankfurt, Germany on 16th September 2009. This course, however, was not video-typed. But luckily Irina captured some videos at random, and some of these are posted here to show how you can use a staff to counter a spear-thrust.

The spear-thrust is considered the most formidable attacking technique in weapon combat. Hence, in traditional kungfu culture, one is regarded as competent in the use of a weapon only if he can use his chosen weapon to defend against or counter a spear-thrust. 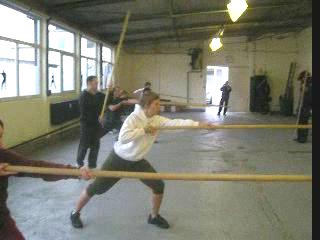 Basic Force Training with a Staff

These two patterns, "One Strike on Head" and "Yellow Dragon Emerges from Cave", found right at the beginning of the staff set are meant for force training. Of course they also have their combat functions. 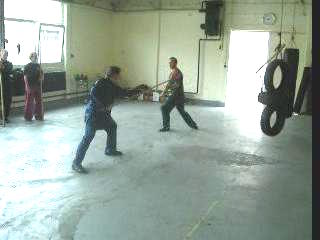 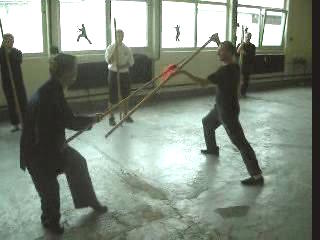 Injuring an Opponent with Every Move

Nevertheless there are some marvelous techniques involving the spear-thrust. You can injure an opponent with every move! The interesting aspect is that uninitiated observers may not see anything marvelous in the movements. In other words, an opponent find himself defeated without actually knowing why. 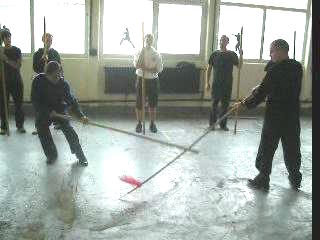 Six Techniques to Counter a Spear-Thrust

How would you counter a spear-thrust, especially from an opponent who is trained in applying sophisticated spear techniques? Six techniques are shown in this series, called in Chinese (Cantonese) "chan", "khaik", "chair", "thek", "ngat", "kham", or "vibrate", "strike", "cover", "fell", "press", "capture". 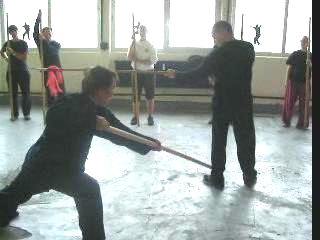 Striking the Opponents Arm or Leg

Another technique is to deflect the spear-thrust and immediately strike the opponents arm or leg. Then follow up with a decisive strike. 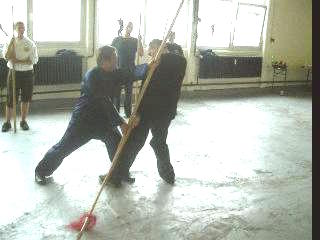 Cover the Opponent so that he Cannot Use his Spear

Another effective technique is to cover or control the opponent so that he cannot use his spear. Then follow up with a decisive strike. 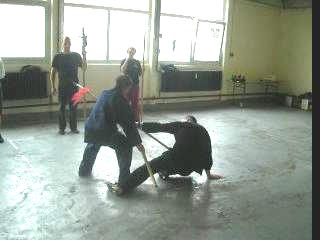 Felling an Opponent and Removing his Spear

After "taming" an opponent's spear, you can move in to fell him, and remove his spear or strike him decisively.

Pressing Down an Opponent

Besides felling an opponent, you may press him down so that he no long is able to fight. You may then take away his spear or strike him decisively. 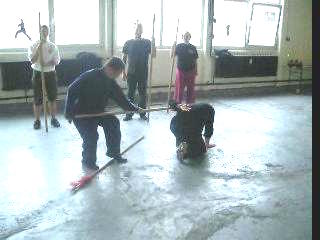 Disarming and Capturing an Opponent

Here is a marvelous technique to disarm an opponent and capture him. 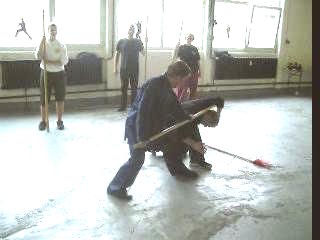 Another Marvelous Technique to Capture an Opponent

Here is another marvelous technique to disarm and capture an opponent. It is very important to ensure your safety from his spear attack when doing so.