HOW DID PAST WING CHOON MASTERS DEAL WITH WRESTLERS AND GRAPPLERS? 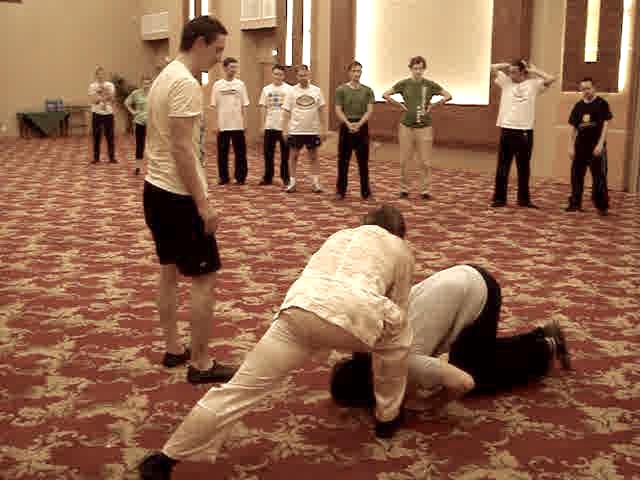 "Plucking Coconut" is an excellent counter against the shoot. But be careful not to hurt your sparring partner in training.

If wrestling techniques and their counters were not originally found in Wing Choon Kungfu, how would past Wing Choon masters deal with wrestlers and grapplers? The masters had no need for these counters. If an opponent were so foolish as to dangerously expose himself to attempt a shoot or a take-down, he would be killed or maimed. "Tiger Crouching on Ground" and "Plucking Coconut" are two effective counters to stop a shoot or a take-down. These counters could break an opponent's neck or skull.

On the other hand, if the opponent were so fast or powerful that he could take a Wing Choon master down before the latter could respond effectively, the former needed not do this extra work. He would be faster tearing out the master's genitals.

But our society is different. Learning these techniques and counters is not only fun but useful. When a wrestler or grappler attacks us, we would not want to kill or maim him; responding with appropriate counters would be necessary.