THE MECHANICS OF TAIJIQUAN IN OVERCOMING BIGGER, STRONGER OPPONENTS 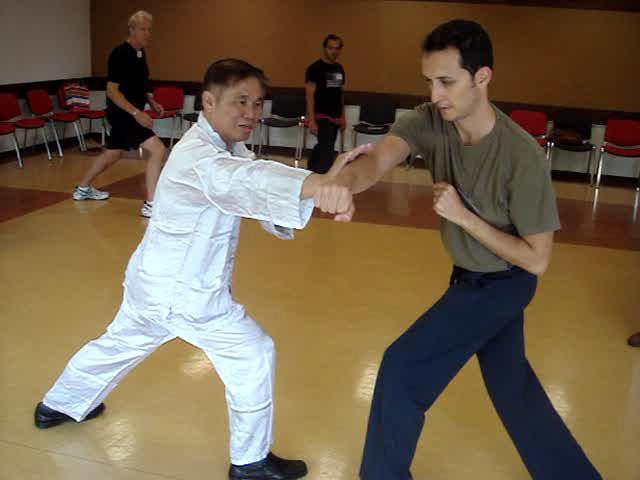 Rotating the Waist is very important in Taijiquan mechanics

How does a small-sized Taijiquan practitioner overcome a bigger, stronger opponent?


It is well-known, at least amongst those who know it is a martial art, that Taijiquan is excellent for small-sized practitioners to overcome bigger-sized and physically stronger opponents. But today even amongst those who practice Taijiquan, not many understand why this is so, much less how to demonstrate this incredible martial ability.

There are two reasons why smaller-sized exponents can overcome bigger-sized and physically stronger opponets, namely

If you have one of the above two factors, you can apply Taijiquan to overcome a bigger-sized and physically stronger opponent. Of course, if you have both, the feat becomes easier.

But why is it that thousands of Taijiquan practitioners who have practiced "Grasping Sparrow's Tail" are unable to overcome bigger, stronger opponents?

It is because of the following reasons, usually in the order stated below:

Let us take the first point. To save time, it is sufficient to look at the first pattern of "Grasping Sparrow's Tail", which is called "Immortal Waves Sleeves". The remaining patterns follow the same principles.

The principles are straight-forward. They are no tricks or play of words. But, of course, by merely reading the words the uninitiated would not know what the principles mean. Hopefully, the following three pictures may make things easier.

The following video may make things even easier. Please click on the picture or the link to view the video.


Let us examine the three steps as dictated by the three principles. Please remember that all the three steps are performed continuously and smoothly, with no pauses in between. The division of the smooth process into three steps is for convenience of understanding.

In the first step of "Starting from the Back Leg", see the first picture above, notice that most of the body weight in on the back, right leg. The weight distribution between the legs is about 10% in front and 90% at the back.

As you move your front, left leg in front to form the left Bow-Arrow Stance, much of the body weight is still at the back leg. This is very important. Failing to observe this is a common mistake made by many students. The weight distribution is about 30% or 40% in front and about 70% or 60% at the back. It is also important to position your feet correctly to form the base of the Bow-Arrow Stance.

In the second step of "Rotating the Waist", see the second picture, you just do that, i.e. rotate your waist. This is the crucial point in Taijiquan mechanics.

As you rotate your waist, your body turns - without you consciously moving your body - and you gradually transfer your weight form the back leg to the front leg so that when you settle at the Bow-Arrow Stance, your weight is evenly distributed 50%-50% between your both legs.

Now let us say your are performing the two steps of "starting from the back leg" and "rotating the waist". For orientation purpose, suppose you are facing north. The two hands "Carrying the Cosmos" move from the north in front to the west on your left. Actually the hands do not move; the movement is due to the rotation of the waist. In other words, the position of the hands moving from the north to the west is not because the hands move but because of the rotation of the waist. This is a crucial point in Taijiquan mechanics, and is sometimes referred to as "movement comes from the waist".

In the third step of "completing at the hand", you move your hands slightly to complete the movement of "Immortal Waves Sleeves". You start your hand movement after you have rotated your waist about two-third of its way, and you start your waist rotation from your back leg. In other words, you start "Immortal Waves Sleeves" from your back leg, rotate your waist and complete your movement at the hand. All these steps are performed smoothly and continuously without break.

This is head-on defence, not what a Taijiquan practitioner would do

But if you use Taijiquan mechanics, you need only 10 units! How is it accomplished? You move your defence following the momentum of the attack, deflect it along the way, and when the attack is spent you turn it back to the attacker. You move your defence from north-north-east to south-south-west, or from north-north-west to south-south-east. When the attack is spent, you smoothly reverse your movement which is now a counter-attack back to the attacker.

The following pictures may make this clearer.


You can have a clearer idea by viewing the video below. Please click on the picture or the link to view it.


When you can understand the principle of "Immortal Waves Sleeves", perform the technique in solo well, and apply it in combat competently, you can progress to other techniques in "Grasping Sparrow's Tail", and eventually to other Taijiquan techniques.

Mechanics of Taijiquan in Overcoming Bigger and Stronger Opponents from Wong Kiew Kit on Vimeo.