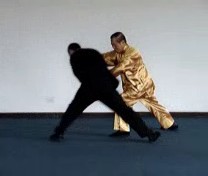 Sifu Wong demonstrates the use of “Green Dragon Shoots Pearl” in countering a backward throw. Next he shows what would have happened had he failed to neutralize the throw. In the third example, seeing Sifu Rama's hand was ready to intercept his strike, he modifies his counter-attack. Instead of striking with his right palm as planned, Sifu Wong uses his right hand to “float” Sifu Rama's defending hand, and strikes Sifu Rama with his left palm instead. All the movements were impromptu.

A Pattern for All Occasions -- Part 7 from Wong Kiew Kit on Vimeo.