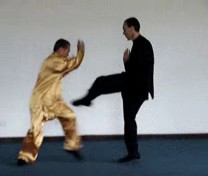 The opponent uses a right whirlwind kick. Using a left Bow-Arrow Stance and the left hand to brush away the sweeping kick would be going against the full force of the attack. Hence, Sifu Wong changes into a right Bow-Arrow Stance and uses his right hand to brush away the kick, so as to flow with the opponent's force, followed with a left palm strike on the opponent's back. Sifu Wong reminds his students to be careful with the palm strike, which may penetrate from the back into the opponent's heart in front, seriously injuring or even killing him.

A Pattern for All Occasions -- Part 6 from Wong Kiew Kit on Vimeo.