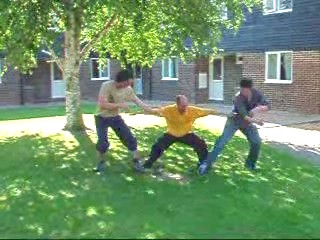 At the Summer Camp in England in July 2005, Sifu Wong asked some assistant instructors how they would overcome some combat situations posted by a reader of the Question-Answer Series. In another video clip, Innes demonstrates how to release his two arms from being held by two opponents.

As Innes is big in size, Sifu Wong said that this might give a false impression to some people that his successful counter was due to his muscular strength. So he asked Hubert, who is smaller in size, to demonstrate his technique against the same counter. Here Hubert from Shaolin Wahnam England uses the pattern “Big Bird Spreads Wings” to release the hold on his two arms by two bigger size opponents.