USING THE OPPONENT'S TACTICS AGAINST HIMSELF 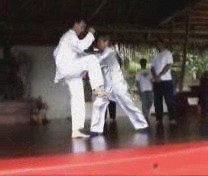 A Muay Thai fighter, or a Kickboxer, seldom makes an isolated attack. His attacks usually come continuously in a series. Often he starts with a frontal leg tap, frequently throwing his body forward in this initial move because it enables him to close in with a sweeping kick followed by a knee jab.

A good counter against the frontal leg tap is “Immortal Pounds Mortar” (called “Lohan Strikes Drum” in Shaolin Kungfu), breaking the opponent's leg with one strike. But a skilful Muay Thai fighter may use this as a feign move, then jumps in with a sweeping kick. A well trained Taijiquan exponent can play along with the opponent's tactic, then turns it against himself.

Lean back onto a Low Stance to avoid the frontal leg tap, then move your body forward to intercept his next move, striking the soft spot of his thigh or knee with one palm, and striking his chest with your other palm, using the pattern “Green Dragon Shoots Pearl” which will frustrate his following intended move.

Take note of the following two important points. Your left palm is a strike against his thigh or knee, and not a block at his shin. Blocking his powerful sweeping kick may result in your palm or wrist being fractured. Your right hand should be fully extended to keep him at arm's length, otherwise he may be able to strike you with his hands. If he attempts to strike you, sink back to avoid, then move forward to strike him.

Using the Opponent's Tactics against Himself from Wong Kiew Kit on Vimeo.