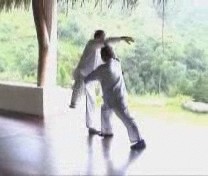 Grandmaster Wong explains that when pulling down an opponent's head while attacking him with knee jabs, a Muay Thai fighter usually holds only one side of the opponent's neck, instead of both sides. This is because gripping the neck with fingers is not allowed in Muay Thai. A good counter is a modification of “Green Dragon Shoots Pearl”.

Instead of striking the opponent's chest with your right palm, while intercepting his knee strike with your left palm, here you use your right forearm to strike across his both arms to dislodge his hold on your neck. (This pattern is called “Scissors Hands” in Shaolin Kungfu.) Immediately follow up with a kick at his groin with your knee or foot if the opponent is near, or with a side-kick if he has been bounced off a short distance away.