APPLICATION OF COLD FORCE IN TAIJIQUAN 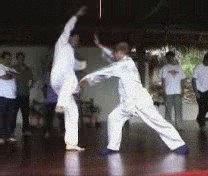 The kind of force used to dislodge the opponent's hold on the head as well as to intercept his knee jabs is known in kungfu terms as “cold force”, which is particular way of exploding force, or “fa-jin”. The force is released suddenly without tensing any muscles.

It is not pushing the opponent's arms away using tensed muscles. The opponent's both arms must be bounced away a safe distance from the face. Hence, the application by Deigo on Piti, and the application by Andrew on Dr Martha shown at the start of the video clip, are incorrect because Piti's right hand slips down on Deigo's head, and Dr Martha's right hand brushes against Andrew's face.

An effective way to develop “fa-jin” using “cold force” is practice “Single Whip” as shown by Grandmaster Wong at the end of the video clip.

Application of Cold Force in Taijiquan from Wong Kiew Kit on Vimeo.