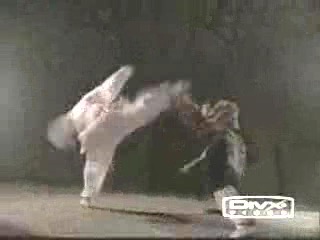 This video clip is taken from a very good kungfu movie recently produced by Jiao Yin Publication of China called “The Taiji Patriarch”, which depicts the life history of the First Patriach of Yang Style Taijiquan, the great master Yang Lu Chan.

The Taijiquan master was fighting with a master from Cho-sen, which is the old name for Korea. Notice that Yang Lu Chan mainly retreated to avoid the fast and powerful kicks from his opponent.

As in Wahnam Taijiquan too, Yang Lu Chan often used “Low Stance” to avoid the opponent's kicks. At the end of the combat, while the opponent were panting, Yang Lu Chan was calm and unruffled, which is also the case in Shaolin Wahnam.

There are, however, some differences in combat philosophy between that shown in the video clip and in Wahnam Taijiquan. We would not spin around the way it was shown at the beginning of the combat when responding to a series of round-house and reversed round-house kicks. We would also not block a round-house kick using “Jade Girl”.

Rather, we would respond with “Low Stance”, or if we are skilful enough, spin into the opponent following his turning momentum so that we would land behind him. Moreover, in using “Low Stance” we would prefer a Reversed Bow-Arrow Stance instead of a frontal Horse-Riding Stance.