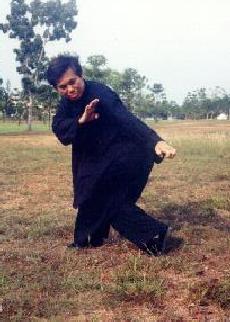 I have heard much about five survivors that came from the burning of the Shaolin temple. Since I have encountered many conflicting stories about this affair I was wondering if you could tell me what really happened.

Most people think that the Shaolin Temple was burnt only once. Actually there were five burnings of three different Shaolin Temples!

The Shaolin Temple was first built at Songshan in Henan Province in north China in the 4th century. It was burnt twice in ancient times, and then restored. But nowadays when people mention the burning of the Shaolin Temple, they usually refer to its burning by the Qing army in more recent times — in the 19th century.

A few monks escaped. One of these was the Venerable Jiang Nan. Not much was written about him in Chinese kungfu history because he ran out of China, and later passed the Shaolin arts to Yang Fatt Khuen near the Thai-Malaysia border. Yang Fatt Khuen passed the arts to my sifu, Ho Fatt Nam.

A lady Shaolin master, Liu Sei Leong, fought her way into the palace and assassinated the Qing emperor Yong Cheng to avenge for the burning of the southern Shaolin Temple. After this, Liu Sei Leong became a nun, using the name Ng Mui.

Later, Hoong Mun Thing and Wu Ah Phiew, who were respectively the son and a disciple of Hoong Hei Khoon, killed Pak Mei to avenge for the burning of the second southern Shaolin Temple.

Who were the five survivors, and what martial arts they ended up developing.

Chee Seen is regarded as the First Patriarch of Southern Shaolin Kungfu. His disciples, Hoong Hei Khoon and Lok Ah Choy, developed Hoong Ka (Hung Gar) Kungfu. Choy-Li-Fatt, Lau Ka Kungfu and Choy Ka Kungfu can be traced back to him. He was also one of the two First Patriarchs of our Shaolin Wahnam lineage, the other being Jiang Nan.

Miu Hein's specialty was Flower Style Kungfu, which was also the specialty of Ng Mui. But he did not develop any kungfu style. 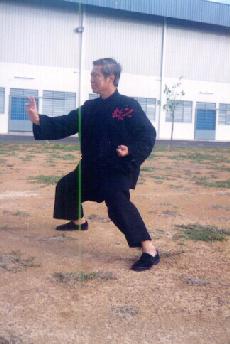 I have really been focusing on the One Finger Shooting Zen lately. My chi flows strongly through my arm to the finger tip. However I find it difficult to breathe in chi to the dan tian. All my chi is drained after performing the One Finger. When I go into the Lotus chi would usually sink quite easily into the dan tian but now there is only a few sprinkles in that region. I have tried to keep my mind on both the dan tian and the finger tip but still the problem persists. Am I issuing out too much energy through my finger? Am I not breathing in enough cosmic chi? Must I be careful not to extend the chi beyond my fingertip?

There is no need to worry about it. Just practice your One-Fnger Shooting Zen, kungfu sets or any other aspects of our arts without worrying about whether you are doing them correctly or not. You have been well trained, so it is unlikely that you would make any mistakes. Even if you make some mistakes, your chi flow at the end of each exercise will clear away the side-effects immediately. Just enjoy the exercises. This is the advice given by generations of genuine masters.

You will find that the more you relax, the more powerful you will be! This fact is puzzling to most people, especially to Westerners and those trained in external arts. In typical Western exercises for strengthening, the strength comes from muscular tension, but in internal arts the internal force comes from energy flow. The more you relax, the better is the energy flow.

There is also a common mis-conception that in order to be strong, one must not let energy flow out of his body. This is a big mistake, and may cause blockage or sometimes draining. Energy is fresh and powerful when it is flowing. If it is blocked, such as by muscular tension, mental stress or strong intent to prevent it from flowing out of the body, fresh energy can become stale and oppressive (which may make the practitioner angry or aggressive).

Hence, besides clearing rubbish from the body, energy flow (including energy flowing out of the body) makes us fresh and powerful. What happens if there is, theoretically, no more rubbish to be cleared. Will the outflow of energy from his body make him weak?

Yes, if it is draining, i.e. only outflow but no inflow, like someone indulging in excessive sex or transmitting energy to another person incompetently. But the answer is no if the flow is harmonious, i.e. smooth outflow as well as smooth inflow. For example, when energy shoots out from your finger tip as you perform One-finger Shooting Zen, fresh energy will also flow into you, making you fresh and powerful.

You need not have to especially focus on the inflow of energy from the Cosmos into your body, although if you can do so well, as in our training, your effect will be better. Indeed, it is the reverse. You need to focus (without mental stress) on your energy shooting out. This is not just for combat purposes (at an advanced level, this can penetrate Iron Shirt); it is also for enhancing health and vitality.

Even if you do not worry about breathing in, but just focus on breathing out, cosmic energy will flow into you as you shoot out the chi from your finger tip. This flow will, of course, be more effective if your meridians are relatively free from blockage. This also means that someone with much blockage and focusing on the inflow due to his mis-conception that it would give him more power, would harm himself. This is quite common amongst those who learn from books or from incompetent instructors, and, ironically, who want to get results faster than those who learn personally from masters.

I think a black belt is a white belt who perseveres in going to class.

What you think is generally not true. A white belt holder has to pass a number of tests before he becomes a black-belt. If he fails his tests despite his perseverance in going to class, he fails to become a black belt. 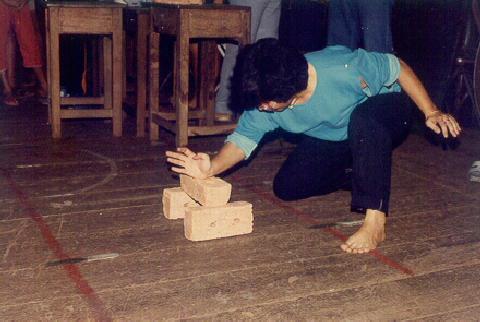 The Kung Fu style I practice is called “Gato Mayor” or “Major Cat”. I recently know a person who says he is an expert in an unknown system of kung fu. He called himself a great patriarch of the Cheng Tien Shou style, and said it was a branch of a Kung Fu. He said he had a new training for "Yamafurin ryu”. Do you know anything about Cheng Tien Shou?

I do not know about “Gato Mayor” or “Cheng Tien Shou”. They may be recently invented, but are not established kungfu styles.

“Yamafurin ryu” sounds Japanese, and “Major Cat” may (or may not) be linked to a famous Karate master who was nicknamed the Cat.

I am a Shaolin Kungfu beginner. Is there really internal force? If there is, please instruct me how to gain it.

Yes, there really is internal force. My sifu had it, I have it, and my students have it. If you wish to develop internal force, you must learn from a master or at least a competent instructor who is willing to teach you. You cannot gain it through an e-mail.

All my students who attended any of my Intensive Chi Kung Course, Intensive Shaolin Kungfu Course or Intensive Taijiquan Courses, without an exception, experienced internal force on the very first day of their course. Of course, their internal force gained in just one day was not very powerful yet, but it was real and powerful enough for them to be sure it was internal force, and not their imagination.

Many people, including some masters, have sought internal force for years, yet to no avail. Hence, many people may not believe in internal force. This is understandable, and reasonable. But what is unreasonable is that some people, knowing my offer to teach internal force in just one day and that many of my students have publicly testified to the truth of my claim, refuse to test my claim and stubbornly insist there is no internal force. 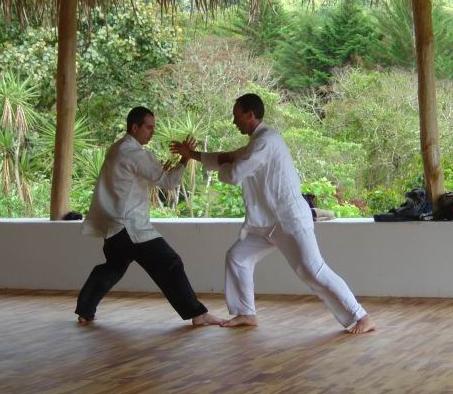 Jorge and Rama, who are both Wahnam Taijiquan instructors, practiced free sparring

I have read your book on Tai Chi Chuan and I like what you said about Tai Chi Chuan as a martial art versus Tai Chi Chuan as a “dance form”. I hope one day I will have the privilege of attending your classes. In the meantime I hope to be able to learn the basics from a good teacher. As you are probably aware, many Tai Chi classes here are conducted in community centres and also in parks. I am not sure if these are taught as dance forms or as martial arts.

Nowadays it is difficult to find a teacher anywhere in the world, not just in your country, teaching Tai Chi Chuan as a martial art. Even in China, much of the Tai Chi Chuan (spelt as Taijiquan in Romanized Chinese) taught today is a dance form, and is part of the seven categories of modern wushu.

If it is taught as a martial art anywhere in the world, it is very unlikely to be taught in community centres or parks. Traditional masters who teach Tai Chi Chuan as a martial art usually regard their art as secret, and do not normally teach openly.

Different people and on different situations have different concept regarding the basics of an art. For us in Shaolin Wahnam, the basics of Tai Chi Chuan include its typical patterns and sets, fundamental force training methods and footwork, Pushing Hands and Striking Hands techniques and tactics, as well as underlying principles and philosophy. If you refer to our Tai Chi Chuan training programme, you will find these Tai Chi Chuan basics covered in Levels 1 to 5.

Many other people, however, may have a different concept, and what they often refer to as basics is an ability to perform a Tai Chi Chuan set or some Tai Chi Chuan patterns. This is probably also what you meant. And this is also a pre-requisite for attending my Intensive Tai Chi Chuan Course.

I am therefore wondering if you can kindly recommend me a teacher, with the view of improving my health and enjoying all the positive benefits of practicing Tai Chi.

I am unable to recommend a teacher to you, but I can give some good advice to help you choose a good one.

There are three main factors to consider when choosing a good teacher or a good class, namely the teacher, his teaching, and his students. Is the teacher reliable, competent and able to help you to fulfill your needs and aspirations? Is his teaching systematic and does it produce the results the art is purported to give, irrespective of whether you practice it as an internal martial art or as a dance form? Are his students honorable and respectful, and do they reflect the aims and philosophy of the teaching?