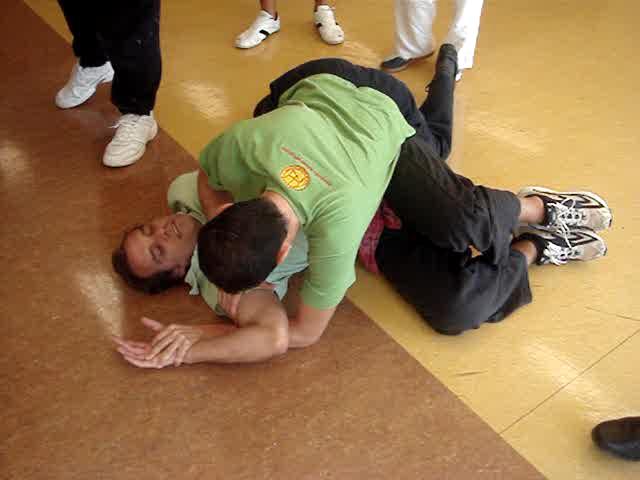 It may come as a surprise to many people that wrestling techniques like various pin-downs are found in Shaolin Kungfu too. This technique shown here is called "Green Frog Crouching on Ground" in Shaolin Kungfu.

I want to express my gratitude to you for your books and your website. I have them all. They are all very useful and informative. My question concerns self-defence. I can't agree with you that we live in a law-abiding society. May be it is applicable to Western countries. But here you have to be strong and able to defend to survive.

You have raised an excellent point which will interest and benefit many people.

If we live in a law-abiding society where fighting seldom if ever occurs, why do we dedicate so much time and effort to practice a martial art like Shaolin Kungfu and Wahnam Taijiquan?

It is because even if we never have to use our Shaolin Kungfu or Wahnam Taijiquan for combat, it gives us a lot of wonderful benefits to enable us to enjoy our daily life. First it gives us good health and vitality. Secondly it gives us mental freshness and clarity. With enhanced vitality and mental clarity, we have better results no matter what we do!

Equally important for us, our training gives us spiritual joy, irrespective of religion. Many of us have had satoris, or spiritual awakening, during our training. We literally experience our spirit expanding into the Cosmos.

All these benefits are possible only when we practice genuine, traditional Shaolin Kungfu and Taijquan, which are very rare nowadays.

I practised Taekwondo for 2 years but eventually I came to a conclusion that it was too artificial and complicated, and for tall people (I'm 160 cm in height) it is absolutely useless against Wrestlers.

I agree with you. Not many Taekwondo practitioners realize that Taekwondo is a sport, not strictly a martial art. If we follow Taekwondo rules in sparring, Taekwondo works very well.

But if we discard rules like in real fighting, Taekwondo exponents will have a lot of problems. If an opponent grabs their legs or throw them onto the ground, there are no techniques in Taekwondo to counter such attacks.

In my young days, I went round looking for black-belts for free sparring. Amongst martial artists of various styles, I found Taekwondo opponents the easiest to spar with. I would tempt them to kick, and lock their kicking leg with the Shaolin pattern "Two Tigers Subdue Dragon". If I missed their leg, I would move in to strike their ribs with a leopard punch while they were still withdrawing their kicks. 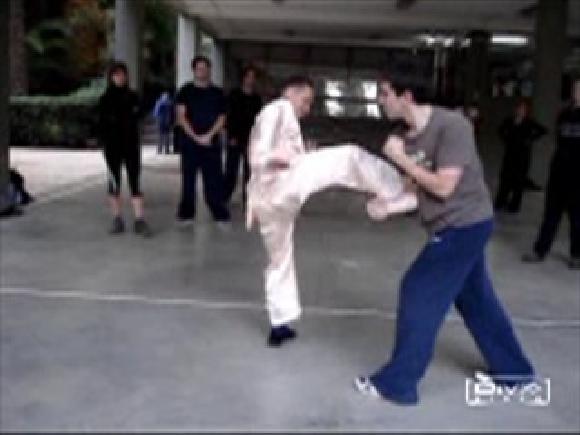 If you kick a Boxer, he has no techniques in his art to counter you

Western Boxing is much more effective.

Or when a Boxer attacks, the Taekwondo exponent needs not worry about defending. He just moves to a side and execute side kicks at the Boxer's body or arms. Unlike in Shaolin Kungfu or Taijiquan, there are no counter techniques in Boxing like gripping the kicking leg or sweeping the standing leg.

But if a Boxer or a Muay Thai fighter is not on the ground. I pick up some elements from Boxing, low sweeping kicks from Muay Thai, stop side kick to the knees from Savate, and pokes to the eyes with a finger, to the groin and to the throat.

These are effective technqies against exponents of Boxing, Kick-Boxing, Karate, Taekwondo and Judo. But you need to be careful with these techniques aganist Muay Thai fighters. They are very agile and tricky. 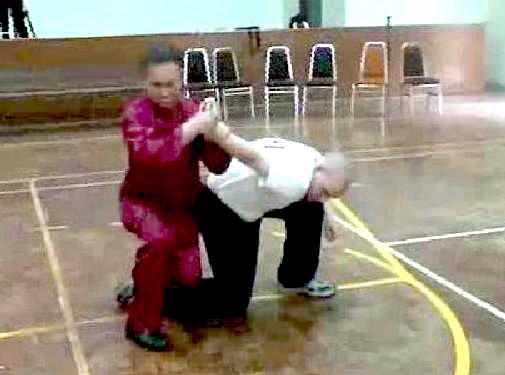 Shaolin techniques are far more sophisticated than those of other martial arts. If you hold an opponent in a chin-na technique like above, known poetically as "Jade Girl Plucks Flower", many martial artists may not know how to counter.

But I lack wrestling techniques. I strongly believe that real Kungfu is comprehensive and effective no matter what your opponent uses.

You are right. Real kungfu, which is rare today, is comprehensive and effective no matter what techniques the opponent uses. But kungfu dance or gymnastics, which is commonplace, is useless against any other martial arts, and has become a laughing stock.

Let us take the Shoot as an example. At Point One, when a Wrestler is shooting at you but has not reached you, you move your front leg backward into a Bow-Arrow Stance and simultaneously strike your palm or fist onto his head.

The trouble is that if you really strike with force, you may kill or maim him. But if you don't you may not stop him from taking you down. So you may move aside instead of moving back and strike his temple with a phoenix-eye fist or thrust you palm into his neck.

At Point Two when the Wrestler has grabbed you and has not taken you onto the ground, you move a small step back and squat down into a Semi-Kneeling Stance or a Unicorn Stance, and simultaneously jab your vertical elbow into the back of his neck or spine.

In a real fight, you would have dislocated his neck and kill him, or dislocated his spine and paralyze him. So, do be very careful you don't do this. Here, it is sufficient that you just genly touch his head or back with your elbow. You will have him under control in this position. If you lower your body correctly, you would have locked his hands with your legs, otherwise be careful that he does not grip your groin.

At Point 3, when he has taken you onto the ground, row to your side as you fall and kick his groin or ribs with your toes, poke your fingers into his eyes, or jab a leopard punch into his throat or temple. If your hands are being held, which means you are close to his body, bite any suitable part of his body with your teeth. As he releases his hold in pain, poke his eyes or jab his throat. This is kungfu; there are no rules.

Wrestling techniques are also found in Shaolin Kungfu. If you check my website, you can find many videos showing how you can counter various Wrestling attacks, including being pinned down.

I have recently started with qigong to help my acid reflux and I'm enjoying it a lot.

Congratulations for your good result.

In theory, practicing qigong (chi kung) can overcome any illness. This is because basically life is a meaningful flow of energy. If this flow is interrupted, pain and illness result. When the blockage is cleared, the flow resumes and life goes on healthily.

This is a natural process. One does not have to practice qigong to enjoy energy flow. However, if the energy flow is interrupted, practicing qigong is an excellent way to clear it.

There are many and varied intermediate factors that may cause the energy blockage. But the wonderful fact is that irrespective of what the intermediate factors are, once they are cleared, smooth energy flow is restored and the practitioner regains good health. This, in fact, is the main reason whey praticing qigong can overcome any illness.

However, in real life this may not be so. It is because of numerous limiting factors. Examples of limiting factors are practicing physical exercise instead of qigong, practicing incorrectly or insufficiently, the qigong is of a low-level, the teacher is incompetent, there are strong negative influences, or the illness has gone beyond a threshold. 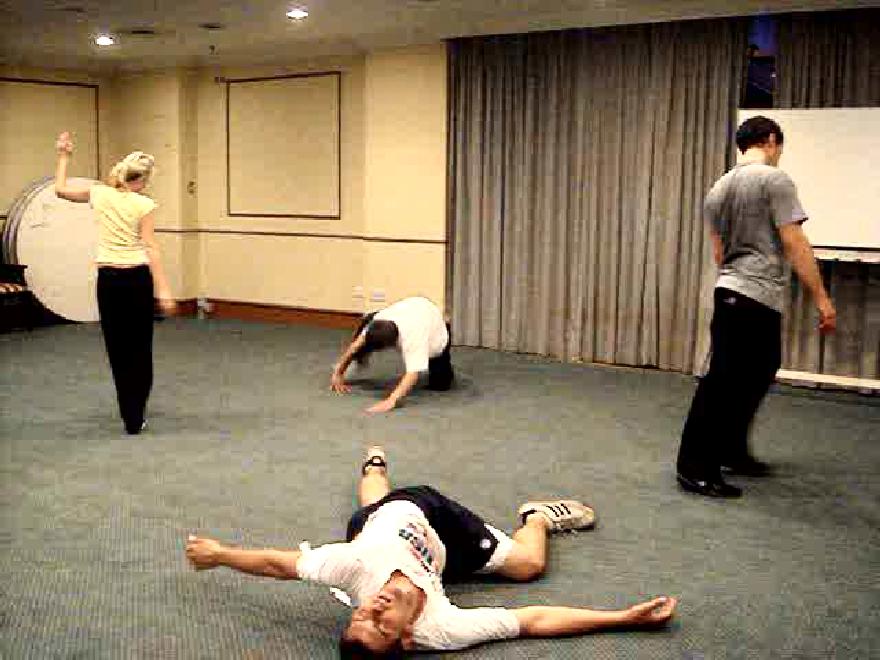 Most chi flow is gentle, like a tree swaying in a breeze. But some are vigorous, even comical, like the one above during an Intensive Shaolin Kungfu Course. Irrespective of whether they are gentle or vigorous, they are excellent in overcoming illness and promoting health.

But I got worried when I read that qigong can cause "zou huo ru mo" or qigong deviation syndrome, which I understand is some kind of psychosis or demonic possession

Your worry is unfounded and is the result of mis-information.

For those who have little understanding of qigong, the literal meaning of "zou huo ru mo" can be quite frightening. Word-by word the term means "escape-fire-enter-demon". But it is an idionatic expression. It has nothing to do with real "fire" and "demon". A less scary and more appropriate modern term is "deviation".

It is true that deviated qigong practice can cause harm. But the harm is not irreversible, and more importantly there are sufficient warning signs to show that practice has been going on wrongly. And most reassuring, the harm is not as serious as that from most other deviated practices. For all purposes, practicing qigong is safer than playing football, swimming or just walking down a busy street.

It is especially so with spontaneous qigong, which my master taught me is dangerous

Spontaneous qigong, or "self-manifested qi movement" as it is called in our school, is our platinum-card qigong to overcome illness. Even in our school alone, it has helped literally thousands of people overcome all sorts of illness, including so-called incurable diseases like cancer, viral infections and depression.

Learnt from and practiced under the supervision of a competent teacher, it is very safe. Of course, if you attempt the exercise on your own by reading a book or learning from a video, it can be risky. Yet, it is less risky than riding a bicycle resklessly along a busy street.

According to one website, qigong is demonic possession. I would very much appreciate your opinion.

The owner of the website you mentioned says, "My ultimate purpose is to publicize the dangers of the insidious esoteric and exoteric energies of the east e.g. Chinese Qigong, Indian Yoga, Japanese Zen & Rieki and Transcendental Meditation."

This statement alone shows that he is at best mis-informed, and worse he may be writing with vengeance or an ulterior motive. Let us leave aside reiki and Transcendental Meditation, which are relatively new arts, but qigong, yoga and Zen have been rewardingly practiced for centuries, including by the elite of societies like emperors and generals.

The writer may not realize it, but with the heading of his webpage referring to qigong as "jins/demonic possession", he (or she) may be misleading many people to miss an opportunity to overcome some deadly illness or to lead a rewarding life.