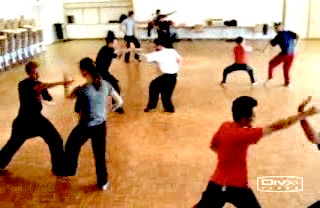 Transition From Pre-Arranged to Free Sparring

The secret enabling participants at the Switzerland Regional Shaolin Kungfu Course of August 2006 to free spar using kungfu techniques is combat sequence training. Other secrets of the sparring methodology include systematic progression and diminishing control. In other words, the participants first used pre-arranged sequences. Then they were systematically trained to release control gradually so that eventually they could free spar effectively. Of course they must have the pre-requisites of good kungfu techniques and appropriate combat skills.

The video clips below, which were taken at random and are released here without editing, show some important processes of this sparring methodology. The following points are worthy of note:

Of course they could, if their combat training is systematic, progressing from pre-arranged to free sparring. This, in fact, is what these video clips attempt to show, although the uninitiated may not be able to see the progressive steps involved. The result of this systematic training can be seen here where the sparring is free.

A crucial principle in pre-arranged sparring is to condition exponents to respond correctly and spontaneously to specific modes of attacks. For example, if their opponent executes a thrust punch or a side-kick, they would not hesitate to think what counters they should use, instead they would respond accordingly and spontaneously in the way they have been trained to do so, and in this case they would respond with "Single Tiger Emerges from Cave" or "Heavenly Priest Stamps Insignia".

It is like driving. If the traffic light in front turns red, you would not hesitate to think what you should do, instead you would slow down and stop as you have been trained to do so while learning to drive.

However, if an opponent changes a pattern in a pre-arranged sequence, would the exponents still be able to respond correctly and spontaneously? For example, instead of throwing a thrust punch according to the pre-arranged sequence, the opponent throws a kick instead. Would the exponents be able to respond correctly? They can if they have been systematically trained. Some such instances occur in the video clips shown.

Again it is like driving. The traffic light is supposed to turn red, and you are supposed to stop. But for some reasons, it remains green, and a car behind you is coming fast. Would you be able to make the right respond? You could if you have been correctly trained.

What combat sequences are involved and how did the participants learn them? Video clips showing the sequences and the learning process can be found here.

Although it is really odd, some martial artists having seen our video clips have complained that ours is not sparring because no one has been hurt! They have been so used to punching and kicking each other that being hurt in sparring, even amongst classmates in regular practice, is taken for granted. It shows how badly and sadly kungfu has degraded. They forget that the very reason for practicing how to spar effectively is not to be hurt at all.

We would like to thank Sifu Andrew Barnett of Shaolin Wahnam Switzerland for recording the videos.
Please chick the pictures below to view the videos
You can view the above videos here