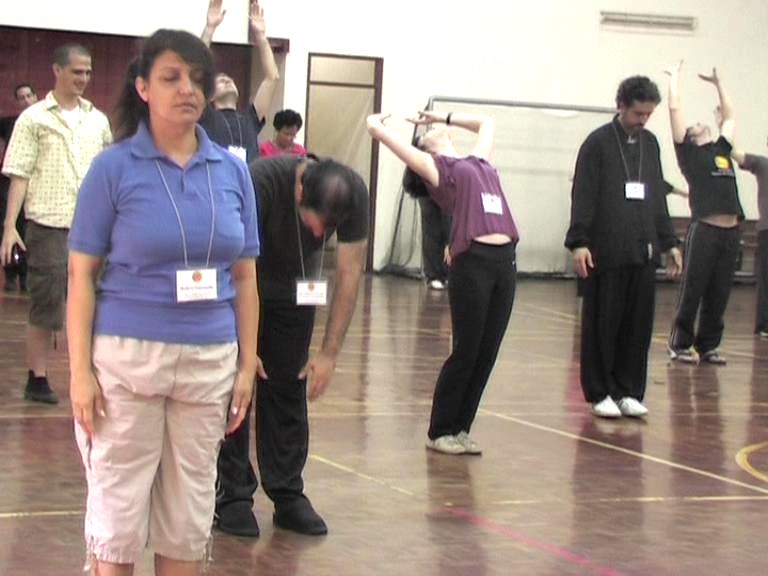 By not worrying whether their form is perfect or whether their breathing is correct, our students are able to attain a high level of mind and thus achieve remarkable results.

Sigung,
Thank you for generously sharing your knowledge and wisdom via your websites. I cannot express how grateful I feel that you are still helping and reaching out to your students past and present. Thank you again for teaching me chi kung, including helping me get into horse stance despite my knee pain, and for teaching me how to practice Baguazhang as chi kung.

I am glad you have benefited from reading my website, including my question-answer series. My website as well as our Discussion Forum, known as our Virtual Kwoon, are extension of our formal teaching. Students may often benefit from such extended teaching what they may not even obtain from their formal classes.

For example, students know from their regular classes that perfect form is important in combat. But from reading my answer to Question 8 below, they further learn that if they are skilfull, purposely performing a pattern out of form may have three advantages.

I found your advice to students who had learned chi kung and kungfu from you, but faced discouragement, had stopped for a time, or were still practicing without feeling any chi or experiencing chi flow, or getting better health. I read everything I could and discovered that I had trouble earlier because I was worried constantly due to various situational factors, and that the worries had crept into and contaminated the chi kung sessions without my realizing it.

Your answers in October 2006 Part 1 helped, as did Q & A 5 to 8 in September 2008 Part 1, Questions 7 and 8 in September 2009 Part 1, especially the solution regarding non-worrying practice mentioned in Question 3 of December 2008 Part 1. You mentioned having students who commit the common mistake of worrying unnecessarily, but I felt as if you were advising me directly, right when I needed it the most.

In many ways, worrying unnecessarily is the most serious mistake our students make. This may come as a surprise to many people. My explanation below will make this clear.

Most people are concerned whether they perform the form correctly. In our school, the form is the least important. This does not mean the form is not important, but it is not as important as energy and mind.

A mis-conception of many people is to think that to realize the energy component they must regulate their breathing, and to realize the mind component they must perform visualization. While regulating the breath and applying appropriate visualization are effective means to work on energy and on mind, they can also genuinely practice chi kung without having to regulate their breathing and without having to visualize.

How can this be? What about the energy and the mind components if one does not regulate the breathing or apply visualization?

Both the energy and the mind components are involved even when we do not worry about breathing or visualization! When performing only form without worrying about breathing, practitioners use the most common mode of breathing, i.e. natural beathing. And when they do not worry about visualziation, i.e, they do not think of anything, they enter into a chi kung state of mind, the most basic of which is to be focussed and relaxed at the same time.

In other words, when a person performs a chi kung form but without worrying about his breathing (which is using natural breathing) and without thinking of anything (which enables him to be focused and relaxed) he can obatin some chi kung benefit. But if he performs the chi kung form, even perfectly, but breathes in and out forcefully like in some vigorous physical exercise, or if he thinks of many things, he will have no chi kung benefit, because he has faulted in the energy and the mind dimensions.

For example, if he performs the form perfectly but neglects energy and mind, he gets 1 unit of benefit. If his form and energy are mediocre, but his chi kung state of mind is excellent, he gets 6 units of benefit. This, amongst other reasons, explains why we get such good results whiles others don't. We operate at the mind level, whereas other people operate at the form level. 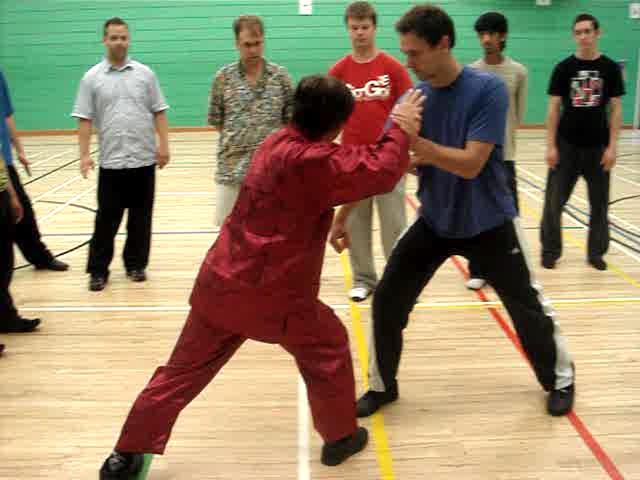 Correct form is very important in combat. But during sparring even if the form is not perfect, one has no time to worry over it.

Once the mind is tensed the body follows, and chi flow stops. Realizing this I told myself to stop worrying, at least for a year, and that if I caught myself worrying I would let it go naturally, like a fart or a burp, things become better when let go than held onto.

Within three weeks, the knee pain eased, then disappeared, and the piles are starting to lessen, some days disappear. The mind is starting to clear, and the spirit is feeling brighter and more cheerful, despite the early winter cold and my personal situation. The knowledge on your website gave me a new lease of life. Even though my knees do not have enough strength to let me jump and sprint, I can now walk upstairs with no pain! None whatsoever!

Congratulations. This is an inspiring account of your experience. Many others can benefit from it.

As you have rightly said, "Once the mind is tensed the body follows, and chi flow stops." Not only you get no benefit from the chi kung practice, you may derive some negative effect by stressing your mind.

On the other hand, even if you make some mistakes but if you do not worry over or intellectualize on them, you still get some negative effect, but your chi flows and the positive effect is more than enough to compensate for the negative effect, giving you some bonus.

I am now starting to try out the horse stance and occasionally the "santi" posture, as comfortably as I can without worrying about the height of the posture or the angle of the bend in the knees. If anything, I make absolutely sure that I feel no sense of strain whatsoever, and let go of thought and emotion.

Stance training should be a relaxation exercise, never an endurance test.

Thus, you practice stance training as chi kung, which is a training of energy and mind, and not as physical exercise. As you mind is calm and body relaxed, your chi flows and accumulates at your dan tian. 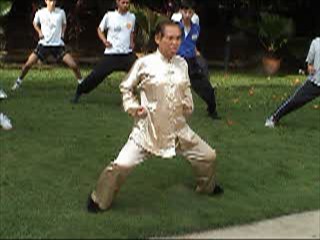 Stance training is a relaxation exercise, not an endurance test

Like some people, I too have quite a weak constitution, especially more so in the last five years, and get tired physically and mentally all too quickly. At least now I understand the importance of not worrying or intellectualizing, for at least a year, to give chi kung enough time to heal the mind and body. And following your advice in Question 5 of August 2008 Part 3, I am now practicing daily, enjoying the practice.

Soon, you will find that you have a strong constitution. This is expected.


Editorial Note Richard's other questions are posted in December 2010 Part 2.

I would like to ask about one of the Ten Tigers of Canton, Beggar Su. Would you please elaborate on where he learned his martial art?

His real name was Su Charn. He came from a wealthy family, but squandered away his money. He was not actually a begger but as he roamed the streets non-chalantly drinking wine, people nick-named him "Su Hut Hee" or Beggar Su.

Su Hut Yee should not be confused with another of the Ten Tigers of Guangdong (a province in south China famous for kungfu masters), Su Hak Fu, or Su the Black Tiger. Both were Shaolin masters, and both were expert at the Tiger Style. But Su Hut Yee was remembered by posterity for his Drunken Style whereas Su Hak Fu was remembered as the Patriarch of Black Tiger School.

Su Hut Yee learned Shaolin Kungfu from Chan Fook. Shaolin Wahnam Family members would be happy to know that he was the same Chan Fook who taught Ng Yew Loong, who in turn taught Uncle Righteousness. Therefore the kungfu that Su Hut Yee used and enabled him to be one of the Ten Guangdong Tigers was the same as that we practice. 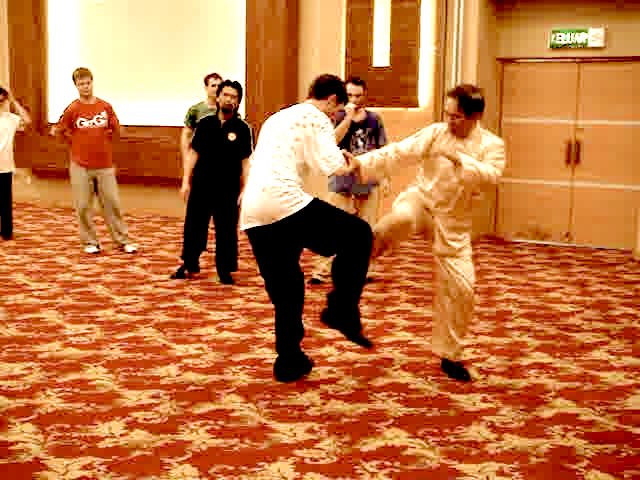 Did he really practice Drunken Boxing? If so, what kind?

Of course, he did. In fact, Su Hut Yee was so well known for his Drunken Kungfu that some people mistakenly think he was a patriarch of the Drunken Style. Actually he practiced Southern Shaolin, or Hoong Ka Kungfu as many people call it today.

There is no record of from whom Su Hut Yee learned his Drunken Kungfu. I guess that he developed it himself. As he was often in a drunken state, though not actually drunk, he performed his Hoong Ka Kungfu in a drunken way. You may have an idea of what it was like if you perform any one of our Shaolin set in chi flow, paying more attention to the chi flow than to the kungfu forms.

The Drunken Set of Su Hut Yee was of course from Hoong Ka. The set was not called by any specail name; it was just called Drunken Set, or Chui Kuen in Cantonese. It was reputed that Su Hut Yee taught his Drunken Kungfu to Wong Fei Hoong, but Wong Fei Hoong did not use Drunken Kungfu often in his fights, and as far as I know, it was also not passed down in his lineage.

The Drunken set in Sifu Ho Fatt Nam's lineage was called Drunken Eight Immortals, or Chui Pat Seen in Cantonese. My sifu did not teach me the whole set; he only taught me the main technique and its special feature of each of the Eight Immortals.

Would Sifu please briefly discuss the principles of Drunken Boxing?

Although these Drunken sets are different, they all have common characteristics that single them out as Drunken Kungfu. The most significant feature, of course, is that the technqies are performed as if the performer is drunk.

The performer is always on the move, never static at one place or in one poise. These drunken-like movements may give the impression that the performer is unstable, which is not true. A good Drunken Kungfu practitioner is both solid and agile at the same time.

Another obvious feature is that the patterns appear to be out of proper form. When you perform a False-Leg Stance, for example, you have to take care that your body does not lean backward as this renders you in a disadvantageous, awkward position. But in Drunken Kungfu, many patterns are performed like this.

Would performing kungfu patterns seemingly out of form render the Drunken Kungfu practitioner in a disadvangeous, awkward position? Yes, it does -- if he remains long enough at this poise for his opponents to exploit the disadvantage. The disadvantage is minimized when the movement is fleeting.

Moreover, the practioner, if he is well trained and not just performs Drunken Kungfu for demonstration as it is often the case nowadays, knows the innate weakness as well as knows how to respond accordingly if an opponent exploit the weakness.

Why does the Drunken Kungfu practitioner use awkward poises if he knows of their innate weaknesses? The advantages outweigh the disadvantages. One advantage is deception. Another is speed and expediency. And a third is tricking an opponent. These advantages are also characteristics of Drunken Kungfu.

Without internal force, the effectiveness of Drunken Kungfu for combat is greatly compromised. If one sits on a solid Bow-Arrow Stance and drives a hard punch into an opponent, he can still cause much damage even without internal force. But if he stands gingerly on one leg, bends his body backward and hit an opponent with the knucle of a relaxed index finger, the damage is minimal unless with internal force.