SELECTION OF QUESTIONS AND ANSWERS
MAY 2011 PART 2 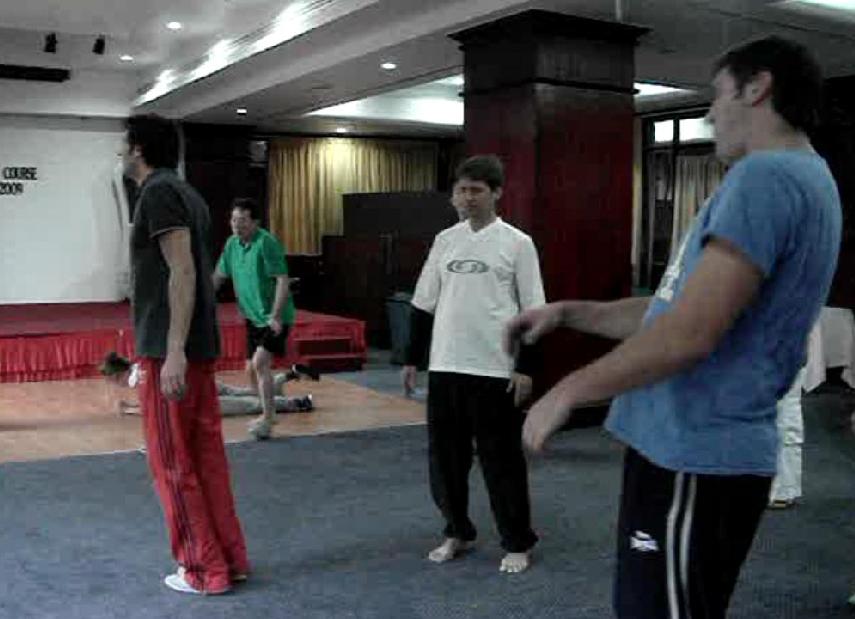 It may be hard to be believed, but a good chi flow generated by any chi kung exercise can overcome any illness!

What techniques are recommended to apply chi kung when one has flu and common cold?

There are two approaches in overcoming any pain and illness, namely holistic and thematic.

In the holistic approach, any chi kung technique can overcome flu and common cold. This may sound odd to many people, especially those used to the modern Western medical paradigm.

But according to the chi kung paradigm, when chi flow is harmonious, yin-yang harmony will be restored. Any genuine chi kung technique will generate a chi flow. Yin-yang harmony results in good health, which means that headache and common cold no longer exist.

In the thematic approach, Turning Head and Separating Water are good for overcoming flue and common cold.

If you are referring to the standing meditation we do in our chi kung practice, it will not only not hurt your knees, it can help you to recover from your knee problems. But if you refer to standing meditation done by most other people, it does hurt. For them it is better to adopt another meditation position where there is no stress on the knee, such as sitting upright on a chair. 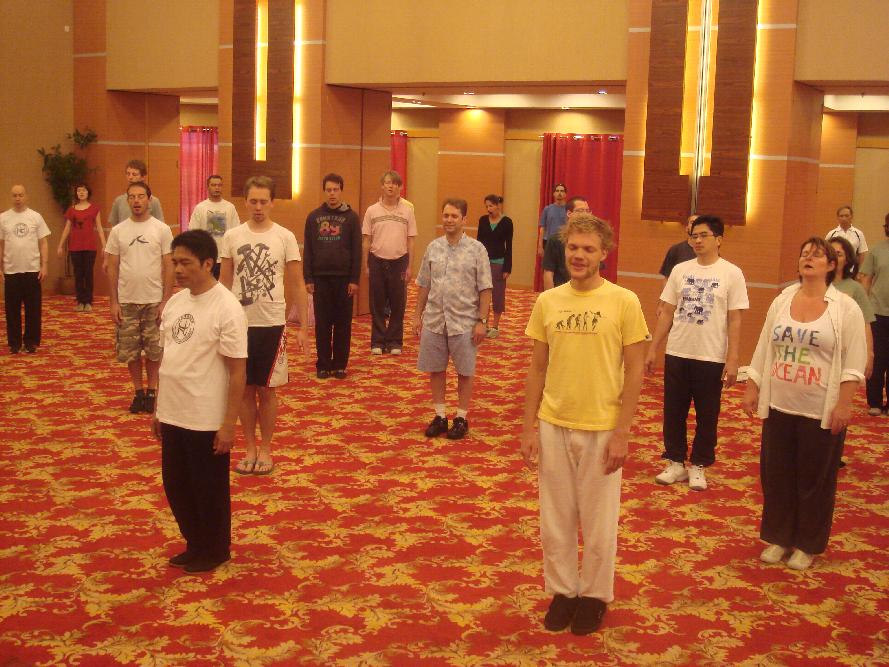 I visited my former Aikido Sensei just to say Hi. He can sense and use qi, and has internal force but he also has blockages -- the most evident ones being that he suffers from frequent headaches and always has pain in the knees. Yet, I believe he is one of the top martial artists in the country..

Our school is different from many martial art schools, including kungfu schools, in this aspect. In most other schools, the focus is on combat, sometimes to the extent of even sacrificing their health. This is particularly the case with non-kungfu styles. Boxers and Karatekas, for example, become more unhealthy the more they pursue their arts.

Originally the first concern of kungfu training was good health. There is an important kungfu saying as follows, "mei fong sun, sin keong sun", which means "before one practices for combat, he must be healthy first". However, many kungfu schools today have lost the essence of kungfu training, and like other martial art schools have sacrifice health for combat.

Our school, however, is still very traditional. While we placed much importance on combat efficiency, our top priority is good health, vitality and longevity.

My sensei asked me to perform the following exercise. While in seiza position, extend your arm to the front so that your partner grabs your wrist with both of his hands ("morotedori" in Japanese) and pushes your arm towards you, trying to bend it with external strength. You should be relaxed and with no tension, and your arm should be unbendable.

This is a good way to demonstrate the power of chi. If you are relaxed and let chi flow effortlessly along your arm, someone gripping your wrist would be unable to bend your arm with external strength. But it would be a different story if an opponent has internal force and use tiger-claw or eagle-claw. 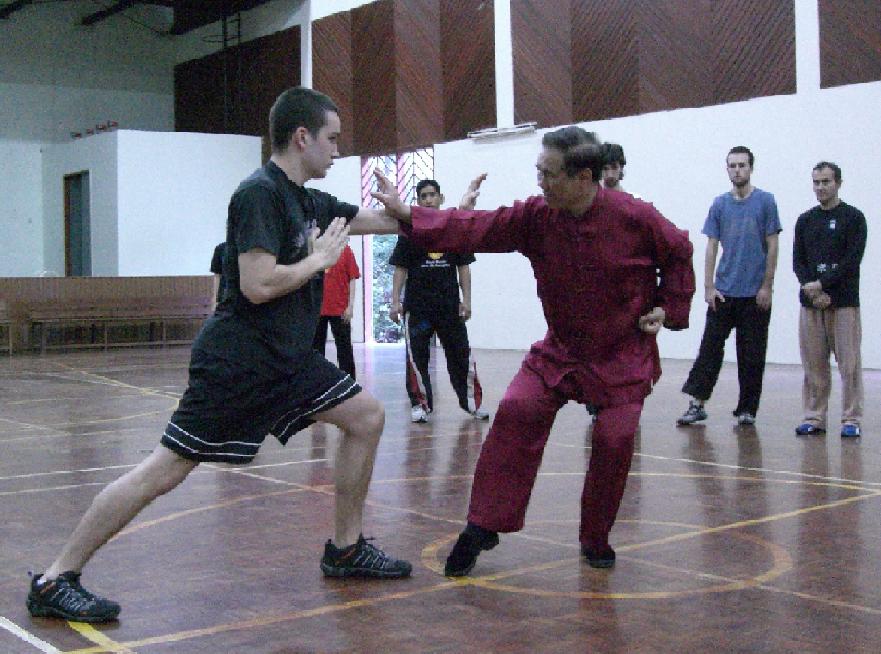 While we place much important to combat efficiency, our priorities in our kungfu training are good health, vitality and longevity

I did not want to enter the tatami and try the exercise but I felt it was not proper to refuse. I sat in seiza and my knees started hurting a lot. He told me to do Abdominal Breathing throughout the exercise.

Different schools and different teachers have different philosophy and different ways of teaching. The seiza position is widely used in many Japanese arts.

But in our school, we do not use it because from our perspective it blocks chi flow in the legs.

When my Sensei was doing the exercise on me, his palm was facing directly at my heart. I became a little apprehensive when I saw this, but didn't do anything about it.

Understandably, it was difficult for you or any student to tell the master not to do what he was doing even when you knew it was harmful for you. But if a similar situation happens again, you have to do something. You may, for example, move your position so that his palm does not face your heart. If he direct his palm at your heart again, you move a second time. If he repeats a third time, you move a third time too.

Hopefully this will stop him from placing his palm in a way which may cause you harm. But if he persists or asks you not to move away, you can politely tell him that it hurts. If he still persists, you have to politely tell him that you prefer not to carry on and hopes he would not mind. You should then perform some chi flow as soon as possible, but not n his presence, to clear off any harmful effect. 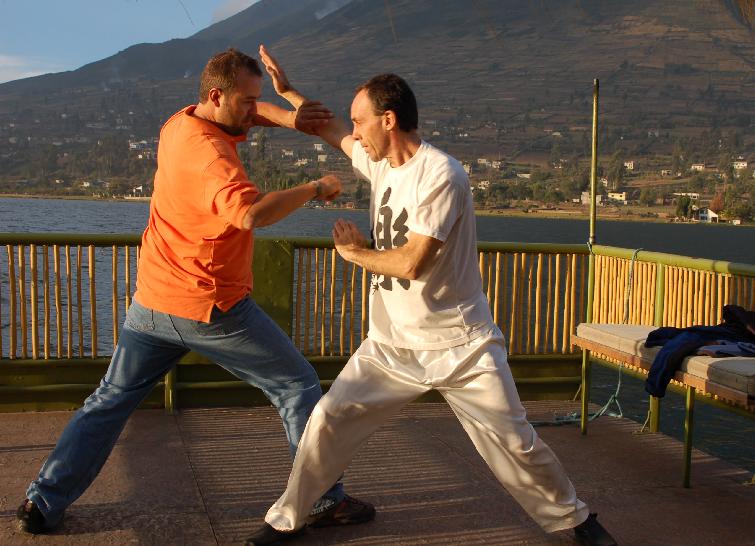 Taijiquan can be very fast, as shown here by Sifu Jose Antonio and Sifu Rama while sparring on a river-boat

I pushed and couldn't bend his arm, as expected. Then my turn came. I couldn't do Abdominal Breathing. I couldn't even enter a chi kung state of mind. It was too painful to be in seiza. I closed my eyes to try to relax but he told me to open them, I looked away as a substitute to closing my eyes but he told me to look to the front. When we finished, my knees hurt a lot. I felt like a wreck. My knees hurt and were sore for the next 10 days.

I wondered if these unpleasant effects were the result of doing that exercise, specially because of the hand directly in front of my heart, or just my imagination. Luckily, I'm all fine now, so I no longer worry about it.

You are right. You Aikido teacher caused you some injury but he himself was unaware of it. But don't worry about it now. Even if he had caused some injury, your chi flow was more than enough to overcome it.

I just started reading and studying kung fu and think it is a great martial art because of the benefits.

Practicing kungfu will give many benefits, if you learn from a good teacher and practice correctly.

Unfortunately, nowadays good kungfu teachers are hard to find. For most students it is even harder to practice correctly, which includes practicing regularly and conscientiously.

Hence, many kungfu students today not only do not derive the benefits kungfu is supposed to give, but become more unhealthy and stressful as a result of their practice. This may seem odd, but is true.

I read your book about the different forms of Shaolin Kung Fu. I want to practice these martial arts. but I was wondering about which style of kung fu is fast and aggressive.

All styles of kungfu, including Taijiquan, can be fast and aggressive, otherwise they cannot be effective in combat. They can also be performed slowly and gracefully.

When one first learns Taijiquan, it is usually performed slowly and without using any muscular strength. But as he progresses, Taijiquan can be very fast and very powerful or hard. If Taijiquan were only soft and slow, it could not be a martial art. But many Taiji practitioners themselves do not know that Taijiquan is a wonderful martial art.

While the combat function of kungfu is important, and here being fast and aggressive is necessary, you should practice kungfu for its other benefits too. When practiced correctly, kungfu contributes to good health, vitality and longevity. It also enables you to have better performance in your daily life.