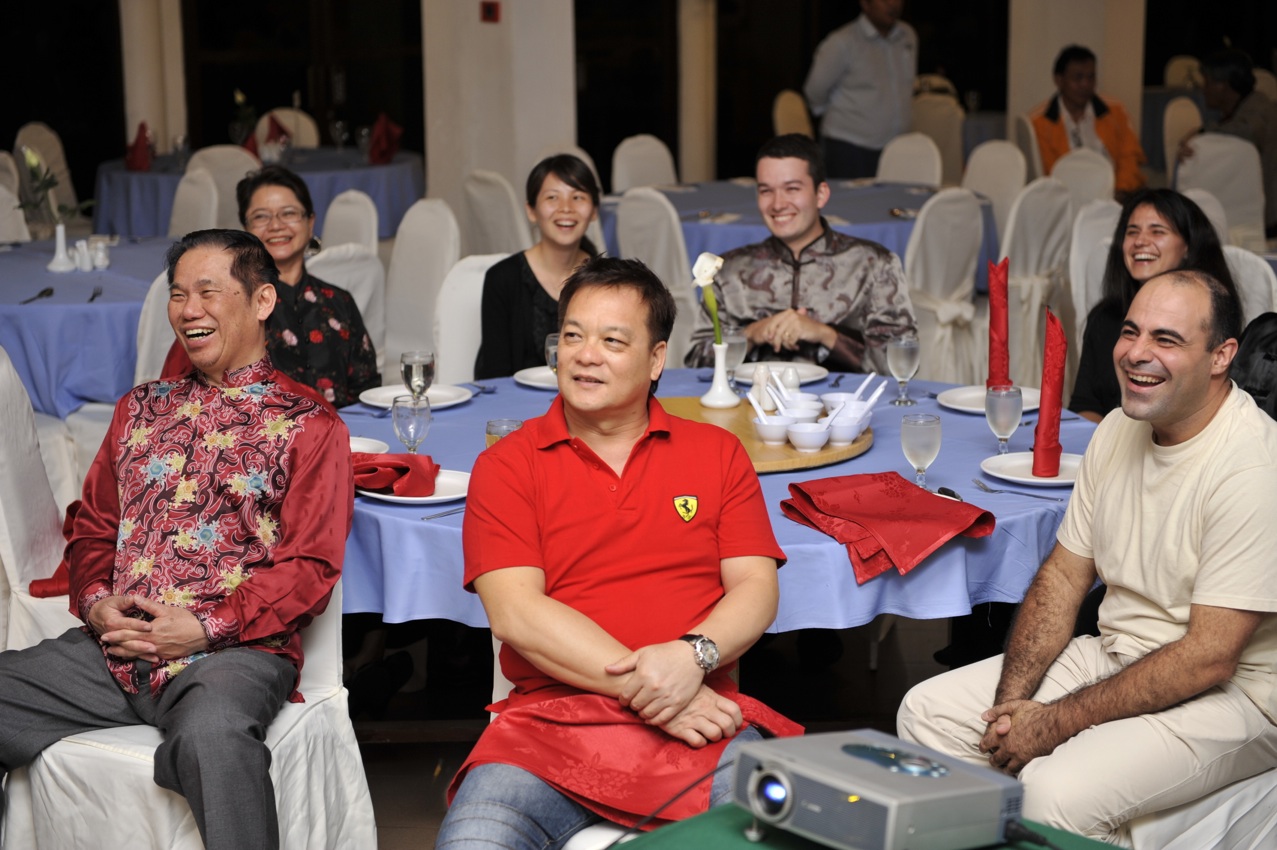 As chi flow is so important, why aren't other schools have chi flow?

There are many reasons, but all these reasons can be summed up into two as follows. Other schools do not know that chi flow is so important. Even if they knew, they do not have the skills to do it.

From these two reasons, we can go to other subsequent reasons. Why do other schools not know that chi flow is so important? Why do they not have the skills to have chi flow?

Chi flow was a top secret. It was not explicitly explained in the past, like the way we do in our school.

There was also the question of linguistics. In chi kung classics the concept of chi flow was described as "xing qi", which literally meant "circulate energy". In modern language, "chi flow" could be translated as "qi liu", but the term "qi liu" was not mentioned in chi kung classics. "Xing qi" was mentioned but not explained in detail like the way we do.

Chi kung practitioners in the past did have chi flow, but they did not realize it and their chi flow movements were not as vigorous as ours, except those who practiced a type of chi kung called Five-Animal Play.

Kungfu masters with internal force did have chi flow, but they too did not realize it. They thought their internal force was due to their dedicated training of techniques for years.

We are very generous in explaining chi flow. Such generosity was unprecedented in chi kung and kungfu history. But other schools may not believe us. Some may think that we are boastful or talking non-sense.

Those who can make sense out of our explanation may not be humble enough to learn from us. They do not appreciate the saying that it is better to be a fool for one day than to be a fool for life.

Why do other schools not have the skills to generate an energy flow?

In the first place, not many people differentiate between skills and techniques. They think that if they practice the right techniques, they will have the desired results.

This concept, though wrong, has been conditioned by centuries of past masters who succeeded in attaining good health, vitality and longevity in chi kung, or internal force in kungfu. These masters generally attributed their success to the techniques they used, and not to skills.

Skills need to be learnt from a master who is generous enough to help students acquire them, not learnt from e-mails, books or videos. Not many people appreciate this fact. There are still many people writing to me asking me what exercises are needed to overcome certain illness, despite my frequent mention in my Question-Answer Series that it is how one practices an exercise, i.e. skills, and not what exercises he chooses, i.e. techniques, that is important.

This fact is so obvious. It is actually quite shocking that so many people do not realize it, or refuse to accept it. If it were techniques that were responsible for overcoming illness, and as techniques are easily available in today’s information age, they won’t be so many sick people today.

Can you please explain how thoughts affect a person's health physically, emotionally and mentally?

Thought is the most important factor affecting karma, the other two being speech and action. In other words, what your future will turn out to be is most influenced by what you think.

Suppose a person is sick. He has been told by persons of authority that he has to take medication for life. If he believes in this view, he is likely to take medication for life. If someone tells him that practicing chi kung may overcome his health problem, he thinks that is impossible as he considers his illness incurable. Hence, his thoughts affect his health physically.

Because of his illness, he feels depressed. If someone advises him to go out to enjoy some fresh air, or to listen to some joyful music, he thinks it is a waste of time. He thinks that being depressed is natural as he is ill. Hence, his thoughts affect him health emotionally.

If he changes his negative thoughts to positive, he has a good chance to improve. When someone tells him that practicing genuine chi kung may overcome his illness, instead of thinking that he cannot be cured, he thinks that he should give it a try, he opens himself to the possibility of recovery.

If he is very positive, having found out that many people with similar health problems have overcome them by practicing genuine chi kung, he is determined to regain his good health, he will increase the possibility manifold. His thoughts affected his health physically.

When someone advises him to go out to have some fresh air, or to listen to some joyful music, instead of thinking that it is a waste of time, or it is natural for him to be depressed, he changes his negative thoughts to be positive, thinking that a change may bring him benefit, and acts on his positive thoughts, he will be emotionally uplifted. His thoughts, therefore, affect him emotionally.

When someone tells him that practicing genuine chi kung can improve his mental freshness and clarity, he believes it and gives it a try, not only he can overcome his illness but also he will attain mental freshness and clarity as these are the benefits practicing genuine chi kung will give. His thoughts, therefore, affect him mentally.

Thoughts are the most important factor in changing a person's life. Having a noble thought and converting it to speech may change another person's life. On the other hand, listening to the same speech, but depending on whether you think negatively or positively on the speech and act accordingly will change your life for worse or better. 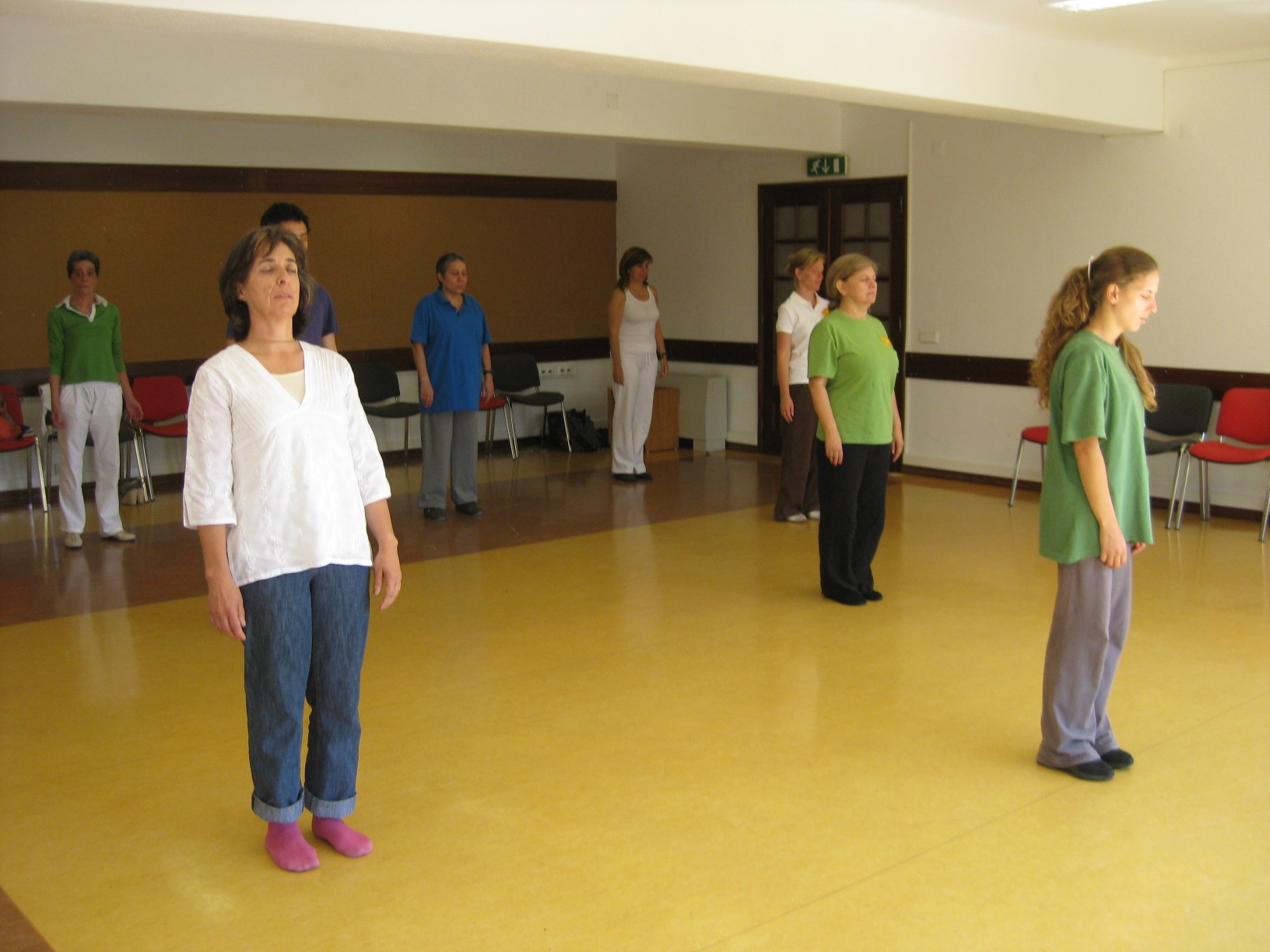 As we in Shaolin Wahnam are so used to chi flow, some of us may not realize it is a top secret

Dear Sigung,
As I know you are so busy I generally don't write, but after discussing an unusual chi flow of mine with Mark Blohm recently, he agreed it could be good to write

It is nice to hear from you. I still think fondly of the time we were together on the Galapagos Islands. It was a memorable visit for me. Once again, thank you for making that visit possible.

It is good that you write to me about your recent experience. Please feel free to write whenever you have any questions.

When I entered chi flow I started acting out stabbing myself with violent thoughts. I'm aware that I've been cleansing some deep rooted anger towards myself and that for whatever reason I've unconsciously wanted to punish myself, surely because of past life events.

Yes, you are undergoing karmic cleansing. In some literature, it is described as erasing bad karma.

You should change the thought of punishing yourself to being grateful that you can cleanse off previous bad karma. Thoughts are very important and they create reality. 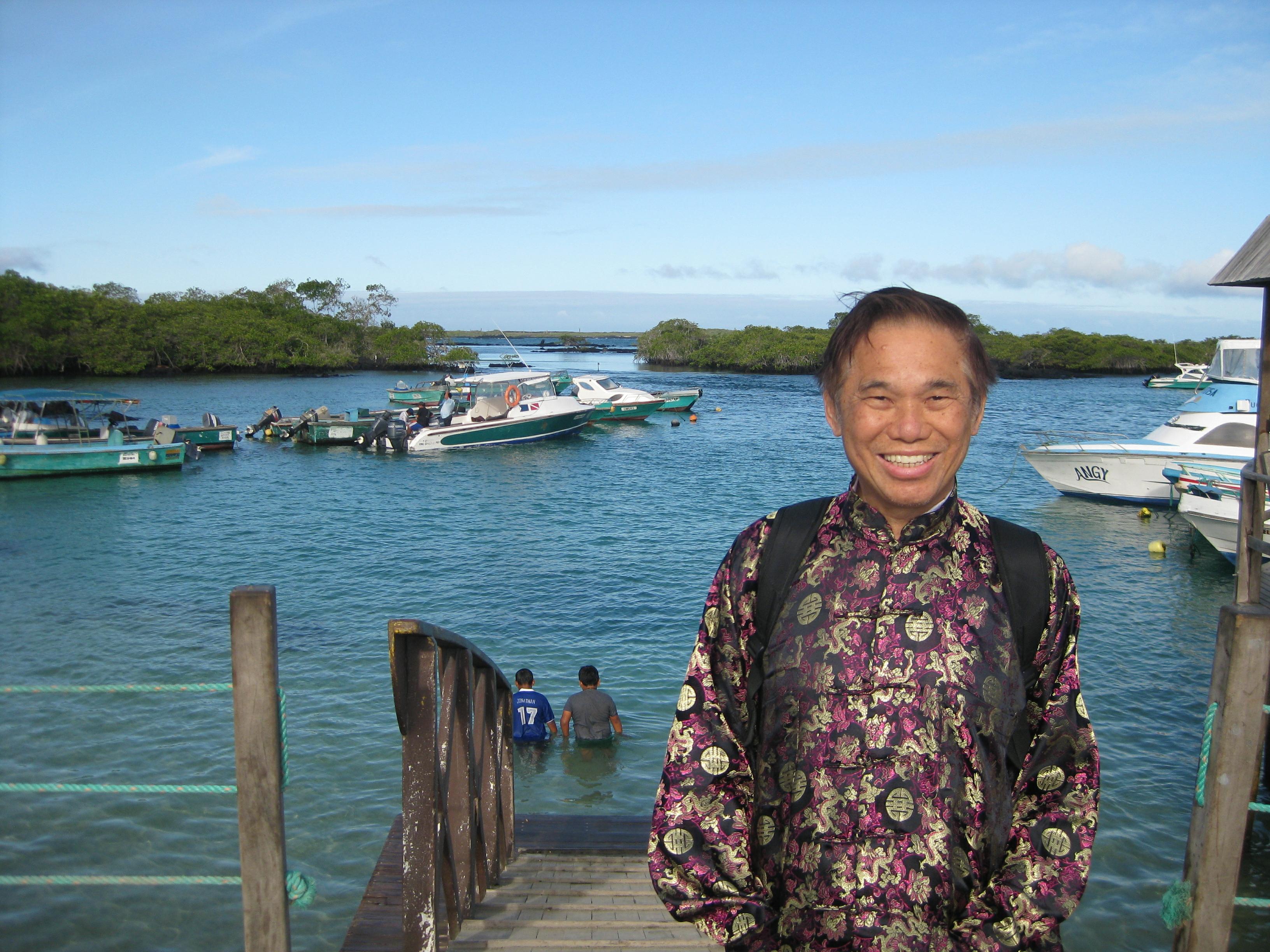 Grandmaster Wong at one of the Galapagos Islands

I just let it go and kept flowing, and after a minute or two I was flowing silently, and then all of a sudden I felt like I had a dark demon floating behind me. For a number of years I've been clearing a big blockage at my heart and one at my dan tian, and it felt like the demon had something like a spiky leash that connected to those blockages through my back.

I also then saw in my mind a face with blood around the mouth, like a vampire. I did my best to keep flowing, but felt apprehensive about releasing whatever it was into my grandparents' home where I was currently visiting.

What you did was correct.

It was considerate of you not to cleanse out the demon into your grandparents' home. If this happened next time, you could go outside or to a window, preferably open, if the weather outside is too cold, and release the demon. Bless the demon wherever you are.

I wasn't sure if this was my imagination, a real demon or just my mind's way of perceiving what was nothing more than negative energy. I finished my session but felt a little strange afterwards.

I would take this opportunity to mention a common situation many people fall victim to. Many people, but obviously not you, intellectualize and worry unnecessarily about possibilities, but do not take any appropriate action.

For example, if their train is late or if they fall sick, they intellectualize why the train is delayed and what will happen when they arrive late at their destination, or was it the food they ate at a restaurant that causes the sickness and what will happen to their work now that they are sick. It really does not make much difference which one of the possibilities is the actual reason, It is more important for them to call their friends to inform them that they may be late, or see a doctor to get well. 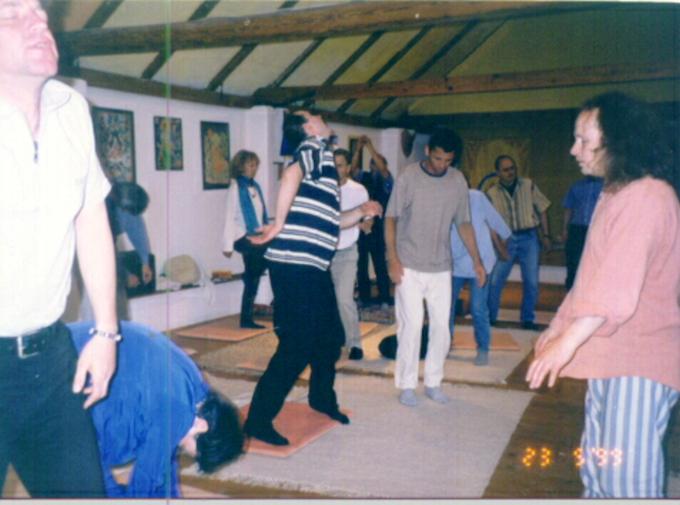 A vigorous chi flow is effective for karmic cleansing

Sigung, is it possible to carry a demon even after what has been 7 years of chi kung and prayers? Is it best to avoid releasing something like that indoors? It's not bothering me, but it was certainly the first time this has happened.

Yes, it is possible. Seven years is a very short time compared to many life-times.

Yes, it is best to avoid releasing bad energy, including a demon, indoors. If we practice indoors, we ensure ventilation is good so that bad energy like toxic waste can be disposed off more easily

In general my practice has been great. Attending the intensive course really changed my practice and my life and I hope to attend another soon.

I am very proud of your progress, though it is actually expected. Just imagine, seven years ago you could hardly walk but now you can run and jump.

I remember, quite fondly, the time on the Blue Mountain when I asked you to jump up a low wall surrounding the training hall. Other people outside our school might think I was cruel. But I am sure with hindsight you now realize I had to be harsh to be kind. I was, and still aim, very proud of your action. Despite much difficulty, you did what I told you to, without any hesitation. I knew at that very moment you would recover.

When the opportunity arises, you should consider attending my Small Universe Course. Many students have told me that the Small Universe Course has enriched their life beyond their imagination -- and not just in matters related to chi kung. I don't offer the Small Universe ourse often, but you can check up on my website when it is offered. This course is by invitation only, but if you missed the invitation, please still apply to my secretary. I won't want a deserving student like you to miss such a course.